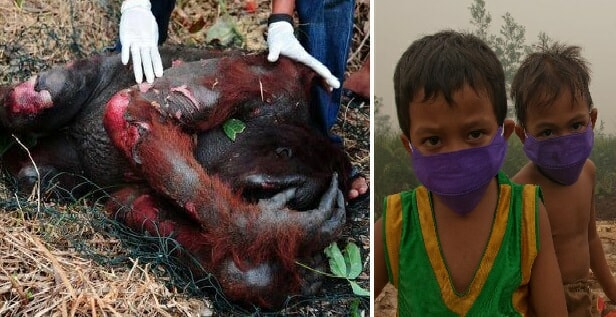 Every year, Malaysians suffer from a thick haze enveloping the country thanks to our neighboring country, Indonesia. It’s as if it’s an annual ritual that they have to do: burning mother nature. This year, mother nature decided to fight back and the forest fire was spread out of control.

The reason behind this destruction is because the Indonesians are using an inexpensive slash-and-burn method to clear vegetation for palm oil, pulp and paper plantations

Due to the massive deforestation carried out, millions of Malaysians, Singaporeans and Indonesians themselves suffer from respiratory ailments – at least 19 died from breathing in the smoke.

However, humans aren’t the only one affected.

The Indonesian forest, home to several species of primates and other vital habitats are being destroyed.

Horrible images of the deforestation’s after-effects are being circulated, yet it doesn’t stop the country. You may well expect the haze to return the following year.

Orang Utan’s population are the most threatened. The ones who survived the fire no longer has shelther nor food.

Indonesian officials have consistently dismissed the complaints of its neighbors regarding the haze. Vice president Jusuf Kalla said: “For 11 months, they enjoyed nice air from Indonesia and they never thanked us. They have suffered because of the haze for one month and they get upset.”

The haze has gotten so bad that many has said it to be a “crime against humanity”.

If you thought the hazy condition in Malaysia was bad, you’d be shocked to know how it must be in the country itself.

Where the Sun don’t shine: It’s hard to tell whether it’s day time or the evening.

At this pace, Orang Utans could be extinct within the next couple of years, with their jungle habitats being depleted entirely by 2035 – causing extreme consequences to our climate due to the release of carbon dioxide into the atmosphere.

Outrage citizens from Malaysian, Singapore and Indonesia are protesting against the ‘slash-and-burn’ method. Hopefully the government will finally heed the pleas of the people.