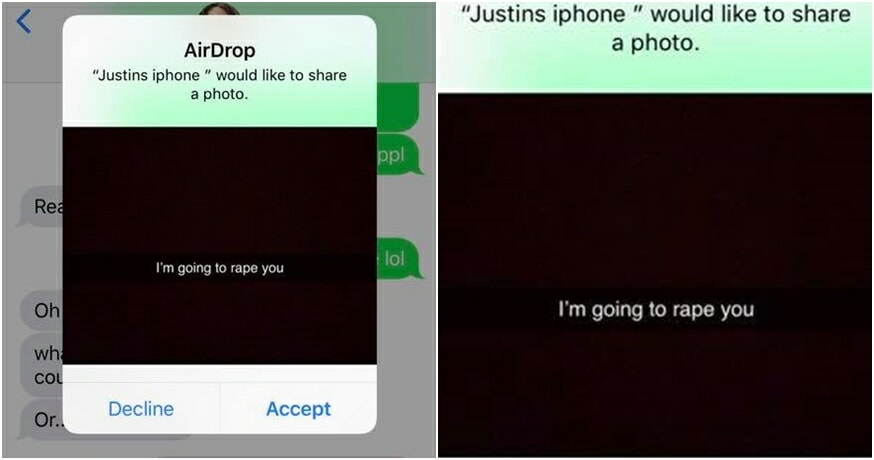 While we may think that society has progressed far enough that women need no longer feel afraid of stepping out alone, repeated incidents of bad behaviour continue to prove that we still have plenty of work to do, where creating safe spaces are concerned.

In a Facebook post shared recently by Robyn Kimberly Dobson, she recounts her terrifying experience while riding a public bus alone in British Colombia, Canada. Her journey, which began at Newton Exchange at 11.00pm, was supposed to have taken her to her friend’s home where they were meant to have a late dinner together.

Upon boarding the bus, she suddenly receives an AirDrop request from an anonymous man, with a very chilling message.

The sender, presumably a man named Justin, was declined immediately. For non-iPhone users, AirDrop is a feature that allows Apple users to seamlessly share files directly between one another. Immediately, Robyn felt a sense of palpable unease run through her body and she decided against getting off from her usual stop, which would have necessitated a ten-minute walk alone after the bus ride to arrive at her destination.

Robyn took a screenshot of the rape threat that was repeatedly airdropped to her iphone,

“I sent a screenshot of the AirDrop request to my friends. One of them immediately asks where I am getting off the bus so that she can come and pick me up.”

Robyn’s friend, who lives in an area called Willowbrook, was only a short distance away from another stop her bus had been heading towards. But what makes the experience all the more hair raising is that not only did ‘Justin’ send the image once, he sent it to Robyn repeatedly, over and over. In fact, she received the same AirDrop image with the rape threat three times.

“The same AirDrop image request comes through again and I decline it immediately. I look around, but not fully. I’m afraid and my palms are getting clammy.”

Caught up in fear, she immediately contacted the authorities, who tried to get as much information out of the situation as possible from Robyn. As she communicated with the authorities and passed by a number of stops, one man after another in the bus alighted, before leaving Robyn as the only remaining passenger in the bus.

Upon reaching her stop and meeting up with her friend, local police told her that due to the untraceable nature of AirDrop files, it is likely that some of the passengers had been sending her the rape threat to watch people’s reactions. While she has no concrete evidence, Robyn does mention that most of the men who were with her on the bus were young and in their late-20s.

“It’s extremely upsetting that as a society we are raising young “men” who think that rape is a joke that can be used to get a rise out of people.”

Her post, which has since gone viral across social media internationally, has raised many concerns regarding the safety of vulnerable members of society, who despite efforts made by the authorities, continue to be at the mercy of such awful acts. Robyn also goes on to add that perpetrators of such ‘pranks’ may not think much about what they do or the effects they leave on their victims.

If you or anyone you know has faced similar situations in Malaysia, please contact the relevant authorities such as the government’s Talian Kasih Hotline 15999 or the Women’s Aid Organisation hotline at +603 7956 3488.