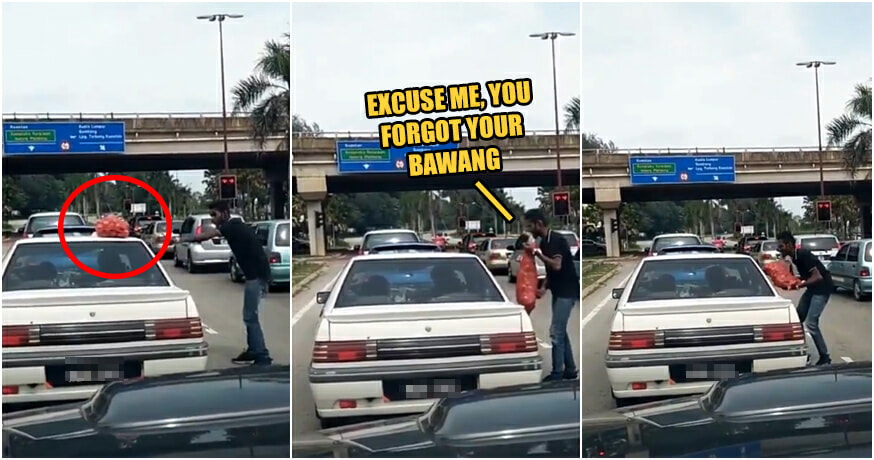 Whether we realise it or not, the roof of our car more often than not, winds up being a really good place to place our belongings when we have our hands full unloading groceries or shopping into the boot. After all, with the boot-lid open, the roof seems to be a perfectly logical and reasonable solution to keep our stuff off the floor. If touch the ground then dirty la weih.

It was a whole sack of bawang merah aka onions.

Shared by netizen @anthraxxxx over Twitter last Thursday (6th August 2020), the video shows how the driver of a white Proton Saga had somehow forgotten that they left an entire sack of onions on their roof and managed to drive around without it having slipped off.

In fact, were it not for a concerned motorist who got down from his own car at a stop light to inform the driver of their bag of onions, its likely that they would have driven all the way to their destination with their onions remaining dangerously on the roof of the car.

Thankfully, what could have potentially been a hilarious but no less dangerous situation was resolved quickly when the concerned motorist helped removed the bag of onions and hand it into the occupants of the car. The video has since been shared over 20,600 times over Twitter, with many netizens chiming in with their own experiences of leaving their own belongings on their car roof.

So if you tend to make it a habit to place your belongings on the roof of your car, make sure you check first before you drive off!