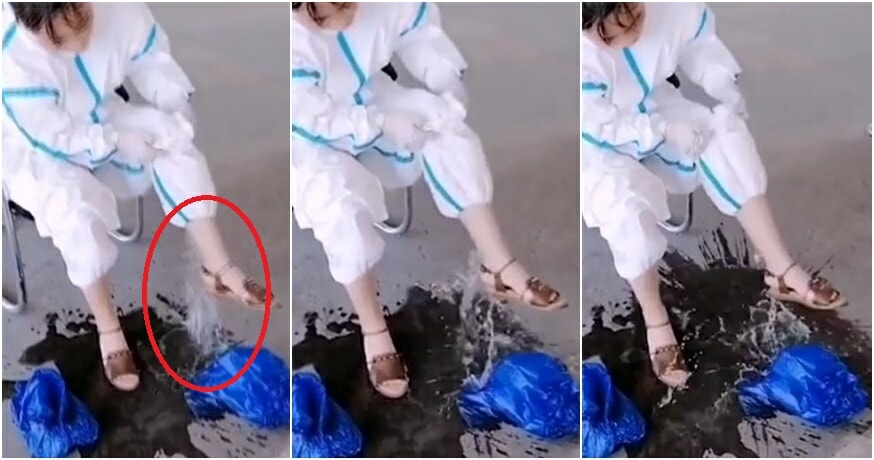 When it comes down to sacrifices, those who work on the medical frontlines have gone above and beyond to ensure that the well-being of the public remains safe. This is especially true in light of the global pandemic that we are seeing now, with doctors and nurses alike working around the clock, rain or shine, in the name of sworn duty.

In some cases, these sacrifices have come to manifest in very tangible forms, whether it be the bruises that these medical workers endure on their faces from wearing protective shields daily, or in this case, what appears to be gushes of sweat pouring out from one frontline medical worker’s PPE suit.

Just recently, a frontline medical worker from China became the subject of media attention after video footage was captured of her in the process of removing her PPE to take a break, only for what has been described as ‘buckets of sweat’ to pour from underneath her suit.

According to state-backed media agency People’s Daily Online, the video was taken in Xinjiang’s capital city, Urumqi. With temperatures in the city averaging 29-degrees Celsius, one can only imagine how difficult it must be for medical workers to carry out their responsibilities under the sweltering heat while clad completely in protective equipment.

This comes after Urumqi became the subject of a Covid-19 outbreak sometime in July, resulting in over 531 cases. However, the city has since declared the outbreak to be ‘under control’ after drastic lockdown measures were taken to stamp out the chain of transmission within the local community.

The video, which has since been viewed over 5 million times, has garnered plenty of praise by netizens across China, many whom extended their gratitude to those who continue to serve on the frontlines.

It is times like these where we are reminded the sheer extent by which our frontliners have gone for the sake of keeping our country safe. To those who have served and continue to serve on the field, we extend our deepest gratitude.