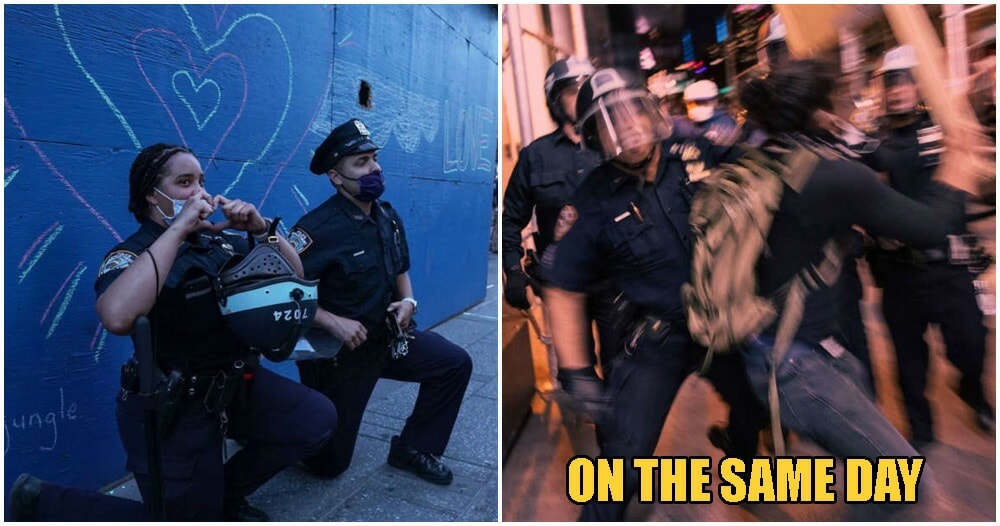 Disclaimer: The featured image was taken from Truth Out which shows two NYC police officers taking a knee during a demonstration by protestors on 31st May on the left frame. The right frame shows the NYC police clashing with protestors that same evening.

If you’ve read the news recently, you would’ve seen some seemingly genuine photos of police officers “taking the knee” or standing in solidarity with those who are protesting for the Black Lives Matter movement. While it’s encouraging to see some of these officers standing on the side of justice, not everything is always as it seems.

Recently, there’s been an uproar on Twitter from netizens and activists who are exposing a few police officers for only supporting the movement when their faces are documented in the front of a camera lens. Once the media gets enough shots of these authorities appearing peaceful, they are said to resume fighting off protestors with force.

They beat the living shit out of us one hour after this. https://t.co/qROFE1YY2R

stop retweeting videos of police hugging protesters, it’s propaganda. they are kneeling with you and authorizing tear gas moments later, they do not care about the people, they care about good pictures for the media

Literally 45 minutes later they maced us in the face for the crime of standing in their vicinity https://t.co/85a6zU2oJy

According to these tweets, some officers will appear to kneel down with protestors on photos shown by the American media. But protestors responding to these photos claim that authorities go back to controlling crowds with violence after just an hour of signalling their solidarity. American news portals, such as CBC and CBS, have also been accused of censoring what goes on during these protests:

You can clearly see the difference between the MEDIA video and THE REAL VIDEO #dcblackout pic.twitter.com/k79l60Opay

this isnt just propaganda, this is a long term strategy to rewrite this event as violent on the protesters side–showing only THIS SIDE in images while finding a way to distract from what the cops r doing. This is a scheme, and they know what theyre doing https://t.co/XWAXJMgkxR

Police officers would only be shown “taking the knee” to show unity alongside these protestors on mainstream media. However, netizens claim that showing only this side of the police rewrites protests as “violent on the protestors’ side”.

“Taking the knee” became a demonstration of anti-racism when former quarterback, Colin Kaepernick, started kneeling during pre-game renditions of the national anthem in 2016 to protest police brutality against black people and other minority communities, as reported by Independent. Since then, the gesture has been used by celebrities, famous sports figures and authorities to show support and outrage against racism.

thats not the point of the message; its analyzing a fascist system before it happens. Same protests where this stuff happened turnes violent once press left too, so its an effort to be cautionary. pic.twitter.com/Bxdw4O7qaK

While it is acknowledged that not every police officer has the intent of using this method to turn against protesters, these tweets are directed towards warning those who actively engage and share content which only showcases enforcers of the law in a positive, peaceful light without acknowledging all the violence that takes place behind the scenes.

‘Don’t kill em, hit em hard’
I WANT EVERYONE TO SPREAD THIS, I don’t want to see it deleted anywhere, share it so everyone knows to stay safe!#BlackLivesMattter #seattleprotests #TrumpOut2020 pic.twitter.com/lRe8f23yuH

Also read: Man Who Fed Cops For Free Gets Fatally Shot While Trying To Protect Niece