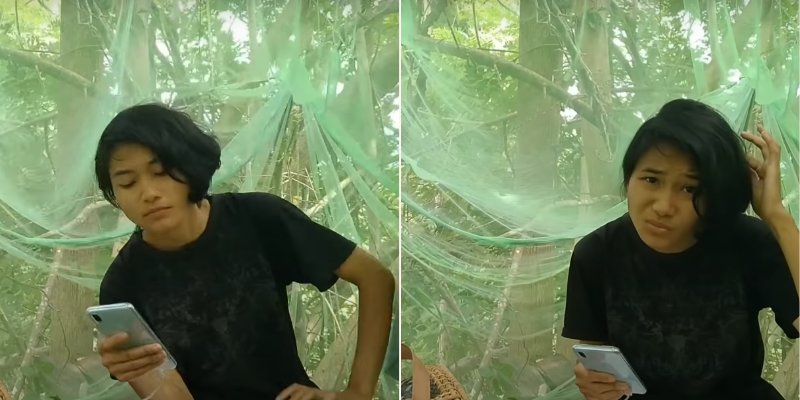 A lot of teachers are feeling discouraged after students used the Covid-19 lockdowns as a way to evade their educational responsibilities.

While some pretended they didn’t have homework and others just left their designated WhatsApp groups, thankfully, there are still a few students out there who are dedicated to their education and are willing to go above and beyond to show it.

Veveonah Mosibin, a foundation student in Sabah, spent a good 24 hours in a tree just so she could find sufficient internet to complete her online exam, as she showcased on her YouTube channel.

In the video, Veveonah explained that she had not originally planned to do the exam in a tree as she managed to build a hut on top of a hill with a good internet connection, but she had found the hut to have partially collapsed due to strong winds and heavy rains, hence, she had to come up with a quick solution.

She then quickly decided that the top of a tree would be the next best option.

Armed with a phone, a power bank, a bottle of water, some food, a mosquito net and other tools to aid her for her exam, she quickly set up her treetop spot and her 24 hours began.

The 24 hours she stayed in the tree was not a walk in the park, as she was unable to sleep well at night due to the cold and the weird noises in the night.

She also had a brush with an Asian ‘murder hornet’, which somehow ended up within the mosquito net.

Despite the challenging environment and her lack of resources, she never once complained about her situation and showed an immense knowledge and resourcefulness of her surroundings.

All so that she can take her exams.

Veveonah usually taps rubber early in the mornings and works at her family orchard so that they have enough to eat. Her family also usually sleeps by 7pm to conserve candles as their village does not have access to electricity, she shared in the video while having plain rice for dinner.

Students should be grateful for how easily accessible electricity, education and the internet is to them and yet, they take it for granted on a daily basis while there are students like Veveonah, who are willing to risk their safety just so they could take their exams like everyone else.