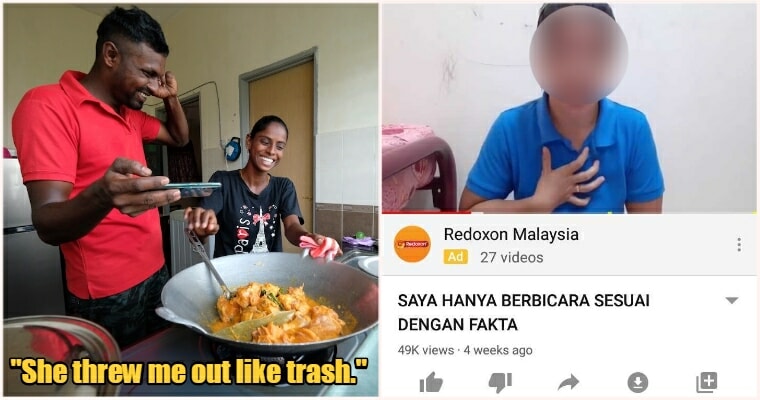 It’s no secret that Sugu Pavithra has become a Malaysian online sensation overnight, with her easy to follow recipes of delicious Indian cuisine on YouTube.

Well, it turns out that even Sugu had to learn how to start up her YouTube channel from someone else, her neighbour who also runs her own cooking channel with over 88,000 subscribers! But unfortunately, her Indonesian-Malaysian neighbour seems to be somewhat upset with Sugu for surpassing her number of subscribers. 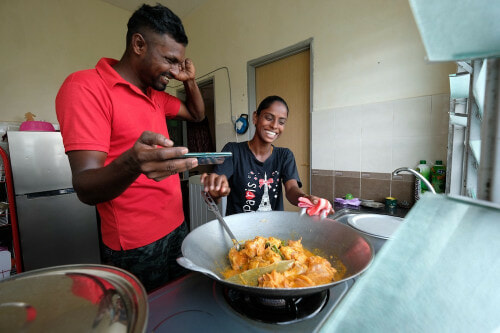 The neighbour, who’s YouTube channel is called Kakak Sri disini, took to her channel to ‘clear the air’ after she had posted and since deleted a video which allegedly slammed Sugu for stealing her thunder.

In a new video titled ‘Saya hanya berbicara sesuai dengan fakta‘ which translates to ‘I only speak according to the facts’, she spoke about how she was receiving comments from netizens who bashed her for being jealous of Sugu.

In the video, she explained how she had apparently taken time out of her busy day to teach Sugu how to create the channel when she could have been feeding her children. She went on about how Sugu had thanked her profusely and told her that she won’t forget her if she made it big.

“Maybe she has hit the expectations that she saw for herself and people ask me if I’m jealous, no. I’m not jealous. But try looking at it from my position, I’ve helped her time and time again, and she said she wouldn’t forget me but at the last minute she threw me out like trash,” she said.

She went on to elaborate on how Sugu had apparently caused certain YouTubers who reviewed her cooking to receive warnings from YouTube. Kakak Sri added that Sugu allegedly only allows channels with high views to review her recipes. 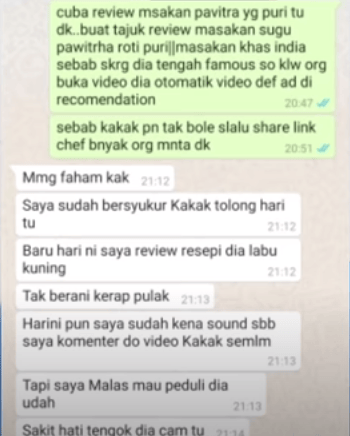 In the screenshot of Kakak Sri’s conversation with the YouTuber, they revealed that they did a review on Sugu’s pumpkin recipe, only to get scolded.

But that’s not all, she also said that Sugu was supposedly unhappy with the fact that she had supporters who were Indian.

“She knows that not only does she own race support her but many other races as well. The whole of Malaysia and even Indonesia supports her. Why is she causing issues about Indians supporting me?” she added. 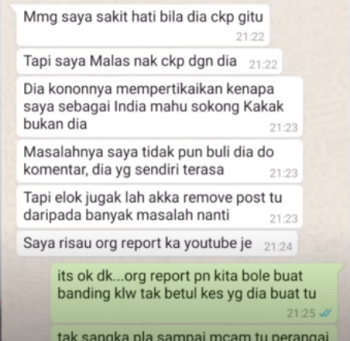 Netizens were not too happy with this video as to them, it felt like Kakak Sri was only trying to make Sugu look bad. How true are these allegations? We don’t know.

This drama has caused quite a stir among the Malaysian YouTube community. We believe that it’s only right that Malaysians should support each other so that everyone can grow, may it be at their own individual paces.

We genuinely hope that Kakak Sri and Sugu can put their differences aside, be happy for each other and also champion other up and coming Malaysian YouTubers.