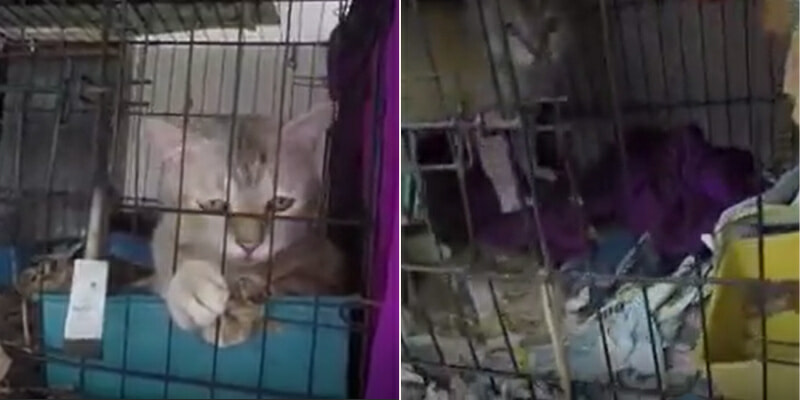 We used to feel so bad for stray animals, considering how they have to struggle to find food and run from strangers who could harm them, but we are starting to realise more that having an owner isn’t exactly the best either.

A pattern of pet cats kept neglected in cages is starting to emerge and it’s rather alarming.

The Malaysia Animal Association took to their Facebook timeline to showcase pet cats locked in cages surrounded by their own filth in Penang.

They wrote, “Malaysia Animal Association receive complaints from neighbours who can no longer deal with the stubbornness of an owner who refuses to take advice and cannot be reprimanded. Faeces is piling up in the cages of their pet cats. This situation has been dragged out for months.”

The worse part is that this entire situation could cause a breakout of disease.

“The cats that are being kept in front of a house at a low cost flat in Bandar Bayan Baru, Penang, is truly a disturbance and discomfort not just to the cats but also to the neighbours due to the smell. It is also feared that disease could spread to both residents, which are the cats and the neighbours,” they added.

The owner clearly couldn’t even take care of one cat, yet they decided to get so many, leaving all of the prisoners in their own filth.

“It’s best to keep in mind that keeping a large number of cats without much supervision and discipline towards cleanliness in a flat is cruelty and can cause disturbances.”

These poor cats deserve to be freed from those cages and allowed to breathe fresh air like the rest of us. We genuinely hope that the authorities will save them from the hell they’re currently living.