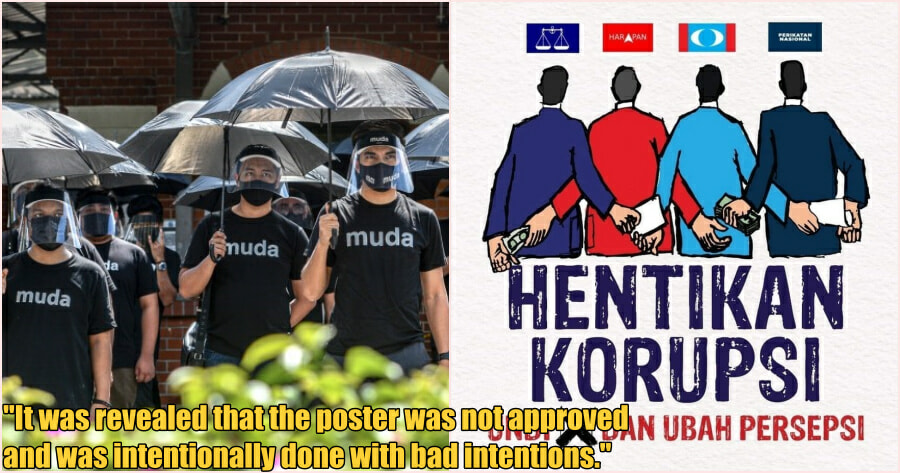 Former Youth and Sports Minister, Syed Saddiq’s political party, MUDA, has recently found itself in plenty of backlash for trying to politicise issues such as luncheons.

However, MUDA was recently slammed even more after they had released a poster urging a stop to corruption whilst also implying that other political parties and coalitions such as BN, PH, PKR and PN are all involved in the practice. 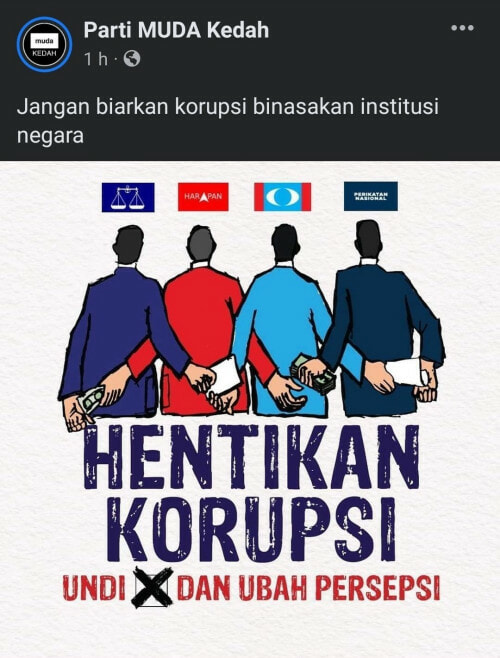 The post has since been deleted, but social media users were quick to slam the party for the posting in the first place, especially as it was also recently announced that MUDA had been given the blessing of two PH parties to contest for 6 seats in the upcoming Johor elections.

Users criticised the party for the poster

Social media users quickly expressed their disappointment and anger at MUDA for even creating such a poster.

It even caught the attention of DAP’s Ketari assemblyperson, Young Syefura Othman as well as Syahredzan Johan who is a prominent lawyer and political secretary to veteran parliament member Lim Kit Siang.

Syahredzan went on to engage in a back and forth with MUDA Negeri Sembilan’s information chief on Twitter, who claimed that the objective of the poster and the colour themes used is based from the input of other things.

“It has nothing to do with the logo or flag of a political party. I’m sure about that. We respect each other. Stay positive.”

Redzuan revealed that the intended poster was not supposed to have the logos of the political parties on top. “They mistakenly uploaded posters with logos.”

Sorry I know you're in NS, tapi you je layan saya pukul 2 pagi so I need to ask.

Redzuan explained that the colour theme used has no relation to the flags of political parties, but instead, a colour tone was used.

Despite his explanation, users were not convinced

Malaysians were still not convinced. Many stated that out of the many different colours that exist, they seemed to intentionally pick the ones that are related to the major political parties and coalitions.

“There are so many colours to choose from: orange, purple, grey, pink, magenta, salmon… what kind of excuse is that,” said a user.

Another said, “It is truly ironic that you have chosen the 4 colours which are familiarised with the colour of the parties, but not even one was wearing a black coat, even though that is a basic colour for a coat.”

“Oh I forgot, black is the colour of MUDA…”

“I understand there is a colour theme or whatever. But how can you ‘accidentally’ make a version with the logos and ‘accidentally’ upload that version,” questioned another netizen.

MUDA has issued a statement of apology

Following the backlash, MUDA has recently released a statement apologising for the poster. The statement reads, “Discussions with Kedah’s MUDA information department revealed that the poster was not approved and was intentionally done with bad intentions.”

MUDA’s national information chief Luqman Long said that they have since decided to suspend Kedah MUDA information from any MUDA related activities.

“So, I apologise for this untoward incident and stand ready to take responsibility as the information chief of MUDA with any decision and disciplinary action from MUDA,” he added.

What do you think? Honest mistake? Or something done with ill intent? Let us know in the comments. 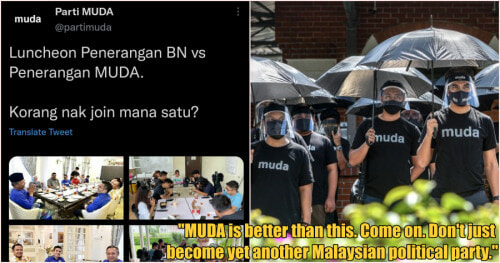