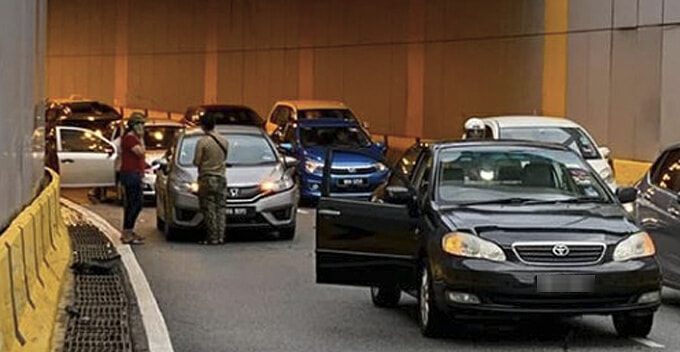 A female netizen recently took to Facebook to share how her car suddenly lost control and caused a multiple-vehicle collision due to the tampered road surface. This incident happened at the tunnel en route from Taman Tun Dr Ismail (TTDI) to Lebuhraya Damansara-Puchong (LDP) on 2 January. 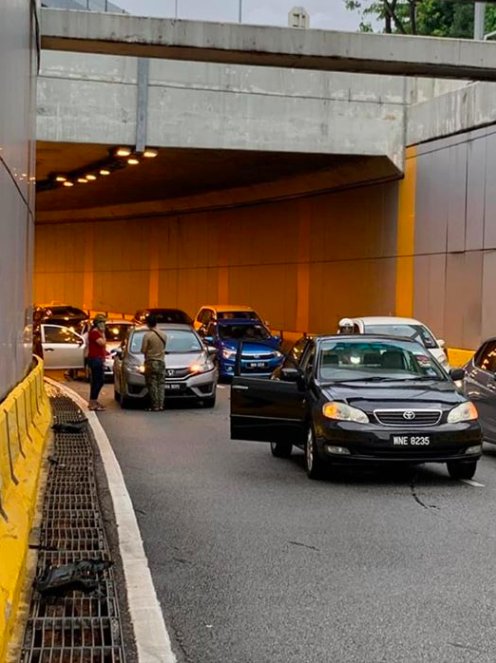 “I was heading home using this tunnel after I finished eating with my friend. She (the friend) reminded me to drive slowly as the road tends to be slippery on a rainy day. So, I slowed down although I wasn’t even driving fast in the first place.

“That’s when my car started losing traction. The road was extremely slippery as if someone had poured oil on the surface. I had no control over my car and no matter how hard I stepped on the brake, my car just wouldn’t stop.

“I tried turning the steering wheel and the vehicle hit the wall before it came to a complete stop. What’s more unfortunate was that the cars behind me crashed into each other, causing a four-car accident.”

One of the drivers involved in the accident said that his car too had suddenly lost control and the brakes didn’t help much due to the slippery road. Within five minutes, insurance agents appeared at the scene to assist the victims and tow-truck drivers showed up in 15 minutes. That’s one hell of a response time!

After informing the policemen at the scene of what had happened, she was told that there’s very little the authorities can do for her due to the lack of evidence. The traumatised victim was grateful that she wasn’t speeding at that time as her car would’ve hit the wall a lot harder if she did.

In just 15 hours, her post had gone viral with over 10,000 shares. Many blamed the culprit for tampering the road condition with oil while a few of them defended the tow-truck drivers.

“Those who’ve never gotten into an accident like this will never believe it. I personally had encountered a similar situation in Genting Highlands. My car spun a few times after I had lightly tapped on my brake pedal. I then got out of the car and saw oil stains on the road,” a netizen said.

“The tow-truck drivers can beat the cops to the scene because they are always out looking for cases like this but that doesn’t mean they are the ones who pour the oil,” another netizen commented.

For some reason, this FB post was later removed.

Admittedly, this isn’t the first case of such an incident and it will not likely be the last. What do you think about this incident? Let us know in the comments!

Update: Investigations by the Selangor police revealed that there was no oil spill on the road as claimed by the woman and that the cars crashed into each other because they couldn’t avoid her in time. 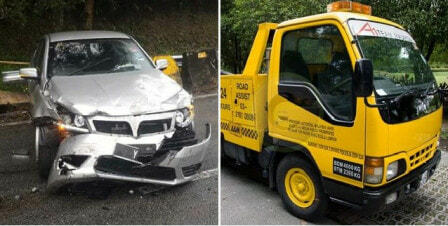