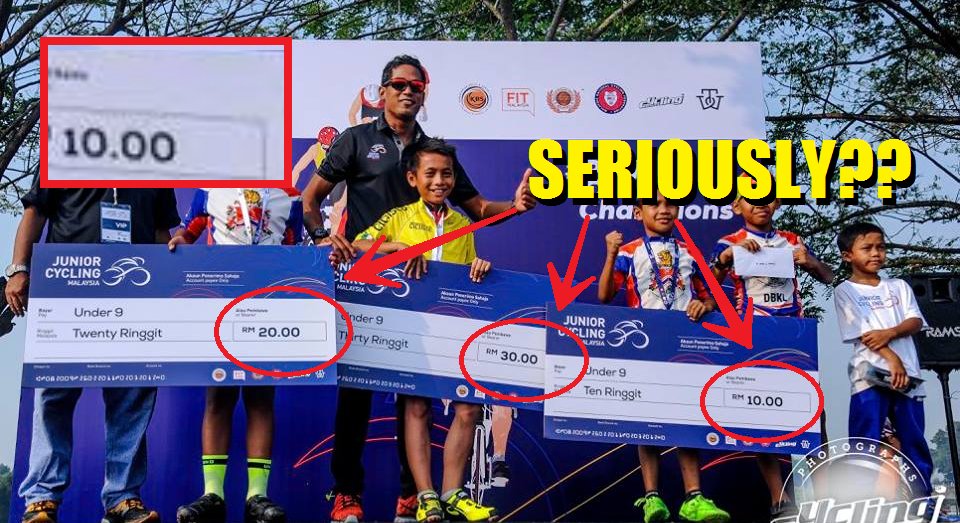 The Junior Cycling Malaysia (JCM) just hosted their first event last Saturday with over 700 participants between the ages 5 to 19 competing in their respective categories. The event was held in Malaysia Agro Exposition Park Serdang (MAEPS.

The event which is organised by the National Sports Council (NSC) was aimed to encourage the younger generation who has a passion for riding to train and compete in cycling.

Youth and Sports Minister Khairy Jamaluddin was at the programme to present the winners with mock cheques and medals.

However, a few pictures in particular posted on Junior Cycling Malaysia got a lot of criticism.

Although the winners in the under-9 category were pictured with smiling faces, Malaysians noted the ridiculous small prize money that was given to them, which was only worth RM10, RM20 and RM30!

The internet joked about it with memes being posted in 9gag Malaysia and MGAG.

Many people expressed their disappointment in the meager prize money. However some shared their more positive opinion on the case. Some mentioned that people should not be too concerned with the prize money especially when the winners are in the under 9 category. It was also said that the event was to instill passion in the young generation and money should not have been the main focus of it.

Olympian, national track cyclist Josiah Ng himself shared his thoughts, saying “Great job on the first event Junior Cycling Malaysia! I see a lot of comments and concern with regards to the small prize money that was given.

“I would like give my point of view. When I was a young racer, I was only concerned about two things. Racing and winning.

“Money came to my pocket because I was able to race a lot and that lead me to be a champion. I have made a very good living from cycling over my 15 year career. Do not focus on money.

“Be happy that JCM is putting on events that will help you to be a better competitor. JCM will help to develop you into a champion. Once you are a champion, the money will come!”

Even so, some people were not convinced and said the event didn’t even give a sijil penghargaan/congratulatory cert to the winners.

What do you guys think? Was the prize money amount an insult to the hardwork being put in the competition or people should not be too concerned about it?