– Story exclusively shared by fellow WOB reader who would like to remain anonymous.

One day, my boss wanted me to contact Anandan, a property manager from another mall so I could learn about the ‘Environment, Health & Safety’ (EHS) report from him. My boss gave me his number, told me to contact him immediately and I did just that. 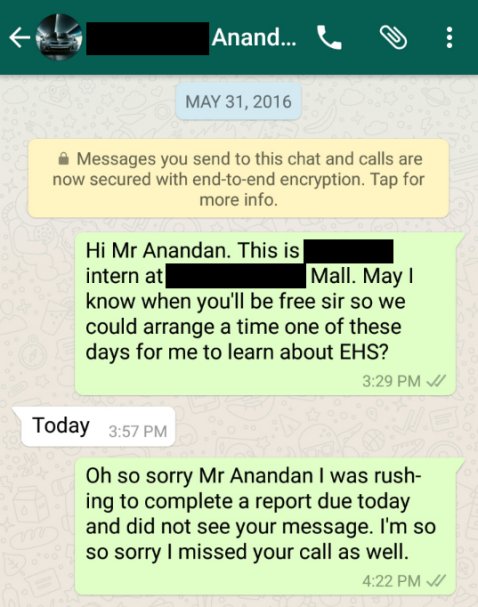 I apologised as I’ve missed two calls from him. After that text, he called me again. I said something along the lines of,

“Hi Mr Anandan, when can we schedule for a meet up? My boss has requested that I learn the EHS report from you.”

He scheduled to meet on that day itself, in Bangsar. I thought it was a little weird that everything was so rushed, but being an intern, of course, I just went with it. I figured he probably had a hectic schedule.

I did all my preparations; had all the reports printed out and bound into a folder. Then I was on my way.

When I reached, we spoke briefly on the phone on a place to meet up. “We can do it over drinks” he said. As someone who enjoys beer, it was okay for me, as long as work is done. Call me naive, but I just have that much faith in humanity. But I guess, never again.

When we met up, he saw me holding a huge file and asked, “What are you bringing?”

Confused, I said, “The EHS report. You’re supposed to teach me this.”

“Oh. Let’s save that for another day.”

Right after he said that, I got so furious. I was basically conned into meeting up with him under the pretense of learning something.

Besides being mad at him, I was mad at myself too. I should’ve just said, “F*CK THIS SHIT I’m out.” but I didn’t.

As much as those words replayed in my head, I couldn’t get myself to say it.

I figured I’d be nice and have one pint of beer, and leave. The whole time we conversed, I dropped hints saying that ‘I’ve a bunch of work to do so I have to go home soon’.

“Oh, work will never be finished. Just do it tomorrow.” he’d reply.

This man was wasting my time. He knowingly exploited the opportunity of an intern who was supposed to learn something new, to his own personal gain. I kid you not, I’ve never felt so disgusted in my life.

But here’s the thing, growing up in an Asian culture, it’s not like us to voice out or be rude. I just took this all in, no matter how much I wanted to storm off from the deceit.

He even told me his personal life stories which were all very very appalling by the way. That he has a wife and few kids, but he still keeps contact with his girlfriend from China, and occasionally travels there while she took care of him.

He even tried to order another set of drinks which I had to outright refuse because he was being very persistent. He also tried to offer to drive me to work. “Why couldn’t I just ask him to f*ck off” I kept telling myself. But it’s way easier to have it in your mind than actually do it.

This guy then tried to arrange another meet up with me, which I obviously refused. Again, he was very persistent and I had to say ‘no’ for God knows how many times. Seriously, take the hint f*ckface.

After this incident, I told myself to always speak my mind. If that person deserves to be asked to ‘f*ck off’ then do it. It’s not being ‘rude’, because if you don’t, at the end of the day, it’s you yourself that suffers.

Unfortunately, it’s not uncommon to hear about sexual harassment at work. Although he did not touch me, but what he did was already harassment – he outright abused of his authority and made me feel violated. And I admit, it’s hard being in that situation because he’s the ‘boss’ and I’m an intern under evaluation. Imagine full-time workers who have to go through this, with their jobs on the line.

Anyway, I hope my story will give courage to every female and even male out there. To be ‘rude’ when you need to and never put up with these situations. It’s easy to comment saying, “Just slap him la”, “If it was me, I would’ve scolded him and left.”. But when it really actually happens to you in real life, you’ll realize it’s really much much harder than you thought.