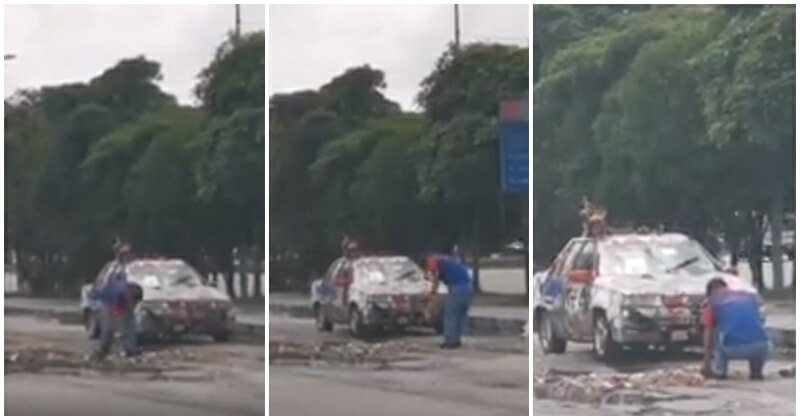 As we all know by now,  Malaysians have long suffered from badly maintained, pothole-ridden roads.

To make things worse, these badly maintained roads have also become the bane of our existence when these roads impact the flow of traffic and even become the cause of traffic collisions.

With the Ministry of Works suggesting that the situation may not be improved in the near future due to budget constraints, samaritans began popping up and taking matters into their own hands.

This uncle in Johor is one of them.

Taking place in Taman Perling,  Johor Bharu, one uncle driving a unique Proton Iswara was seen filling potholes for the benefit of the masses.

Shared on Facebook page Persatuan Bangsa Johor, the status commends the uncle for his efforts, adding that the Pihak Berkuasa Tempatan in the area is simply irresponsible in doing their job.

To be fair, the angry tone of voice shared by the page was not out of place, as they likened the potholes to small ponds!

Commenting on the video, several netizens began slamming the local government for not taking responsibility in making the lives of people in the area safer.

“Nowadays the people can no longer depend on the local government to care for their livelihood. Instead, they have to depend on each other for help.”

We understand that there are honest civil servants out there, but this one surely takes the cake.

We would like to thank the uncle for his act of kindness which should turn the heads of local authorities and urge them to do better. 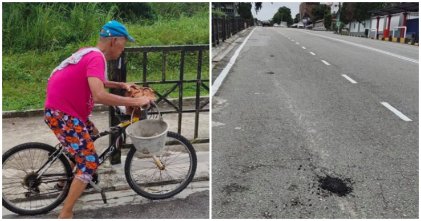