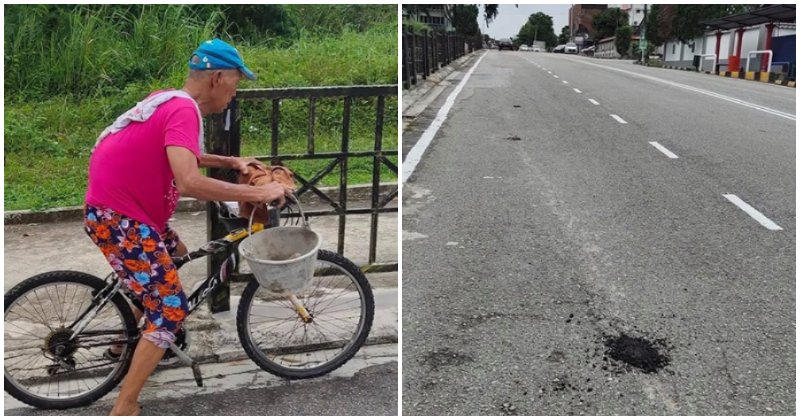 One of the things Malaysians hate having to go through are our roads, considering the one thing you can count on us to complain about is the jams. But even if the roads were to be clear, there’s definitely another thing on them – or in them, rather – that really grinds our gears.

Fortunately for the residents and active users of the roads in Taman Pelangi, Johor Bahru, there’s an unexpected angel going around fixing them. An old Chinese uncle on a bicycle has been spotted by a motorcyclist carrying a little bucket of tar going around filling potholes.

As shared by Mohd Faizal on the Persatuan Bangsar Johor Facebook page, he had spotted someone squatting over in the middle of the road around Jalan Kuning.

“I was on my bike heading down Jalan Kuning, Taman Pelangi, JB when I saw someone squatting in the middle of the road. When I looked closely, it was an old Chinese senior citizen who was hunched over filling up holes in the middle of the road. I have no idea where he got the tar that he’s carrying in his bucket from, going up and down the roads. May Allah repay this uncle’s good deeds!”

Netizens who recognised the uncle based on the post have since spoken out about how the friendly and caring uncle goes to great lengths for the wellness of his neighbourhood.

This comment reads, “This uncle has helped his community a lot. The traffic lights were out once as it was raining heavily, he stood in as a traffic warden, helping to direct traffic. He didn’t care that he was drenched. Another thing is his memory is very strong. He’s asked me how and where my daughter was. After all, he’s known my daughter since she was in standard 5. 10 years later and he still remembers my eldest daughter.”

This comment goes, “Everyday I meet this uncle during my letter deliveries in Taman Pelangi. Everyday he’ll greet the postmen, asking if we’ve eaten..”

He’s clearly a shining example of model citizenship and his community obviously loves him for it.

Persatuan Bangsa Johor’s posting has since garnered over 90 shares.

Let’s hope the community cares for him as much as he cares for them. 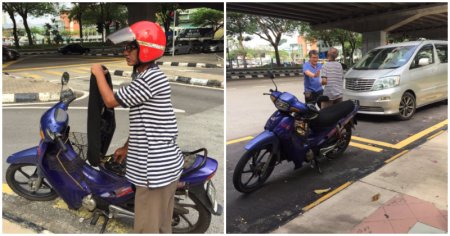