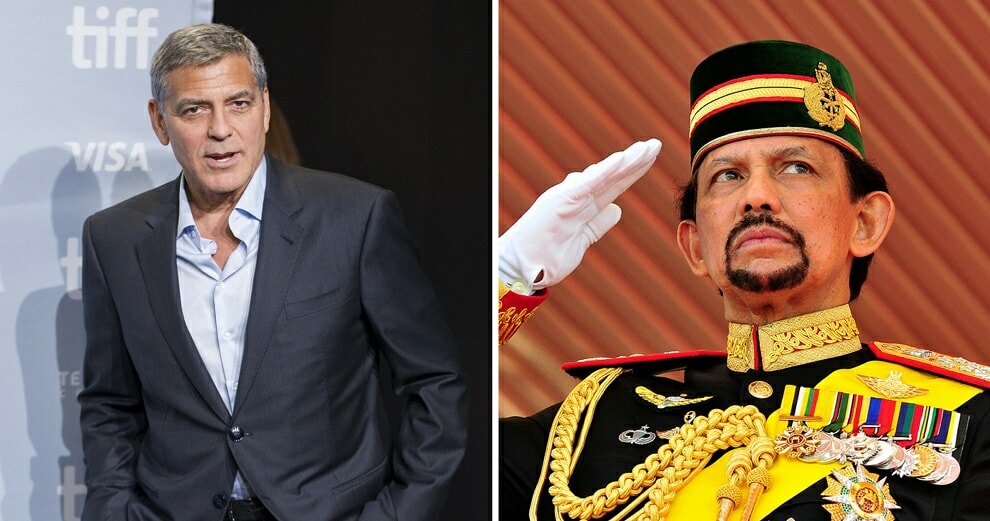 Just last week, the Brunei government announced that it would make same-sex relations and adultery punishable by death beginning 3rd April this year (2019).

According to this new law, any individual caught engaging in same-sex relations or adultery will either be whipped or stoned to death. Prior to this, Brunei previously sentenced people engaging in these relations to 10 years in jail. The country is also set to introduce amputating the hands of convicted thieves.

The announcement of this new law prompted horrified reactions from all over the world. Now, in response to this new law, Hollywood actor George Clooney recently penned an opinion piece for Deadline, condemning Brunei’s move to implement this law. An excerpt from his article reads,

“On this particular April 3rd, the nation of Brunei will begin stoning and whipping to death any of its citizens that are proved to be gay. Let that sink in.”

“In the onslaught of news where we see the world backsliding into authoritarianism this stands alone.”

Clooney referred to the Brunei Investment Agency (owned by the Sultan of Brunei, Hassanal Bolkiah), which owns a number of luxury hotels in the United States, the United Kingdom, France, and Italy, stating,

“They own nine of the most exclusive hotels in the world. Full disclosure: I’ve stayed at many of them, a couple of them recently, because I hadn’t done my homework and didn’t know who owned them.”

The Brunei Investment Agency reportedly owns the Beverly Hills Hotel and the Bel-Air in Los Angeles, the Dorchester in London and Le Meurice in Paris. He added,

“Every single time we stay at, or take meetings at or dine at any of these nine hotels we are putting money directly into the pockets of men who choose to stone and whip to death their own citizens for being gay or accused of adultery.”

Meanwhile, UK singer Elton John shared Clooney’s article on his official Twitter account, supporting the boycott of Brunei-owned hotels. The iconic singer, who is also a member of the LGBTQ community, stated in a tweet,

“I believe that love is love and being able to love as we choose is a basic human right. Wherever we go, my husband David and I deserve to be treated with dignity and respect – as do each and every one of the millions of LGBTQ+ people around the world.”

I commend my friend, #GeorgeClooney, for taking a stand against the anti-gay discrimination and bigotry taking place in the nation of #Brunei – a place where gay people are brutalized, or worse – by boycotting the Sultan’s hotels.https://t.co/8ymurW7hqm

Stoning people to death for homosexuality or adultery is appalling and immoral. Every single person on earth is entitled to be treated with dignity and to live without fear. There is no excuse—not culture, not tradition—for this kind of hate and inhumanity. https://t.co/g208NzeS7l

According to Reuters, in response to the backlash, prime minister’s office of Brunei issued a statement, saying,

“The (Sharia) Law, apart from criminalizing and deterring acts that are against the teachings of Islam, also aims to educate, respect and protect the legitimate rights of all individuals, society or nationality of any faiths and race.”

“I appeal to the government to stop the entry into force of this draconian new penal code, which would mark a serious setback for human rights protections for the people of Brunei if implemented.”

What are your thoughts on this latest development? Let us know in the comments section.