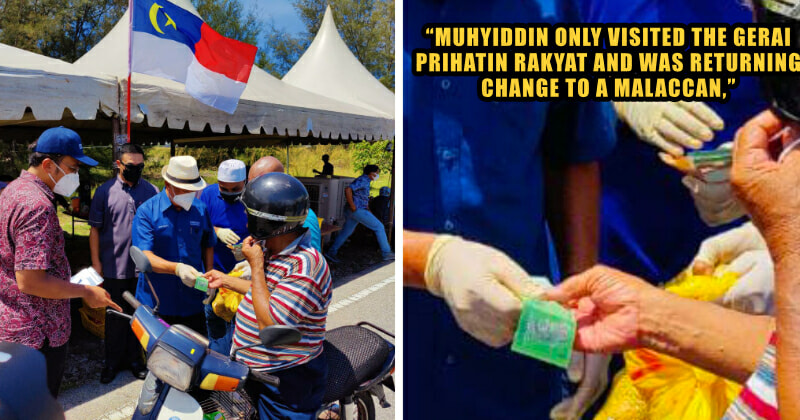 Following allegations online that Bersatu is giving out cash bribes for the upcoming Melaka State Election this 20 November, the party vice-president have come out to quash such claims and said that the cash handed out to an elderly man on a motorcycle by former Prime Minister Tan Sri Muhyiddin Yassin was only him returning change to the individual. As reported by Malaysiakini, Bersatu vice-president Mohd Rafiq Naizamohideen clarified that the photo was taken at a Gerai Prihatin Rakyat in Melaka which sells sundry goods at cheap prices and Muhyiddin was merely returning change to an individual purchasing from the booth.

Earlier, the same exact photo has been shared across social media in Malaysia with many alluding to the exchange being a form of ‘cash bribe’ for Melaka voters. One Twitter user shared the photo and zoomed in to it to highlight Muhyiddin handing out RM5 to an unnamed individual with the caption, “Assalamualikum @SPMRMalaysia.”

Rafiq asserted that allegations of bribery is slanderous and meant to defame Muhyiddin, who is also Bersatu president. He stressed,

“The photo being spread is when Muhyiddin visited the Gerai Prihatin Rakyat and was returning change to a Malaccan worth RM5,

Furthermore, the Gerai Prihatin Rakyat initiative was organised by an NGO which is closely related to Perikatan Nasional which Bersatu is part of. Under the initiative, four selected items, 2kg potatoes, one whole chicken, one carton of eggs and one 200g Milo packet – will be sold for RM15 to one member from households in Melaka earning below RM4,000.

Previously, electoral watchdog Bersih in a statement said that the cheap sales could be seen as a form of ‘vote buying’ and an election offence. The Election Commission (SPR) has since requested Bersih to report the incident should they deem it to be an offence and would only conduct investigation if a report is made. 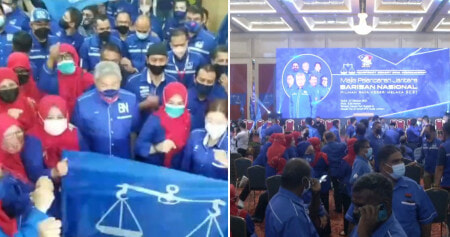