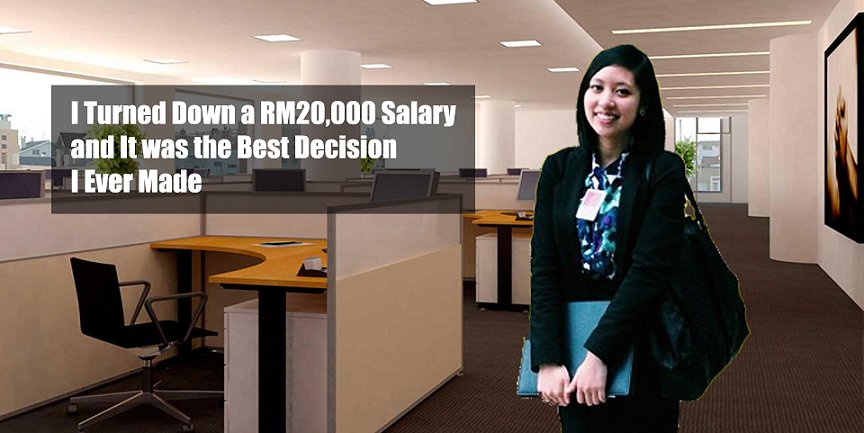 Three months out of college, and two months into my new job, I was given an offer by my CEO. The offer was a raise from my starting salary of $40,000 (RM160,000) to $60,000 (RM240,000) if I stayed, that makes it a whopping RM20,000 a month! Without as much as a flinch of hesitation, I slid my resignation letter across his desk with the same resolve I had when I had written, signed, and sealed it. And even now, when I’m making nowhere near as much, that decision stands as the sanest I have ever made. A salary of RM20,000 a month actually exceeds the median salary of both sexes in 2014 at any age and RM240,000 is more than my household income and a larger number than I had ever known growing up. How did I get to the point of turning down this figure I once thought would be a dream come true?

I felt him approach from behind me, and then it happened again, he rested his hand on my shoulder. The discomfort paralyzed me and my mind started flipping through options for action like it does every time. While he blabbered on about some other project or task I should be completing, I’m not paying attention, drowned out in the noise of my thoughts. My fist tightened.

Should I tell him this time that I’d really appreciate it if he not touch me again? How much of a scene would it make in front of my co-worker? How would he react? What could I say in defense? I should say something. I should do something. I imagined a bad-ass female heroine version of myself flipping him over the desk, twisting his fingers, and delivering my one-liner. But then the moment is over, he patted me again “You’re doing good work Kim, keep it up.”

It was May. I had just graduated and, to both mine and my parents’ concern, I had graduated unemployed. After months of sending out resumes and cover letters without a single interview, agonizing about the uncertainty of my future, I was just about resigned to my pending barista-life. Don’t get me wrong, there’s nothing wrong with doing a job to get by (and trust, me I have), but I wasn’t just looking for a job, I was eager to jumpstart my career. So when, by some magical grace of the heavens, I was offered my first position as project manager with a U.S. federal contractor, it didn’t take me long to decide. 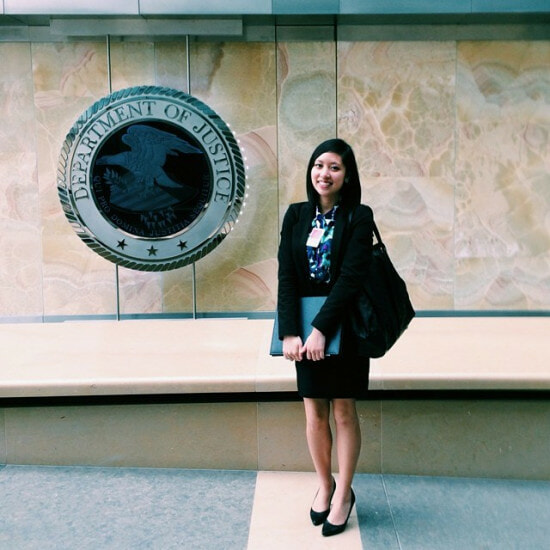 The company was tiny, but that meant I had a lot of opportunities to get out from behind the desk. Within two weeks I was representing my company to contracting officers at the Department of Labor, Homeland Security, and Justice. I was recruiting analysts whose tenures were older than I was, attending debriefs at the State Department, and being escorted through DIA headquarters. At my experience level, I would have never imagined having this sort of access. This is good, I’m getting the experience I need for professional mobility, I thought.

I arrived in the office after attending an analyst recruiting session. Hanging up my suit jacket, I collect the business cards I had received and head over to the CEO’s office to deliver my report.

“I thought it went very well. I had run out of flyers at the end and there were many interested folks, so I got their business cards. I’ll send follow up emails as soon as we’re done with our meeting”

“That’s great. Good work Kim. I bet there were there a lot of men there, am I right?”

“There were some women, but the majority were men, yes.” I wonder why he mentions this.

“You were probably the star there, I can tell,” he smirks and I glance away towards my hands clenching my notebook. I excuse myself.

Working at a small company also met me with more responsibilities. Within three weeks of working, I was made proposal manager of a $20M bid. The demand of the responsibility exceeded my capacity to perform while simultaneously adjusting to the learning curve of my new job. I toiled away as my work day grew from the standard 8 hours to a regular 11 or 12 hours. I was expected, and often demanded, to work weekends. The stress of the environment, the complete lack of preparedness for my duties, and the absence of support from management began to cause me not only sleep-deprivation on a regular basis, but severe anxiety. My request for support was not met with enthusiasm. By the end of the two months of working there, I had racked-up well over 80 hours of overtime and some serious qualifiers for a Prozac prescription.

It was 2:00am on a Thursday night and I walked into the CEO’s office for which I was desperately pleading to be the last time that evening. I hadn’t showered, hadn’t slept. The blood stained deeper and deeper in my eyes as they struggled to stay alert.

He looked up from his book as I handed him my last run of the spreadsheet, “you are not looking so good right now Kim,” he smirked.

OH REALLY? It’s 2:00am, you’re in here with your shoes off reading a book and have the audacity to make a comment on how I look right now?? Fuck you.

If a human glare could sear through physical elements, I would assure you my CEO would not still be working on that desk of his.   I left the office that night, trying to keep awake and my hands from shaking as I started my car. I was at work at 9:00am that day and every minute I had worked beyond 12 hours, I considered slavery.

Working for a small company, there was no HR department that I could report him to. He was the HR. If I brought it up, he would probably dismiss my concerns and claim I was being too uptight, misunderstanding his intentions, or any of the other misogynistic things he could say to excuse his behavior. At times, I would hear him terrorizing my co-worker, another young female in her twenties, about how he didn’t like her attitude. I heard stories about how he threatened to fire another employee once because he didn’t like her attitude. Do you see a trend here? I didn’t want that to be me. This being my first professional job, I didn’t know if other companies would understand. If they called him and found out I was fired, how would I move on with my career? I fought everyday to drag myself into this office and shrug off the degrading shit he says to me, swallow the lump of injustice in my throat, and every night, wash the scum of submission from my skin. I accepted the slave-like work hours and took on more and more responsibilities–single-handedly monitoring, managing, and executing up to five pursuits at once. Because I wanted to do well in my first job, I sold myself out to every social injustice I stood against.

As a feminist and advocate, I never stood for micro-aggressions directed toward my race, gender, nor class. But here I was, submitting myself to the injustices I stand against for the oh so alluring promise of ‘experience’. The risk of jeopardizing a good reference left me vulnerable, trying to justify why I should put up with it. In reality, I was being exploited and objectified. For every comment I walked away from, for every touch of his I tried to ignore, I was losing to everything I once encouraged others to fight against.

Sexual harassment rears its ugly head in many flavors. It doesn’t matter what his intentions were, it was the fact that his verbal and physical actions created a hostile and offensive working environment, and that his power silenced me. I don’t chalk it up to just one isolated case, but the societal unawareness and lack of dialogue around this success barrier faced most prominently by young professional women and furthermore, the culture of silence we enable. In a recent survey by the Cosmopolitan, 1 in 3 women age 18 – 34 had experienced workplace sexual harassment. OVER 30 PERCENT. That number is astounding, but it unfortunately no longer surprises me.

When I handed over my resignation, I had no other job lined up. But facing the uncertainty of the future paled to facing the certainty of the degradation that I would have to endure if I stayed. I cannot be an advocate for others if I cannot be an advocate for myself. Quitting my job, while in the privileged position of doing so, was the act of self-advocacy. Sharing this story is the act of advocacy for others.

Yes, this money would have meant a lot to me and my family, but there has to be another way. Three months out of college and two months into my first professional job, I turned down a dream-raise to stand up for the fact that no dollar figure will ever be worth my value as a human-being and especially not my integrity as a woman.

This article written by Kim Ta on her work experience has sent a strong message to people and especially women out there. Let’s applaud for the courageous lady and bid her well in her future endeavours.

Have a courageous story to share? Tell us about you or your friend’s story/experience here. We’d love to hear about it, no matter how big or small the deed is! Plus you could stand a chance to win premium personalizable Adidas jerseys! Sumbit those stories to Allianz Facebook Page Post here now! We want them all 🙂 Spread the positivity!