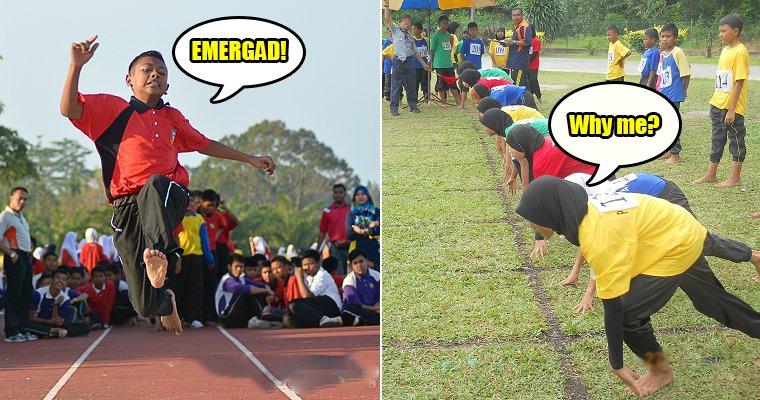 PE, or better known as Pendidikan Jasmani dan Pendidikan Kesihatan (PJPK), is a nightmare for everyone who isn’t athletically inclined. All those thoughts of running and doing the lompat tinggi are nearly as exhausting as actually doing them. If you feel like you relate to this on a spiritual level, here are nine other things you could probably relate to, especially if you hated PJPK in school!

1. Standing under the scorching sun

We know this all too well! Standing under that sweltering heat and wondering why we have to go through everything is a regular thing we experienced and pondered each week. 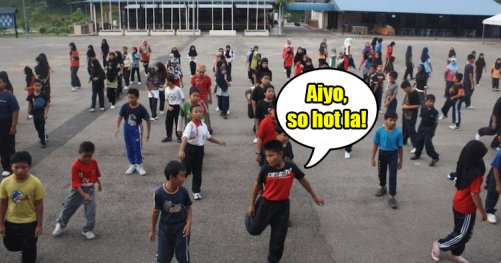 Also, we’ve definitely contemplated migrating to another country where the weather is much cooler. Ah, sweet memories!

2. Loosening your shoes before running

This goes out to all of y’all who can’t run. If you hate running, chances are you’ve done this before – purposely loosening your shoes so that either of them may ‘accidentally’ come off while you’re running. Sneaky.

Of course, if you’re lucky and this happens, it wouldn’t seem like it’s your fault, so you won’t have to make it to the finish line. We swear, it was all the shoes’ doing!

However, truth is, we don’t want to be the loser that comes in last because we are inept runners. Oh, the insecurities!

3. Being chosen to run because of your skinny physique

Some of us were really skinny back in school (fast metabolism ma!), but that doesn’t mean we CAN run. 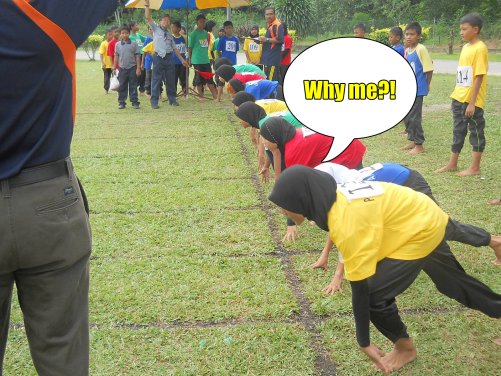 For the record, our physique has nothing to do with our ability to run. So, we’re sorry if you thought we were runners because, in all honesty, we are quite terrible at it.

4. Taking your BMI in front of everyone (including your crush)

If you’ve gone to a co-education school, taking your Body Mass Index (BMI) in front of everyone is probably the worst thing ever! This is because our BMI will most likely be taken in front of our crush (Oh God, why), so of course lah, we’ll feel malu! What if our BMI is too high or too low?!

5. Being forced to participate in activities

You’re already dreading the fact that you have to be present for PJPK, and now the teacher is forcing you to participate by playing a game.

Since you don’t have a choice, you oblige. However, you do it with zero enthusiasm and try to find a way to play an easy sport like passing the ball.

Now, we all know these two categories are the common enemy for those who aren’t athletic. Not everyone got long legs, okay?

No matter how many times we try to convince the teachers that we just cannot play the sport, they still make us try them out during sports practice. In the end, we just can’t escape embarrassing ourselves with all the failed attempts. *Sigh*

Consider us the master of creating excuses just to get out of PJPK class! The most common bunch of excuses? “Teacher, stomach pain lah” or “Teacher, headache lah”. Heck, sometimes even excuses like “Teacher, forgot to bring baju lah” gets accepted!

Of course, when our excuse is a success, our friends will just stare at us with envy as we sit on the grass or pavement not needing to do anything throughout the whole lesson. That’s one hour of free time we just earned!

After spending a lot of time under the sun, you can bet that the whole class is going to reek of sweat.

Also, since high school is when we underwent puberty and our biological changes were underway, the stench was definitely twice as bad. Sometimes, we’re stuck smelling that odour for the rest of the day!

9. Having to sit for the written exam

Let’s face it, none of us actually touched the textbook during our PJPK theory classes. When examinations arrive, we just hope to the heavens that we’d be given some sort of inspiration so we can at least pass the paper. Thankfully though, for some reason we always end up passing the exam with flying colours! 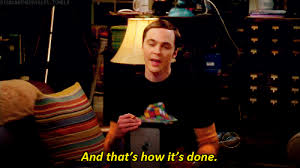 As much as we loathed this class, we all know that deep down, we still had fun during PJPK because it was the only time we actually got to freely mingle with our friends for an hour without the teacher bugging us to keep quiet. The love-hate relationship we had with PJPK will always remain our sweetest memory!

Also read: 8 Things All Malaysians Who Ever Had a Bantal Busuk Can Relate To 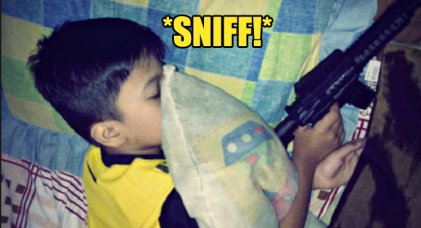