Growing up, going to school was always a struggle. We dread putting on our uniforms, and marching ourselves to class. However, instead of the usual paper after paper lessons, a young teacher in Sarawak is receiving tons of applause on social media after he decided to conduct his lesson in an interactive way which will allow students to learn wayyy more effectively.

Raee Yeoh did a creative twist to the normal test practices and decided to conducted a murder simulation for his English class.

“Murder mystery is always one of the lessons that never fails to keep the whole class engaged. In conjunction with the Form1 final exam at the end of the month – instead of the normal test paper drilling practice method – I decided to conduct murder simulation in 1 Lawas for my English class.” 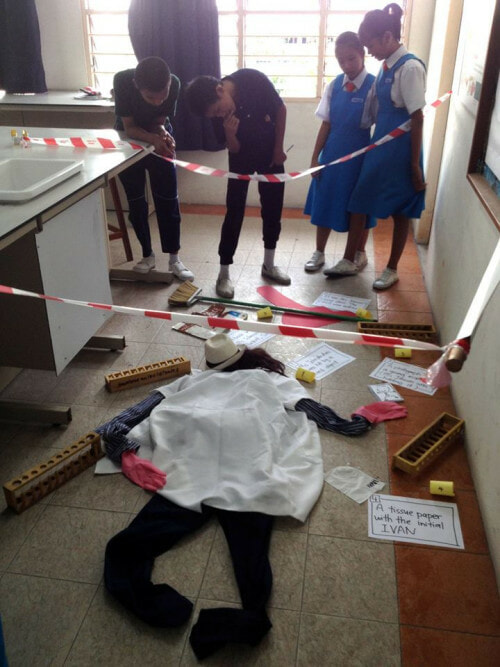 Before class started, Yeoh created a crime scene where a ‘victim’ named Ms McGowan was murdered. He made the ‘dummy victim’ out of a lab coat, wig, jeans and gloves, while placing clues and number tags around ‘the dead body so students could infer and deduce what had happened’. 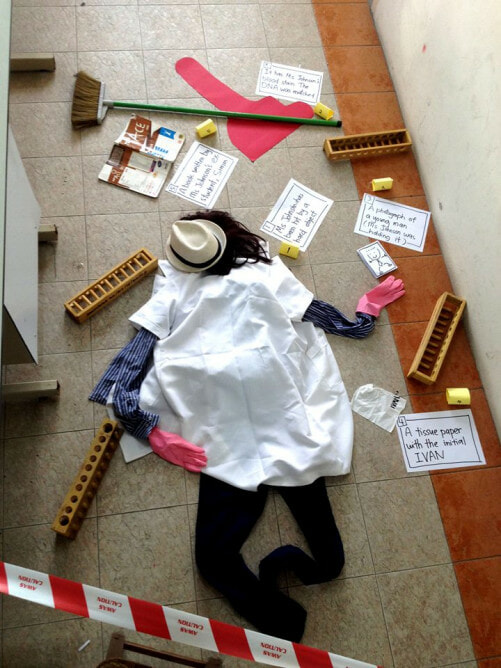 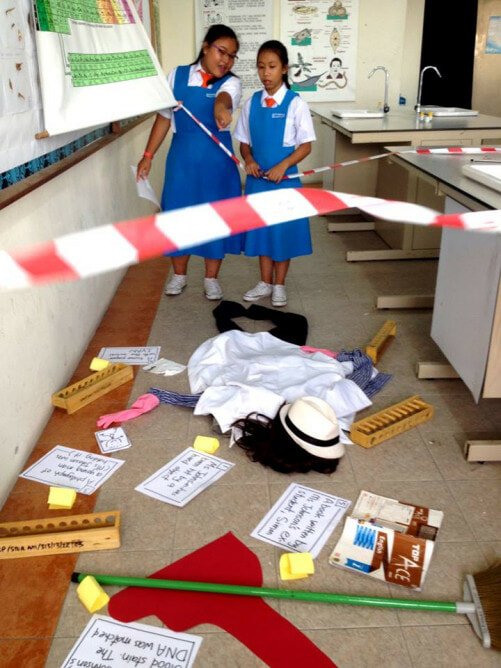 He then donned a long coat and role played as a head detective while the students were his new recruits! He made the rule of only being able to converse in English otherwise the ‘bad tempered head detective’ will be mad and punish his ‘new recruits’! How cute! 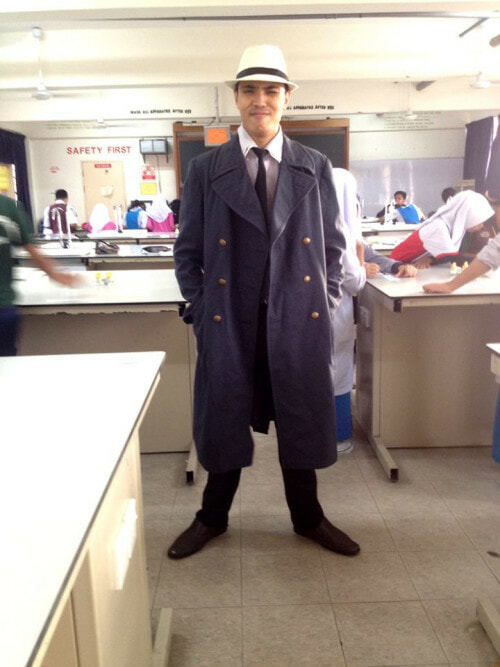 Yeoh mentioned that the students were very happy to ‘play’ in school instead of having to do their test practices. But Yeoh later confessed that the whole murder mystery was indeed the test practice itself!

“Little do they know, this seemingly cool detective skill during the lesson is actually the usual reading comprehension skill (it is called INFERENCE) that they have been practicing since their primary school; the only difference was I chopped a long reading text into 11 text excerpts and stick it around. They thought they only had fun today while they didn’t know the exercise for information transfer comes in many ways other than from the papers. *evil laugh*” 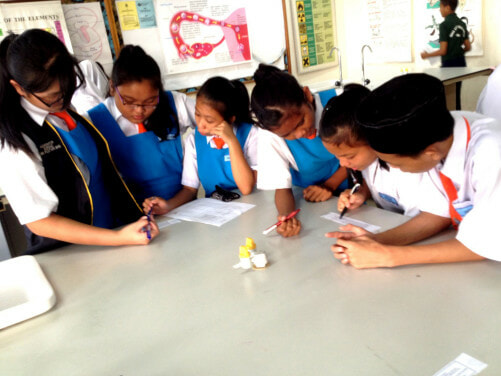 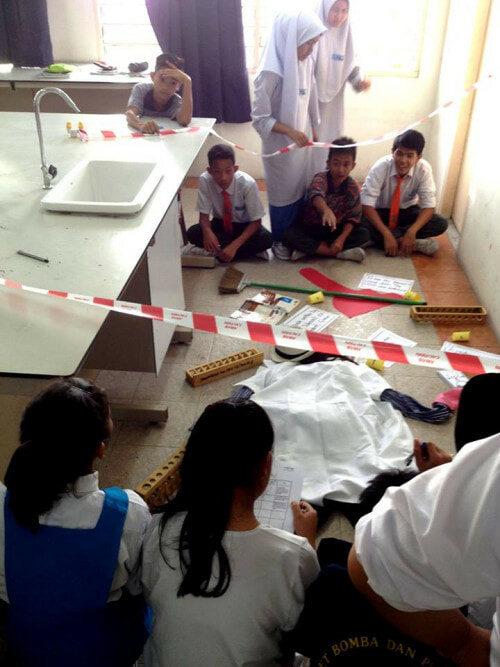 At the end of the murder mystery, Yeoh made a big knife prop for students to pose with as motivation for the students to finish their exercise. Knowing all too well about people from this generation, Yeoh says, “Oh trust me selfies and photographs are always the best reward for the students!”

Although it was a ton of fun, the preparation for the simulation exercise was very time consuming as it took Yeoh 2 hours to look for ideas in the internet while he took another 2 hours to make a big knife prop. That’s what I call dedication! Mad respect. 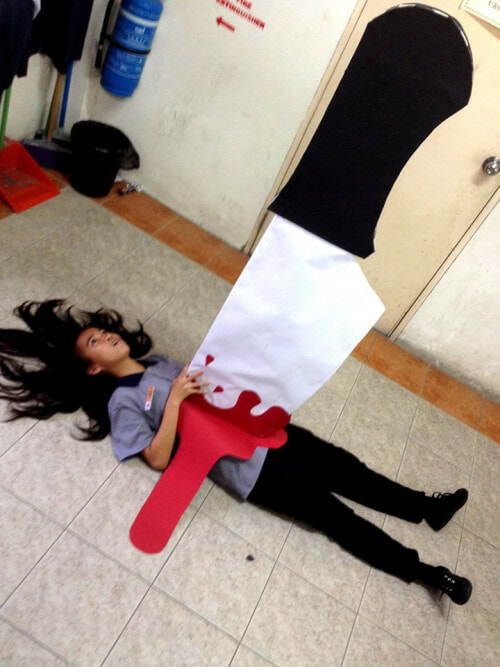 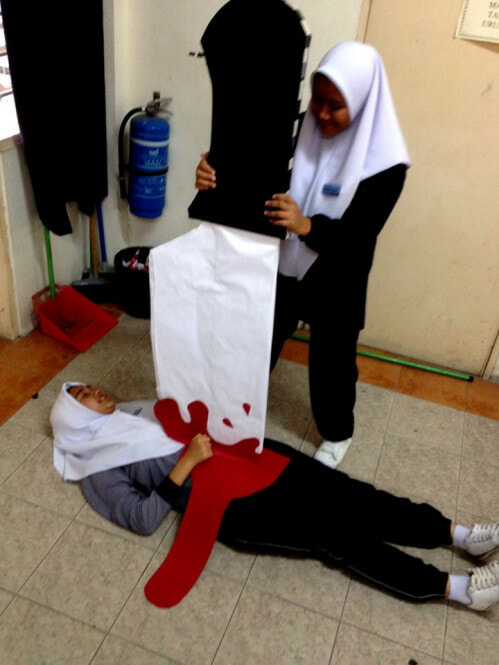 “These kind of lessons are always fun for both teacher and students. I could do this all day if time permits.”

Yeoh’s work got a lot of praise from Malaysians and it inspired other teachers to do the same.

Keep on doing what you do Yeoh!