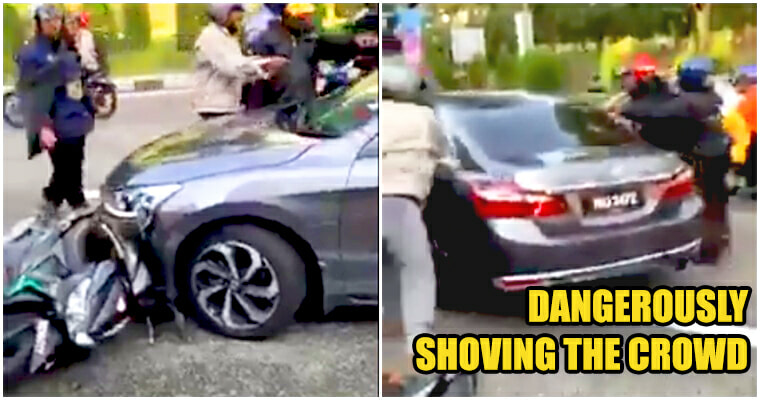 Get a load of this, yet another hit-and-run! Even in this day and age where everyone and anyone has a camera of some sort on hand, some drivers are still going out of their way to prove that they’re the worst people.

This time, a rude Honda driver hit a motorcyclist, which threw her off to the road, and if that wasn’t enough, he dangerously used his car to shove a crowd of angry passersby who attempted to confront him, and even ran over the bike, destroying it, just to escape. Attitude much?

Recently a Twitter user called nufaaa_ posted a video of a desperate Honda driver who crashed into her mother’s motorcycle at Jalan Kuching on Oct 10th.

“Allahu, how rude! Mama was thrown onto the street and her bike was completely demolished. Alhamdulillah, God protected Mama from the other passing cars. May Allah give you a worthy punishment for what you did, o reckless driver who doesn’t deserve to live in this world. I hope you will never live in peace.”

If you listen to the video, one of the motorcyclists was trying to talk the driver down by asking him to park on the side of the road so that the usual ritual of exchanging details could be made so reports can be filed, but obviously the driver had little intention of doing so.

In her thread, Nufaa said that she had just finished with an exam at school when she received a text message from a family member informing her, “Dik, Mama had an accident.”

“My knees trembled when I read this after the exam just now. It felt like the world had just turned dark for a moment,” said Nura in the thread.

She also mentioned that her mother was badly wounded, recounting that ” Her face and knee were injured and her elbow received few stitches.”

Aiding passersby tried to give chase after the driver drove off, but he managed to escape in the middle of dense traffic. However, Nufa assured netizens that a police report has been lodged and the police are working on it.

When asked if the driver’s ethnicity was Chinese, Nufa said that the driver was African.

She also thanked the passersby, who were very helpful and helped them to sort everything out smoothly. Her 27-second video has since been retweeted 17.9k times, and of course, the public was enraged!

“Why didn’t any of the bros just throw their helmets at his windshield? Ee.. I am so mad. Best to just trample him to death.”

“So you want to show off with your fancy car but you refuse to be responsible when you crash onto someone?”

“Pergh, if it was me, I’d break his windsheild and drag him out of there…”

Isn’t it better to just admit your mistakes instead of running away and causing more trouble? What do you think? Obviously this person should without a doubt be captured immediately.

Also read: Watch: Reckless M’sian Driver Causes Not Just One, But TWO Accidents Due To Speeding 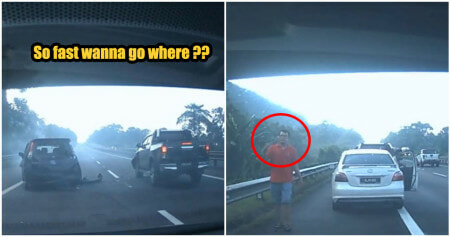