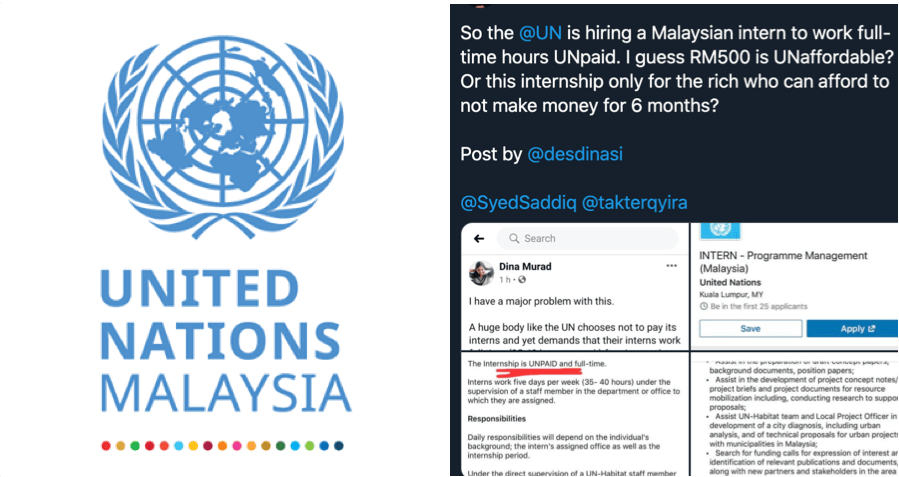 Although logically, we would expect organizations who hire interns to pay some allowance to them, there are still companies out there that provide free internship while expecting their interns to work full time. 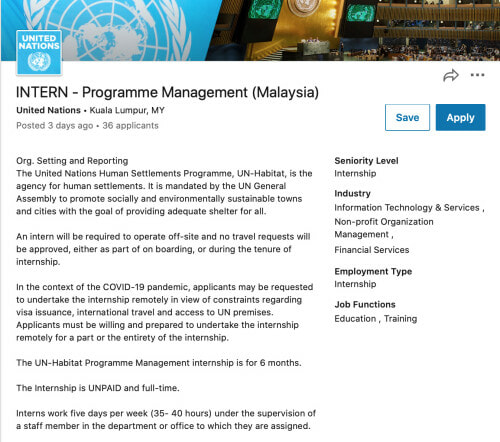 One organization that came under fire recently was the United Nations (UN) after they posted a job listing on their official LinkedIn page. It is clearly stated in the listing that they are looking for a Malaysian to be under the UN-Habitat Programme Management Internship for six months. It is a full-time unpaid internship and interns are required to operate off-site.

This listing had prompted anger among citizens. Dina Murad, a journalist from The Star took to Facebook to voice out her opinions in regards to this matter. She wrote,

“A huge body like the UN chooses not to pay its interns and yet demands that their interns work full time (35-40 hours a week) for six months. The biggest group impacted by urban policies are the urban poor. But to get the opportunity to work on these policies with the UN, candidates need to be from a rich enough family that can support them during their UNPAID internship.”

The unpaid UN internship drama is nothing new. Back in 2015, as reported by The Guardian, an unpaid intern for the UN had to sleep in a tent because the cost of living in Geneva is too high. The intern, David Hyde, flew all the way from New Zealand to take up the internship but had to resign after his picture living in a tent went viral.

Syed Saddiq also chimed in on the matter. He argued that UN is an organization that should set a positive standard for all. He tweeted,

Isn't UN supposed to set the international standards for all?

I hope they reconsider.

At the moment, there’s is still no official statement from the UN in regards to the matter. Should it be made compulsory for all organization to pay their interns?  We want to know your opinion on this. 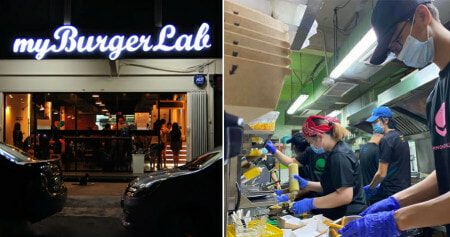