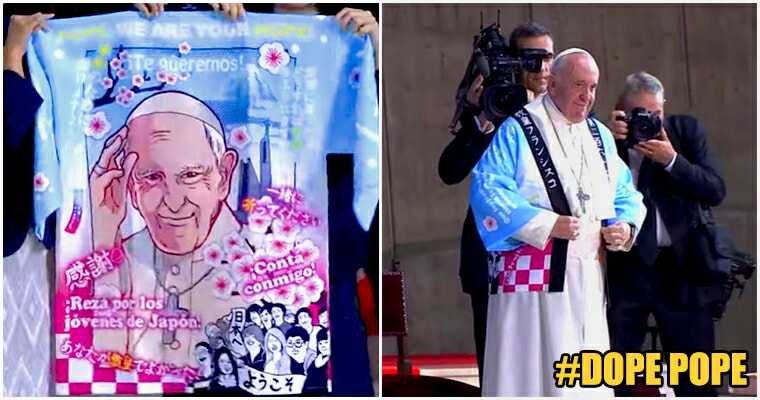 According to Mainichi, it has been 38 years since a pontiff had visited Nagasaki and Hiroshima, making Pope Francis the First after nearly four decades.

This is his second visit to Japan and this time he stayed for four days, starting Saturday, Nov 23rd.

Known for always taking a less formal approach to the papacy, he gladly wore a ‘Happi‘ (a type of traditional Japanese straight-sleeved coat) that was gifted to him on Monday, Nov 25th. 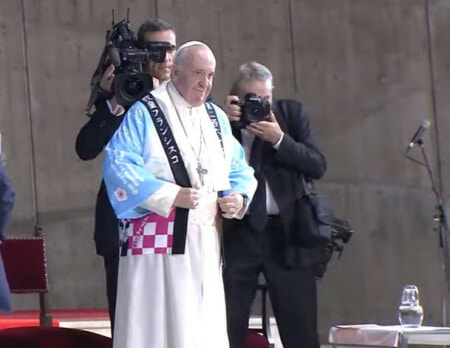 The garment was presented during his visit to the Cathedral of Holy Mary in Tokyo for a dialogue with the youth.

The coat was designed with a combination of sky blue, white and pink ombre base and glorified with an illustration of the pope, the welcoming participants, along with flecks of sakura (cherry blossom) – symbolizing the readiness of the pope and Japan to come together. 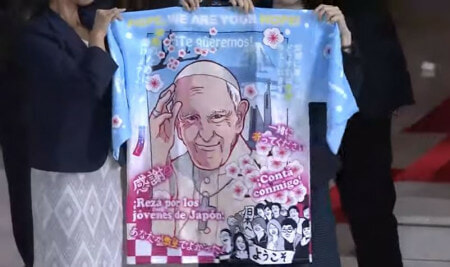 To make the ‘happi’ a lot more meaningful, words in different languages such as English, Japanese and Spanish were also imprinted as part of the design.

Among the Japanese phrases that are written can be translated to “gratitude”, “let’s pray together”, “may there be peace”, “what can be done to give disaster victims hope” and “we are glad that you are the pope”. 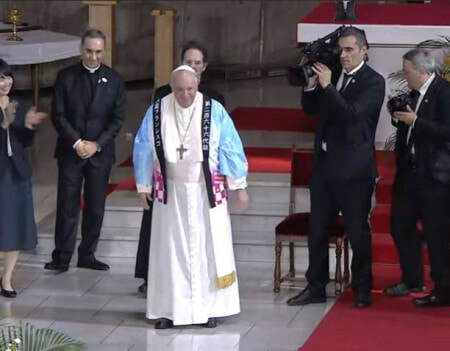 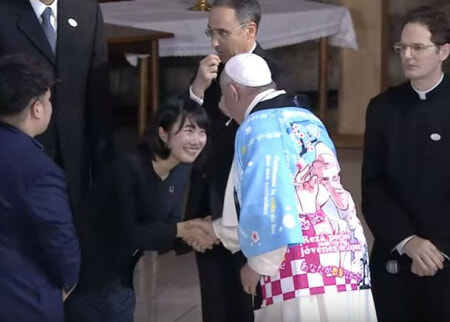 The pope has also been praised by many and known for his anti-nuclear weapons advocacy. This is why the 82-year-old Argentine pontiff made the visit to two of the only cities in the world that have suffered from a nuclear attack.

The bombing caused millions to suffer, and after sensing the possibility of a new nuclear arms race, Pope Francis has urged major powers to disarm their nuclear weapons.

The rest of his dialogue at the event can be watched at this YouTube channel called Pope In Japan 2019.

The cartoon version of him is cute though, maybe he could be next mascot for the 2020 Olympics?

Also read: This Japanese Hotel Lets You Stay For RM5 a Night, But Will LIVESTREAM Your Every Move 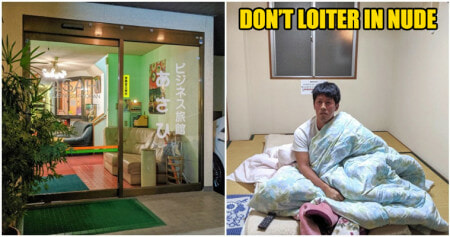