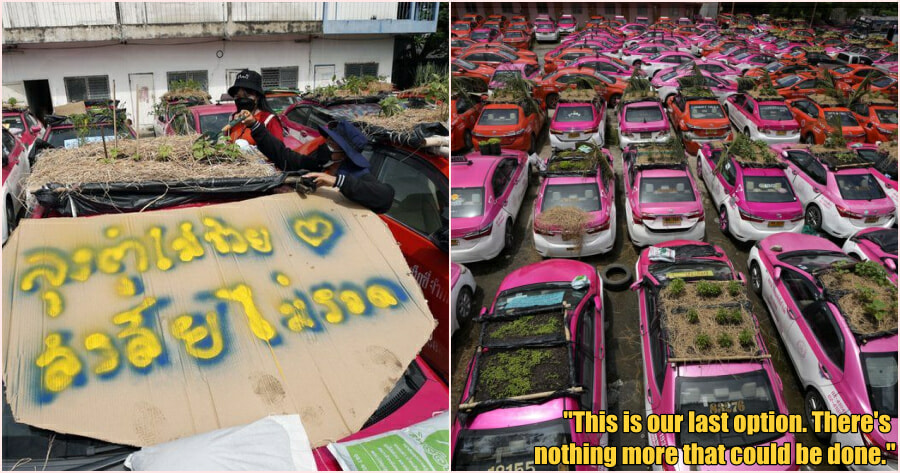 “The vegetable garden is both an act of protest and a way to feed my staff during this tough time.”

Thailand is currently facing a surge of Covid-19 infections which have ranged from just under 15,000 cases in recent days. As of today, the country has confirmed over 1.4 million cases and has over 15,000 deaths.

The country’s tough Covid-19 restrictions have left the once hectic and busy streets of Bangkok empty and quiet and have consequently put taxi drivers out of work and resulted in many drivers leaving the city for their home villages and leaving their taxis behind.

Now as both a form of protest, as well as to feed out-of-work drivers and other employees, the BBC reported that two taxi cooperatives have assembled miniature gardens on top of idled taxis by using black plastic garbage bags stretched across bamboo frames. They then added soil in which crops such as tomatoes, cucumbers and string beans, were planted. 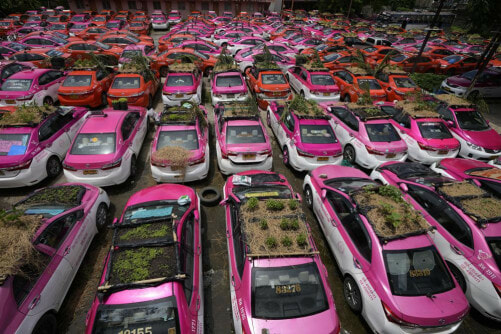 In a car park in Bangkok, the Ratchapruk and Bovorn Taxi cooperatives compiled some of the idled cars for the project. According to executive Thapakorn Assawalertkul, “There are 500 cars left plying Bangkok’s streets, with 2,500 sitting idle at a number of city sites.”

Thapakorn mentioned that many drivers could not afford the daily payments for the vehicles and have walked away and left the cars in long silent rows.

“Some drivers surrendered their cars and returned to their homes in rural areas when the pandemic first hit last year because they were so scared. More gave up and returned their cars during the second wave. Some left their cars at places like gas stations and called us to pick the cars up.”

The result looks more like an eye-grabbing art installation instead of a car park that aims to draw attention to the plight of taxi drivers and operators who have been badly hit by coronavirus lockdown measures as well as the urgency to feed out-of-work drivers and other employees. 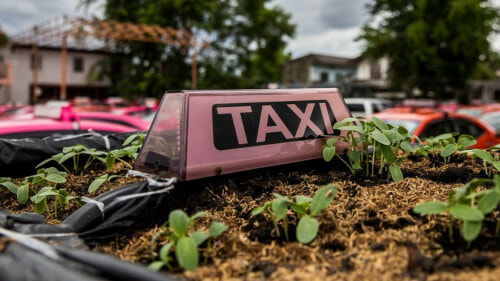 The situation has left the taxi companies in financial peril, as they have been struggling to repay loans on the purchase of their fleets. According to Thapakorn, the Ratchapruk and Bovorn cooperatives owe around 2 billion baht ($60.8 million) and the government has not offered any direct financial support as of now.

“This is our last option. Growing vegetables on top of the roofs won’t damage the taxis since most of them have already been damaged beyond repair. The engines are broken, tyres are flat. There’s nothing more that could be done.”

Let’s hope that the situation does not get that dire here and lead to our local taxi drivers resorting to such ways in order to feed themselves and their families.

Also read: Japan Will Reuse Its Olympic Cardboard Beds For The Use Of Covid-19 Facilities In The Country 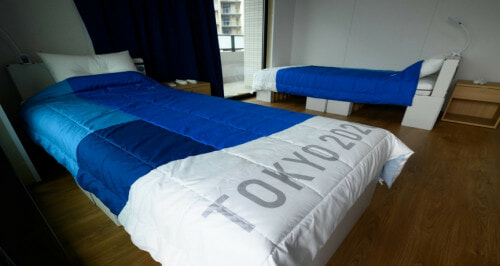