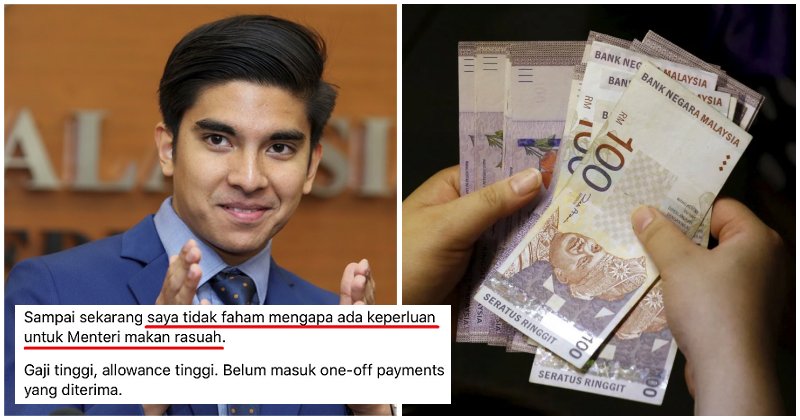 Former Youth and Sports Minister, Syed Saddiq, decided to take to his Twitter to clarify his stance after being under fire for corruption allegations that surfaced in March. 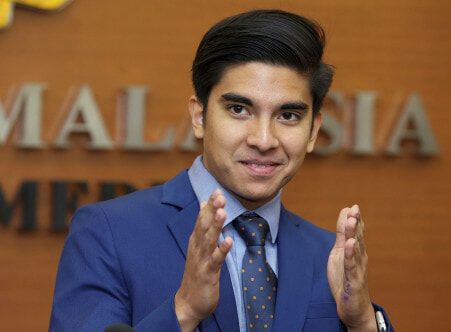 After a whooping RM250,000 reportedly went missing from his home, many began accusing the Muar MP for taking bribe money belonging to PPBM. Despite denying this claim multiple times, the ex-minister decided to clear the air once and for all by stating his case on social media.

But netizens weren’t nearly as shocked about Saddiq’s case as much as they were surprised by the bombshell revelation of how much Malaysian minister’s make on a monthly basis.

Ministers and parliament members earn a whopping RM55,000 a month

Saddiq started off by saying that he didn’t understand why ministers would even accept bribes when they already receive such a hefty income.

“Till today, I don’t understand why minister need to take bribes. [Ministers] receive high salary high allowance. And this isn’t even including all the one-off payments received.”

The ex-minister then disclosed that they earn RM55,000 from just being a minister and parliament member.

“This doesn’t include when ministers have to travel some distance away from the office to attend a programme. Additional incentive is given for those too,” added Saddiq.

Here’s the full extent of allowances that ministers are supposedly entitled to:

If you’re confused as to what pinggan mangkuk purchases actually mean, yes they are referring to CUTLERY. And if we calculate these full claims, it’s up to RM187,700 a year!!

Syed Saddiq reveals that he never claimed for anything extra

Due to the allegations, Syed Saddiq blatantly laid all evidences out saying:

He ended the post saying, “Berani kerana benar”, which translates to “Brave because it’s the truth”.

If you’re outraged, don’t worry-so is the rest of the internet.

Something’s incredibly off with Malaysia’s economic distribution when a minister’s elaun pinggan mangkuk is worth ~3 years of a minimum wage work’s salaries.

And their annual vacation allowance?

Can pay the monthly salaries for about 18 fresh doctors. https://t.co/9jV3lkD7LV

The government thinks it's more for our members of parliament to eat and entertain in style than hiring researchers to do legislative work.

But it doesn’t stop there. Even if you’re no longer a minister and have been terminated from your post, you’ll still receive a one-off payment amounting to a total of RM150,000!

Since the posting went viral on Facebook with over a thousand shares since yesterday (12th May), netizens have come forward to commend Saddiq for being honest and transparent with the public about his earnings.

People say YB Syed Saddiq is too young to be MP.

They are dead wrong. He is not young but genuine. He is far better than those crooked MPs/politicians. https://t.co/9U7hcvKodT

I really hope you maintain your convictions & idealism, @SyedSaddiq , throughout your entire life. People change & I hope you don’t, except for the better. Because the young generation need role models like you to look up to. In politics there are not many

Others expressed their disappointment in the disparity of earnings between ministers and the people:

What do you guys think about this? Let us know in the comments!