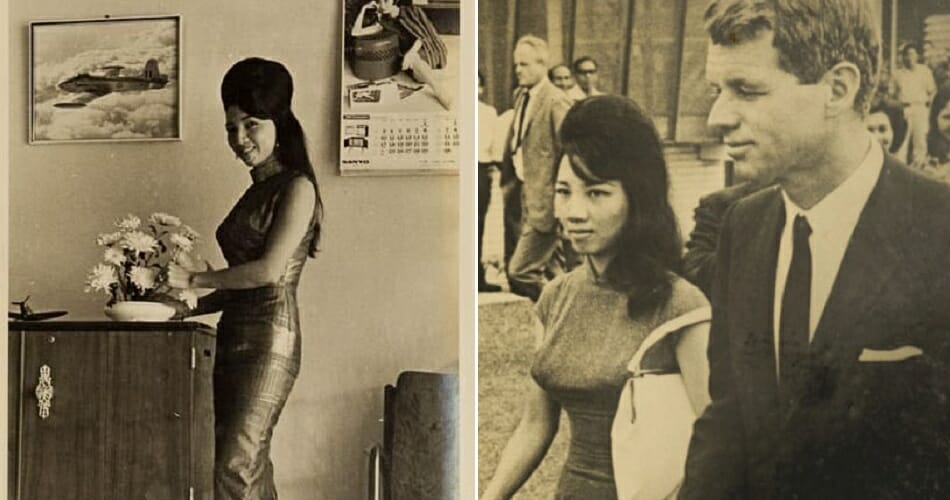 Forget Bond girls! Here’s a story of an actual woman spy who kicked ass while looking fly in a cheongsam.

Blossom Wong caught Malaysians’ attention when an old photograph of her donning a sultry cheongsam while escorting the 64th Attorney General of USA Robert F. Kennedy and his wife, Ethel, emerged from the internet.

Fun fact: She had also escorted other famous politicians like Madam Park, wife of S. Korean president Park Chung-hee; Japanese prime minister, Eisaku Sato and his wife; and the governor-general of New Zealand. 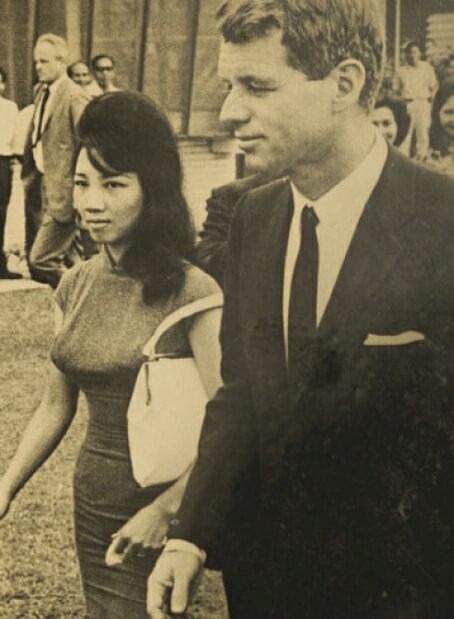 However, one shouldn’t overlook her sultriness because Blossom Wong is actually a bonafide police officer who has had an impressive track record while she was serving in the force. Since she is so bad ass, we have decided to shine some light on Blossom Wong’s background and her work in the Malaysian police force, so we can appreciate the #bosslady a little better.

Without further ado, here are six things you should know about real-life spy, Blossom Wong.

Born as Wong Kooi Fong, Blossom was a name given to her by a Caucasian district officer’s wife who lived near her house in Sungai Besi, Kuala Lumpur.

“I have always loved plants and gardening. When I was a child living in Sungai Besi, Kuala Lumpur, I used to plant flowers.”

“There was a Caucasian district officer who lived near my house. His wife called me ‘Blossom’ because I loved flowers and everything I planted grew well,” she said, noting that she used chicken droppings from chickens reared by her father as fertilisers. 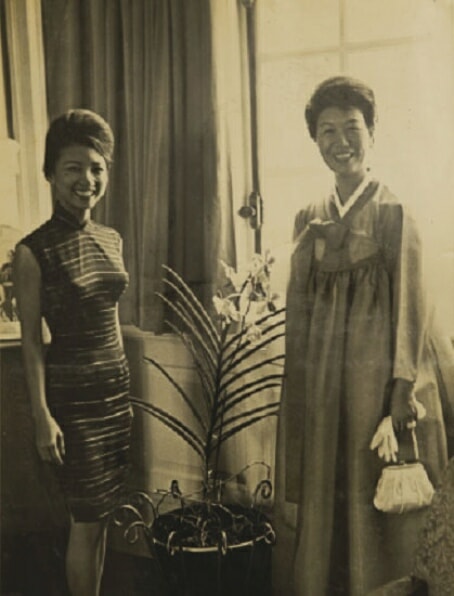 Since then, the nickname ‘Blossom’ stuck throughout her career as a police officer and eventually, it became her official name.

2. She took the road less travelled

After completing her Senior Cambridge exam in the 1950s, Blossom was confused with her path of life because back in the day, there were only two career options for women: to be a teacher or secretary. However, Blossom had no interest at all in both career paths. 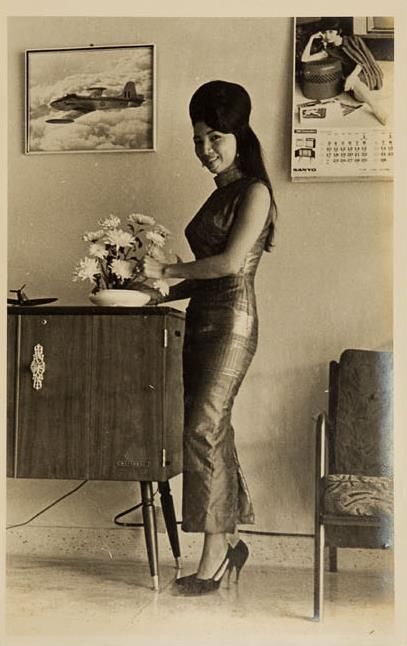 “Both were not my cup of tea. I was a tomboy in school; I played hockey and badminton. I was involved in debating and geographical societies.”

“To me, teaching is boring and to become a secretary, well you have to please your boss. Plus, you cannot go out of the office and I’m an outdoor person,” Blossom explained.

Nonetheless, her confusion wasn’t for long because she had an epiphany when she found a recruitment advertisement for the police force. She thought to herself that signing up for it doesn’t seem like a bad idea, especially since they wanted people who are active and sporty like her.

So, she applied for the police training secretly without the knowledge of her father, who wanted her to pursue a teaching profession. 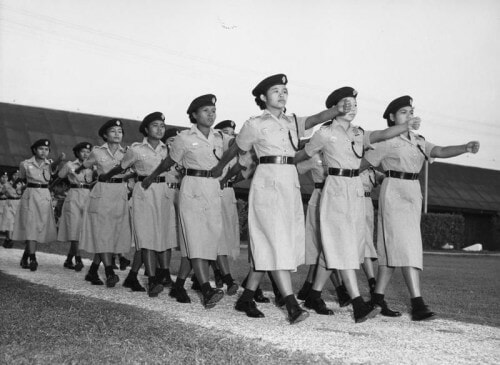 “I applied quietly without telling my father, who wanted me to be a teacher. I’d rather not because I was quite naughty in school and I was afraid of getting balasan (retribution) from my students for all my misdeeds in school.”

Blossom was even more sure of her decision when she saw a lady police officer looking smart in her uniform while inside a patrol car in the town area (which is now Pavillion shopping mall by the way). 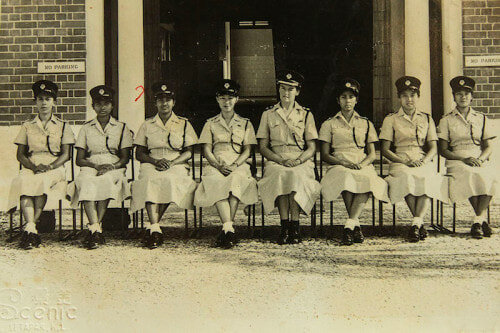 Besides that, another reason Blossom wanted to pursue a career in the police force is that she would get to ronda around KL in a police car every day.

3. She officially joined the police force in August 1957

On 1 August 1957, Blossom received a letter requesting her to report for six months of basic training. Yay, she got in!

The whole process was exciting for her as she learnt interesting things like marching, musketry and the law. However, training for the police force wasn’t a walk in the park because she had to brave the hot sun as she marched in boots three times a week. 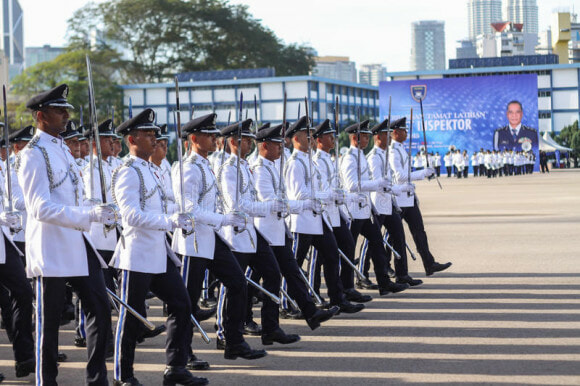 Not only that, her Bahasa Melayu (BM) wasn’t really good at that time, so she had difficulties understanding orders that were given out in BM.

Blossom’s training at the police camp was definitely intense because all 15 men and women, including her, had to wake up before 6am every day to march before they began their training. Finally, at the end of her training camp, Blossom was chosen to join the Special Branch and was positioned in Penang.

Blossom must have excelled in her training because she managed to get a spot in the Special Branch.

4. She had to sacrifice her social life after becoming an undercover agent

As cool as the thought of becoming an undercover agent may sound, the job isn’t all rainbows and ponies. Blossom had to sacrifice her social life because as a secret agent, she can’t mingle with other uniformed girls as it can give her position away.

“I would travel incognito all over Penang as a decoy or as an undercover. Working with the Special Branch took a toll on my social life. I was very unhappy socially,” shared Blossom after stating that she didn’t even wear a uniform like she thought she would.

Despite having to sacrifice her social life, she still found her career very interesting.

Fast forward to four years later, she was then granted a transfer to Ipoh and became an assistant area inspector with five police stations under her. In 1962, she got married and was transferred to her hometown, KL, where she became a prosecuting officer in the magistrate and juvenile courts.

5. Mama-sans were terrified of her whenever she came to conduct raids

In 1966, the Officer in Charge of Police District (OCPD), Albert Mah told Blossom that the force had set up an anti-vice unit and she was a part of it.

“Your fellow officers will show you the black cats,” said Albert Mah to Blossom, which left her bewildered.

When they arrived at Jalan Ampang (somewhere near Federal Bakery), she noticed that several rooms were situated right on top of a Chinese Kopitiam. Hence, she and one of the guys who were also undercover, went up to survey the rooms.

“Some of the girls were sitting on beds. I used this visit to plan my operation. It was the first anti-vice operation and we caught a van full of girls. Some of them were underaged and one of them was pregnant.”

She added that sex workers back then were all local women and not foreigners. Following the first raid in Jalan Ampang, her team extended the operation to Jalan Walter Grenier, Jalan Khoo Teik Ee, Jalan Hicks, Jalan Alor and many more. Blossom joked that all the mama-sans were terrified at the sight of her. You go, girl!

FYI, mama-san is a woman in authority, especially in places like a bar, a nightclub or a geisha house.

6. She headed a rape investigation section that pioneered in using DNA as evidence

“We received training and a kit from the Royal Canadian Mounted Police. We pioneered the use of DNA as evidence.”

OMG, they were the first to use DNA as evidence!

After spending 36.5 impressive years in the police force, Blossom finally retired in 1993. Currently, she spends her time with her daughter who is a veterinary and helps her out with her practice.

She then said that she would occasionally do some gardening because she still possessed the green hands. As for her police career, she is forever grateful and would do it all over again in a heartbeat.

“I never regretted it. If I could do it all again, I would,” she said. 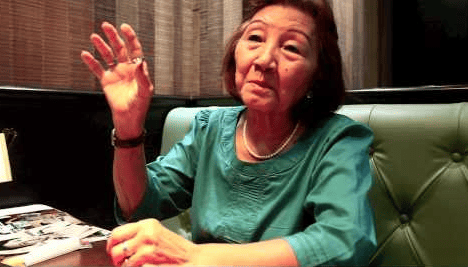 Blossom Wong is definitely an inspiration to every Malaysian woman! She will go down history as a formidable woman who defied all odds and paved a path of her own. Hopefully, all of us will learn a thing or two from Blossom’s story so we can follow in her footsteps and inspire others too.

To Blossom Wong: thank you for your service, Puan! 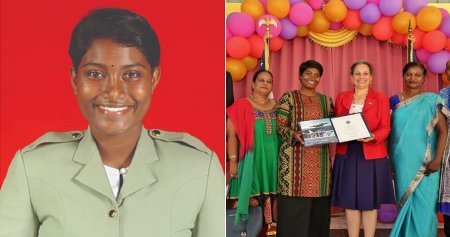