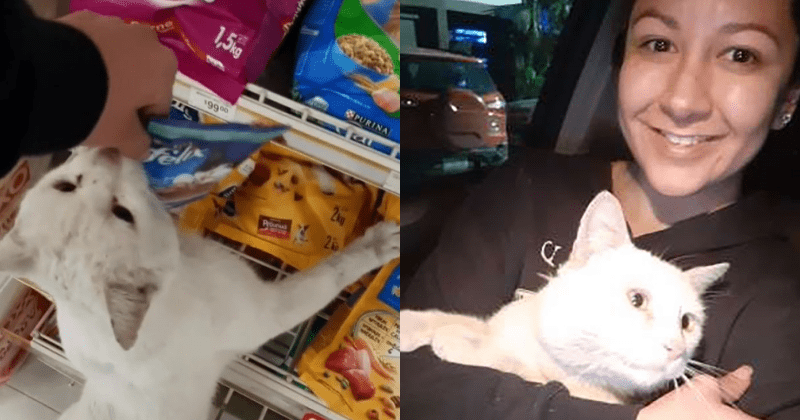 Millions of years of evolution, tens of thousands in the company of humans have instilled cats with particular traits and mental skills to survive.

To prove just how smart cats are, Tania Lizbeth Santos Coy Tova shared the story of her recently adopted cat Conejo and how he managed to get her to buy him cat food from a convenience store.

Sharing the story of Conejo via Instagram, here is an idea of what Conejo did to win Tania’s heart and eventually found himself a new home.

According to Bored Panda, Tania spotted a little stray cat outside her local supermarket in Piedras Negras, Mexico.

After much-needed mandatory pats on the head and gentle strokes, the cat led Tania into the store and paw-points the food he wants Tania to get him.

Without realizing what he had done, the stray not only got himself food to eat but also gained a new home and a new best friend in return.

Charmed by the stray, he was given the name ‘Canejo’ which means rabbit because he has no tail.

However, Conejo’s transition from life on the streets to a stay at home cat was not easy – probably due to the fact that he has never known a home all his life.

“We had to first heal the many wounds he had. We do not know if it was due to mistreatment by people or simply because he was in fights with other street animals.”

“He allowed himself to be touched and carried, but his countenance was very sad and fearful all the time, even before he came to our house.”

However, it is good to report that Conejo is now a very happy cat and no longer needs to wander the streets for food.

These kinds of stories just warm your heart, doesn’t it? Let’s hope that more out there will be inspired to take strays off the streets by giving it a home it deserves.

Also read: This Catto Is Keeping The Abang Askar Company And We Can’t Handle The Cuteness