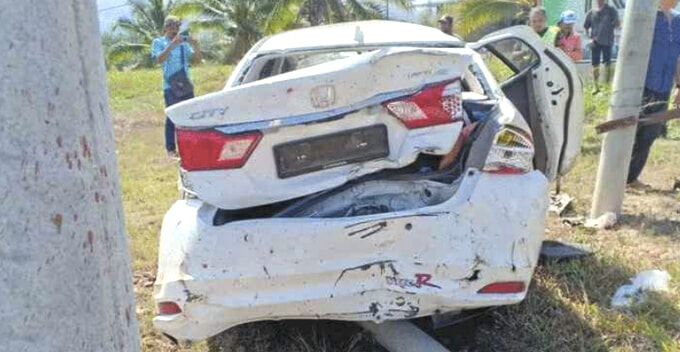 On Sunday (24 March), an 18-year-old student was flung out of a car after being involved in a tragic accident. It was reported that the student had lost control of the vehicle. This incident happened at 2.10pm in Tawau, Sabah.

According to Sinchew, the victim was a vocational college student and he was driving his 27-year-old teacher’s Honda City. It was understood that the duo was driving from Tawau to Lahad Datu at the time. Tawau district police chief confirmed the incident and revealed that the student wasn’t wearing his seat belt and had no driving license.

During the time of the incident, the Honda City was believed to have hit a divider on the road and spun out of control before plunging into a drain on the left. However, the car kept going and was heading towards a slope when the student got flung out of the vehicle.

The victim hit an electric pole and fell into the drain. Sadly, the driver was pronounced dead at the scene and the car was totalled. The female teacher who was wearing her seat belt was traumatised but didn’t suffer from any physical injuries. 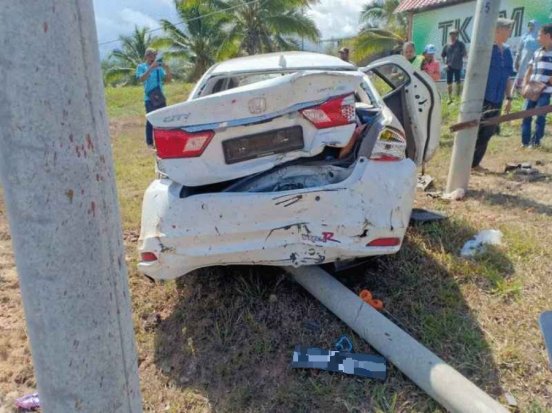 She told the police that the driver wasn’t drunk but that his seat belt wasn’t fastened when the accident happened. The victim’s blood sample has been taken by the cops for examination for alcohol and the case is now being investigated under Section 41 of the Road Transport Act.

RIP. 🙁 This heartbreaking incident could’ve been avoided if the student was wearing his seat belt, so remember to buckle up, guys!