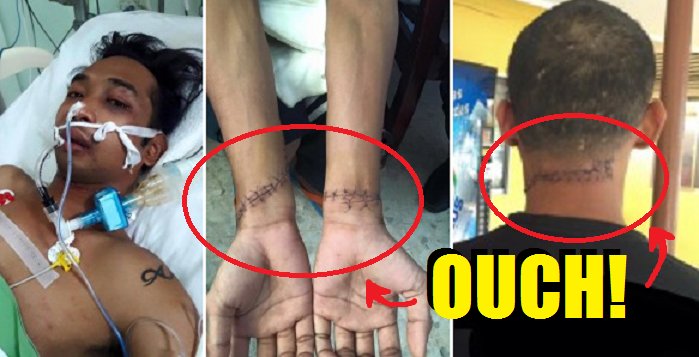 A rape suspect woke up on May 26 at the high dependancy ward of Tuanku Ja’afar Hospital to find he a deep gash on his wrist – deep enough to undergo a 9 hour surgery and require 50 stitches.

The 25 year-old Muhammad Izzatuddin Mardzuki, was arrested after a 13 year-old girl lodged a report stating she had been raped by him. The report was lodged on April 13. 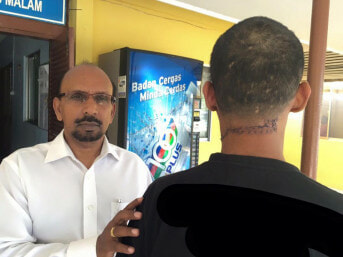 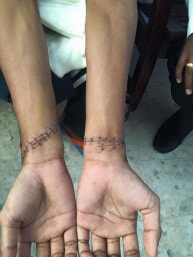 Now this is where the story gets complicated.

Nilai police claim the suspect cut himself with a blade while on the way to court from the Nilai police station. The suspect however claims that he wasn’t conscious at that given time. He gives an entirely different scenario instead.

Izzatuddin lodged a police report on June 2. His statement claims that a group of men claiming to be from the Home Ministry attempted to enter his family’s warehouse, then going on to assault him at 3am on May 25.

“I was kicked with a boot, my head was slapped onto the table, then on the floor. I was beaten on the stomach and back.” , he said.

“Then a man took his gun, pointed it at my chest and said he will shoot me and give me drugs.”

“They slapped and hit my head and body until I fell on the floor, and then I was ordered to stand up and I was beaten until I fell again.”

His police report goes on to state that the four men in plainclothes took RM100 lying on his table as well all emptying his wallet of around RM180.

According to Izzatuddin, a Proton Waja police car subsequently arrived and he was taken in by two uniformed policemen to the Nilai police station. There, Izzatuddin was questioned about an Indonesian worker, which the men previously accused of having fake documentation. He was then shown a picture of a girl and asked if he knew her.

“I said I didn’t know her. Then I was beaten again.”

“One of the men repeatedly warned me not to tell people that the police beat me up, but to say that I had tried to run away from the police and fell into a drain.”

“I was also asked to jump ten times while saying the word ‘bro’ because I had called them ‘bro’.”

“After jumping, one of the men took a baseball stick and hit my back. I was then asked to jump again.”

In his police report, He further states that he lost consciousness after being assaulted, only to regain his consciousness on May 26. He woke up surrounded by family members in a hospital ward.

“I was told that I was brought by ambulance to the hospital and had undergone surgery for nine hours from 2pm to 11pm.”

“The suspect is lying that he had no knowledge how he had sustained the life-threatening cuts to his neck and wrists.”

“We have ample evidence to show that he had cut himself up with the blade which he had in a sling bag.”

“One of the cops accompanying the suspect had to stop the accused from further injuring himself.”

“The policemen, who was seated at the rear end of the black maria entered the enclosure where the suspect sat, and stopped the accused from further injuring himself.”

“By then, the accused had lost a lot of blood and was straightaway rushed to the hospital.”

DCP Jaafar also denied the suspect’s claim that those who arrested him were from the Home Ministry:

“They were from the Nilai station and were acting on a report lodged by the girl.”

“Apart from the alleged rape, the police are now investigating the suspect under Section 309 of the Penal Code for attempted suicide.”

Manoharan, Izzatuddin’s lawyer, has highlighted the issue on his facebook page, demanding answers from the police.

The only thing that remains clear is that there are two very different stories and lots of unanswered questions. The drama hasn’t ended just yet. Stay tuned for the next episode.