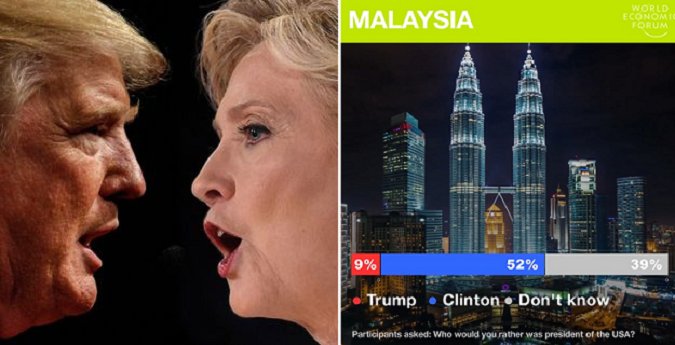 The world was in shock after Trump won the elections yesterday. But how would other countries have voted?

Recently the World Economic Forum posted a Facebook video showing the results of a global survey to find out how people in other nations would have voted in the 2016 US Elections.

The survey was a YouGov poll from October 2016. The participants were asked,

“Who would you rather have as the President of the USA?” 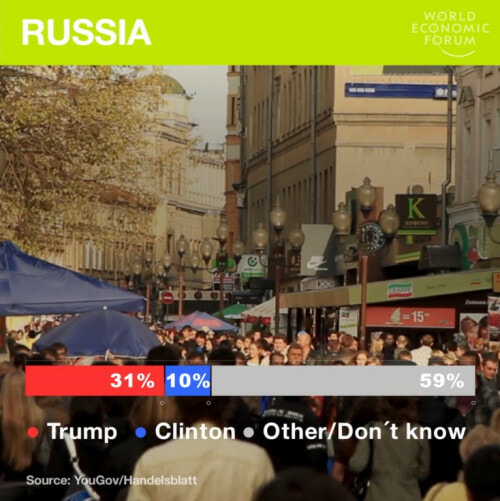 Rather unsurprisingly, Trump leads Clinton in Russia, his populous policies which include stricter immigration laws and his brutish and frank nature works well in Russia where traditional masculinity is looked up on.

Russians who remember Hillary’s husband’s time in the Oval Office also would be against having another Clinton as a US President. 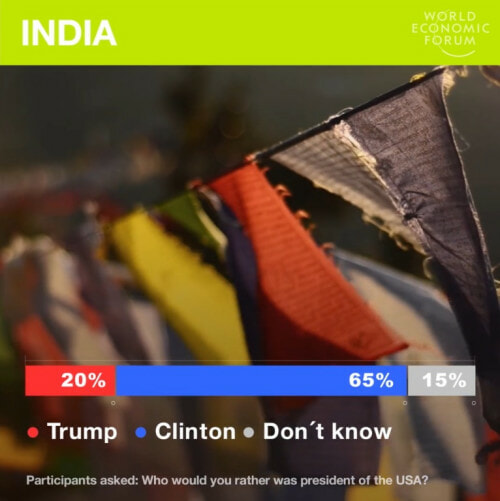 A very strong majority here support Hillary Clinton, who is for a more open boarders with other countries, such a policy would be great for Indian nationals looking to emigrate or pursue an overseas education in the USA.

That would explain her popularity in India. 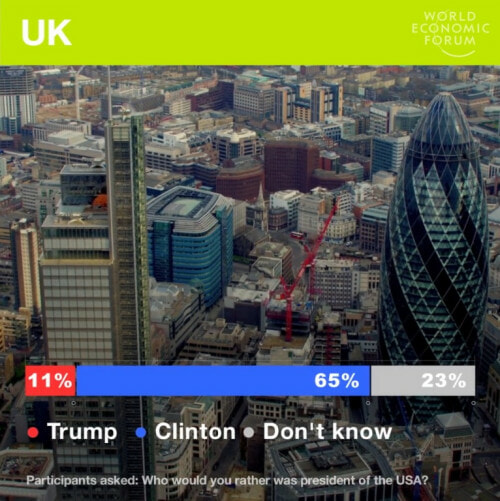 The nation that is relieved that they are not 2016’s only fuck-up, the UK has been under a lot of international scrutiny after a public referendum on whether the UK should remain in the EU.

The UK also have been very hostile to Trump’s remarks much like India. That added to the mainstream media’s pandering of Hillary set the public perception that Clinton is the better candidate. 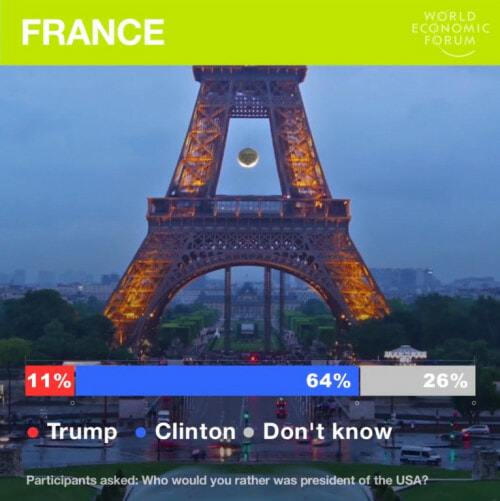 In France, it’s much of the same here. Trump is not very favorable, which is understandable knowing that France just elected a socialistic government, which means they’re much more left-winged than Trump’s target demographic.

However, some French people are getting more and more nationalistic, and want tighter immigration laws after looking at Sweden’s large influx of Muslim migrants which led to  it being crowned the “rape capital of Europe”.

This could mean that in the next few years, Trump’s ratings may actually improve, surprisingly enough! 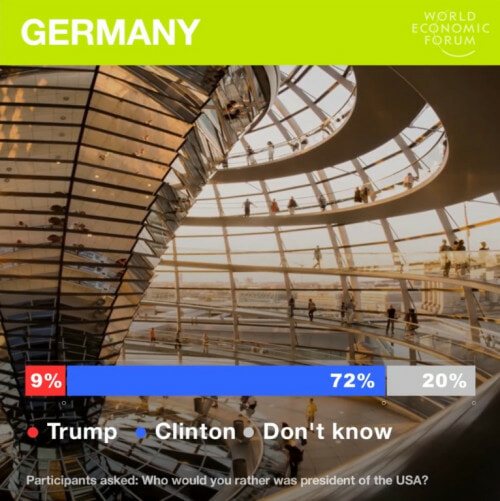 Germany is rather well known for it’s intolerance on anything that could be considered “sexist/racist/misogynistic”. Unfortunately that is very much how Trump is looked at over there.

The Clintons on the other hand are quite loved, but most of them were rooting for Bernie Sanders to win the Democratic nomination. 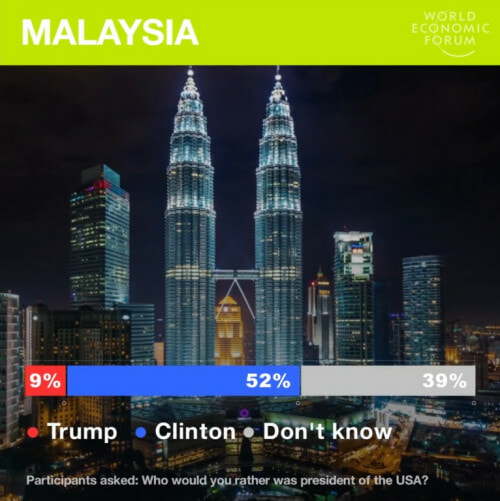 Over here in boleh-land we are also very much more pro- Hillary. It’s no real surprise given that most local media covering it such as FMT and MMO have been critical of Trump but glosses over Clinton.

Our pro left-wing stance is also a huge contributing factor, especially in the Klang Valley. 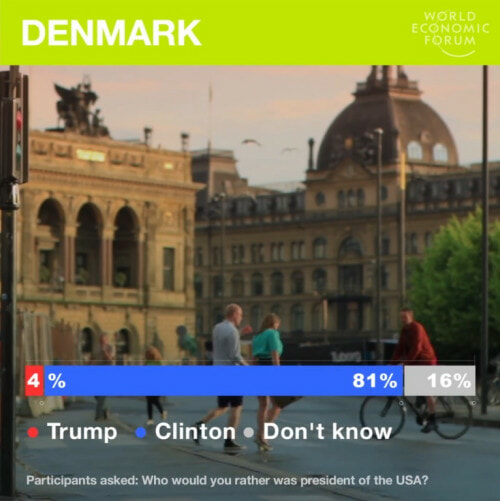 Denmark is a very liberal country, and I mean VERY liberal. The Danish people are, like most of Europe; pro-choice, open boarders and higher taxes. 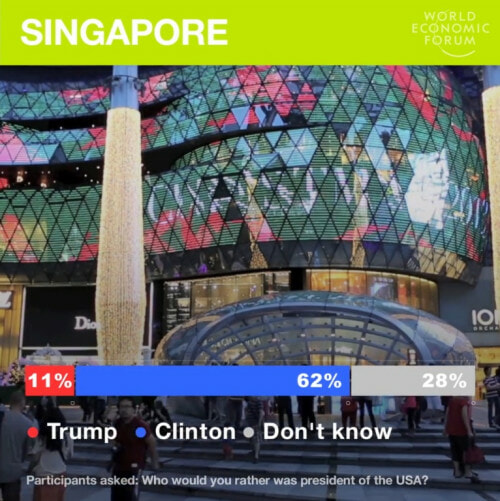 For similar reasons to Malaysia, Singapore would volunteer to be a blue state if they could.

Also, Singapore supports Hillary more than us and looking at the comments, they therefore think they are more progresif than us.

Someone put HXSM on the line pls! 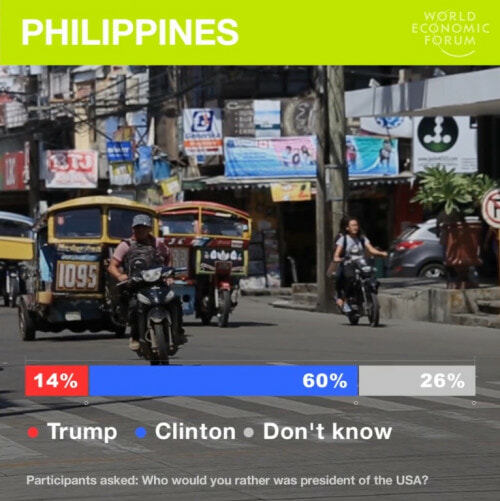 This one was mildly surprising. Hillary again did extremely well among Filipinos, but given her negative remarks about Catholics, this is news.

Nevertheless, it’s team #DumpTheTrump over there, however with the fleeting US-Philippines relations, this would be interesting to keep tabs on. 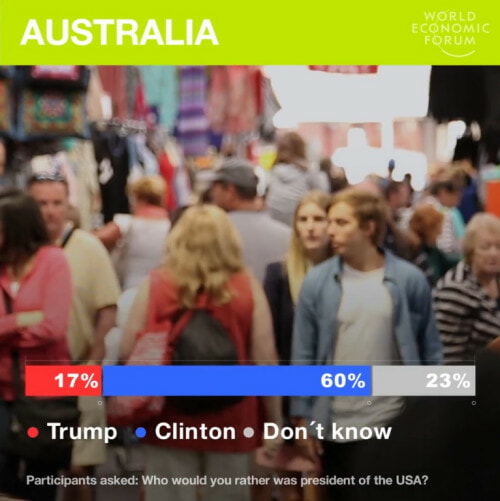 Yay! Hillary! #ImWithHer. This again was nothing much, Trump has become synonymous with bigot and his pro-gun stance is not doing well with Aussies. 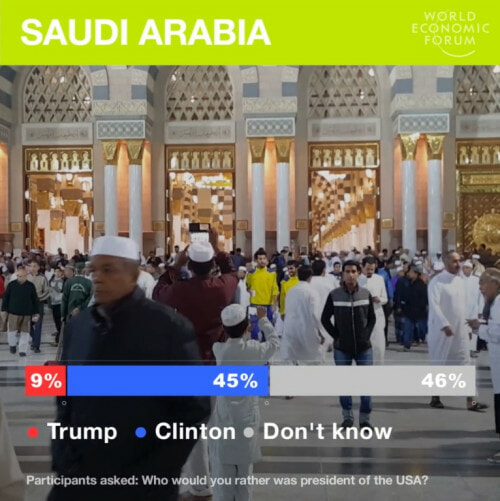 What a shocker! Saudis overall hated Trump which is understandable, given his intention to temporarily halt Muslim immigration and his desire to put certain radical mosques under surveillance.

There’s a small group of Saudis that blame Hillary during her time as Secretary of State for destabilizing the Middle East by voting for the Iraq war which paved way for the formation of ISIS/ISIL.