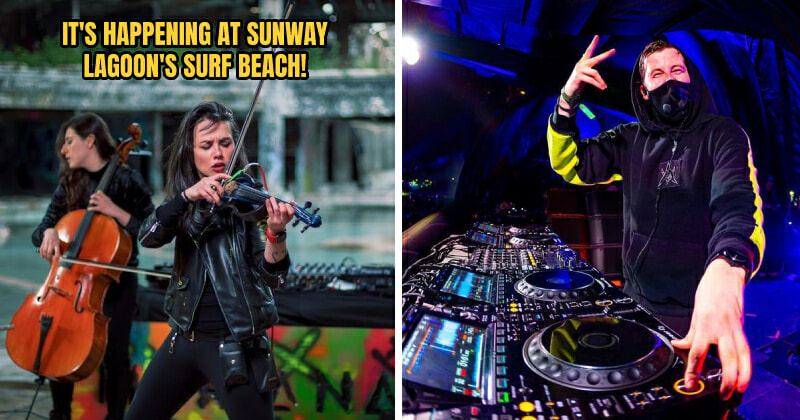 Calling all Malaysian party hearties! Have you had a satisfying enough fix of exciting music festivals and parties for 2022? If your answer is yes, then where’s the harm in going for one more? If your answer is no, then this festival is just for you!

Kick off the New Year with a bang at Grand Wave New Year Countdown 2023 this 31 December at Sunway Lagoon’s Surf Beach!

You read it here first, partygoers! The awesome folks at Grand Wave Entertainment are making sure you get your last chance to dance this year with this music festival adorned with a spectacular lineup of local and international artists!

Sponsored by the sempoi folks at Seni Jaya and featuring a stellar billing with big names in the music scene, come join Malaysia’s last and most super-hyped music event in 2022! 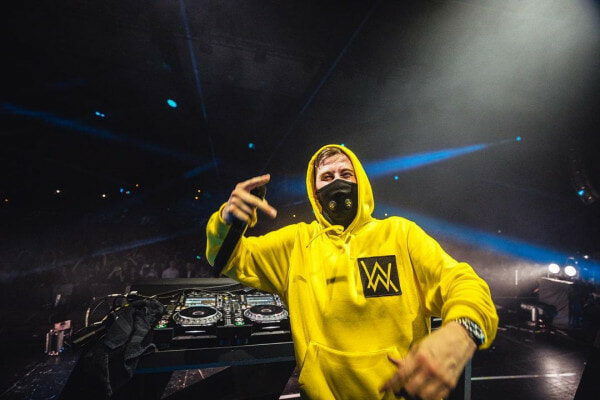 Well-known as the record producer behind the chart-demolishing 2015 single “Faded”, this Norwegian-British bedroom producer turned household-name DJ is lauded as one of the pioneers of electronic dance music in the 2010s! Now fresh off of his Walkerverse the Tour in Europe and the United States, Alan Walker is coming over to woo Malaysians with his world-famous electronic beats!

Placed at number 12 on the DJ Mag Top 100 DJs in 2018, this Dutch-Moroccan DJ is known for his hypnotic remixes of a variety of artists including Rihanna, 5 Seconds of Summer and even the industrial metal band, Rammstein! With so many sold-out worldwide tours to his name, R3HAB is now ready to bring his infectious beats right to Malaysia’s doorstep! 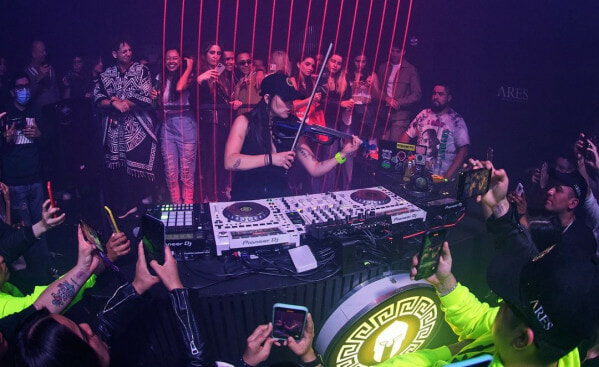 Hailing from Mexico, Mariana BO reinvents electronic music by combining beats with the violin! With her extraordinary blend of dance beats and violin music, Mariana has made a name for herself through various tours sharing the stage with David Guetta, Hardwell and more! 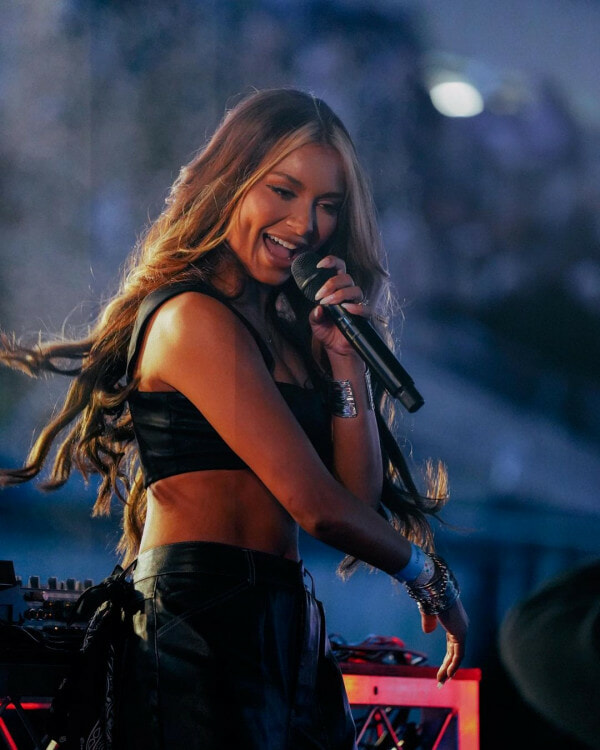 All the way from the Land Down Under is the eccentric synthpop artist Havana Brown, who started out as a DJ in Melbourne until she was scouted by the major music label, Island Records! After transitioning to being a pop singer, she broke through charts with her debut single, “We Run the Night” and gained worldwide recognition when the remix of said single reached #1 on the US Billboard Hot Dance Club Songs!

RayRay only started out as a 17-year-old producer who wanted to manifest her own art in the Taipei scene! Now that she’s on the fast track to world domination with her unique electronic sound dubbed as “alien bass”, Malaysian partygoers better be prepared to usher in her “Alien Invasion”!

And don’t forget about the superb supporting acts who are closer to home too!

That’s right; this festival will also feature performances by prominent Malaysian and Southeast Asian artists too, in addition to the awesome headliners! 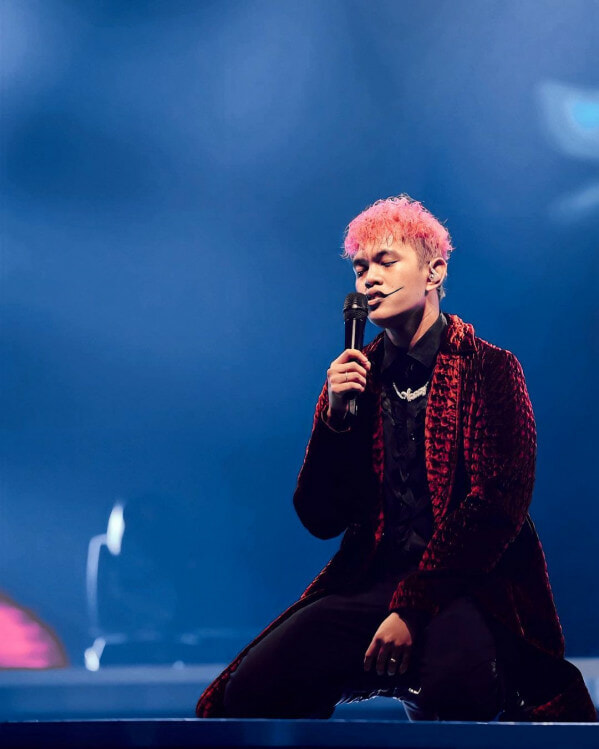 Starting off his musical career in 2016, Yonnyboii spent his first few years as a musician by sharpening his aptitude as a rapper and producer! After his first breakthrough in 2019 with his debut single “Takut” he has not shown signs of slowing down as his new singles such as “Salahku”, “Cemburu” and “Tak Sangka” have garnered millions of streams on digital platforms as well! 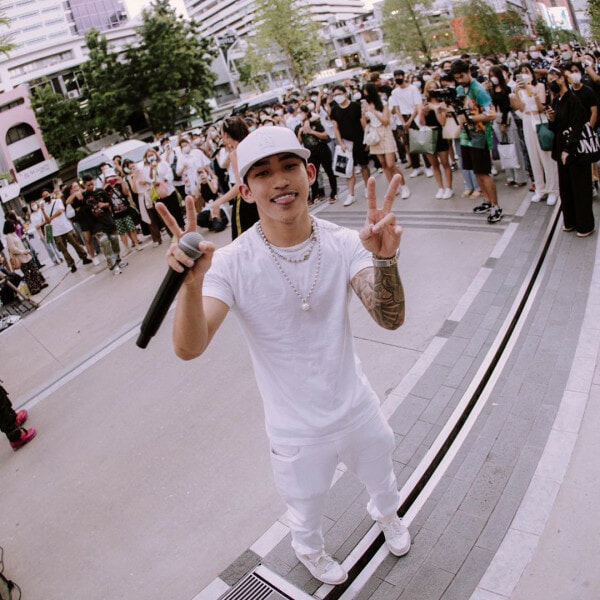 Ironboy first gained attention in the music scene with his 2016 mixtape “Loeg Dai Lew,” which was all the rage with netizens on TikTok and reached 55 million views on YouTube! Since then, his momentum in the Thai hip-hop scene kept going with new hits such as “K̆dī..” and “H̄lng thāng”, each of which accumulated millions of plays on streaming platforms! Now signed to Def Jam SEA, his performance at this festival is not to be missed! 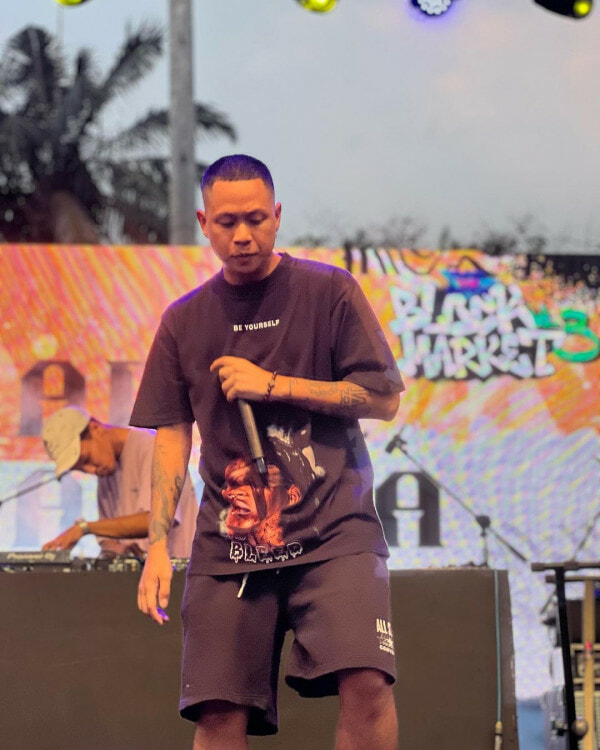 This American-born Indonesian started rapping with friends just for the heck of it until he joined the Indonesian rap scene back in 2007. Now back in Indonesia and pursuing music as a full-time career since 2017, Ben has kept himself busy by releasing four albums, countless mixtapes and managing the All Day Music label to platform fellow Indonesian artists in the hip-hop scene!

And that’s not all; check out the rest of this festival’s magnificent lineup below!: So there you have it; a New Year’s Eve night of performances by your favourite local and international artists, partying and MORE! What’s not to like? 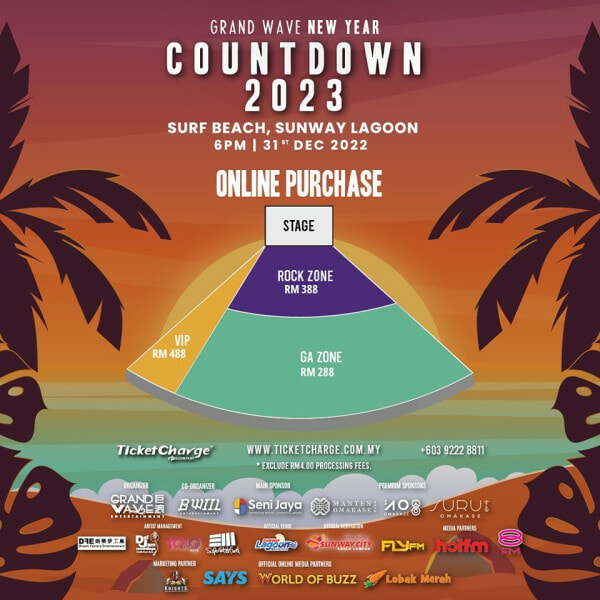 Walao, you caught us at the right time then because Online Purchase tickets are still available on their website! But they’re selling like hotcakes so you better act now and choose from one of these categories!:

What better time to snag your tix than now?!

Remember: tickets are already super limited, plus the Grand Wave New Year Countdown 2023 is taking place very, VERY soon this 31 December. So you better purchase yours on Ticketcharge NOW, NOW, NOW before it’s too late! And make sure to follow Grand Wave Malaysia on their social media pages to keep up with all the latest updates!:

*All prices shown are subject to a processing fee of RM4 per transaction.