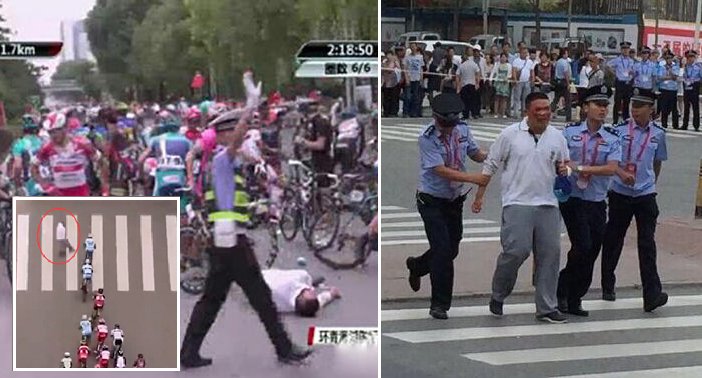 A Chinese man was the sole cause of a serious crash, after he casually walked across the street during a massive bike race.

The 2016 Tour of Qinghai Lake cycling competition was abruptly interrupted by a huge pileup of cyclists who tried to dodge the man who crossed the road.

According to the Shanghaiist, the cyclists were just three kilometers short from the finish line when the accident occurred. Dayummm!

The injured athletes were brought to a local hospital while some went ahead and finished the race.

The man who casually strolled along the street has been arrested by local police. But, through some crazy stroke of luck, he walked away from the whole incident unharmed.

Witnesses at the scene believe the man responsible for the chaos is mentally ill.

Chinese netizens have been quick to comment. One quipped, “At least he is using the crossroads and isn’t a jaywalker.” whilst some have been more sympathetic, “I heard that the man is mentally ill. Security should have stepped up to prevent this from happening.”