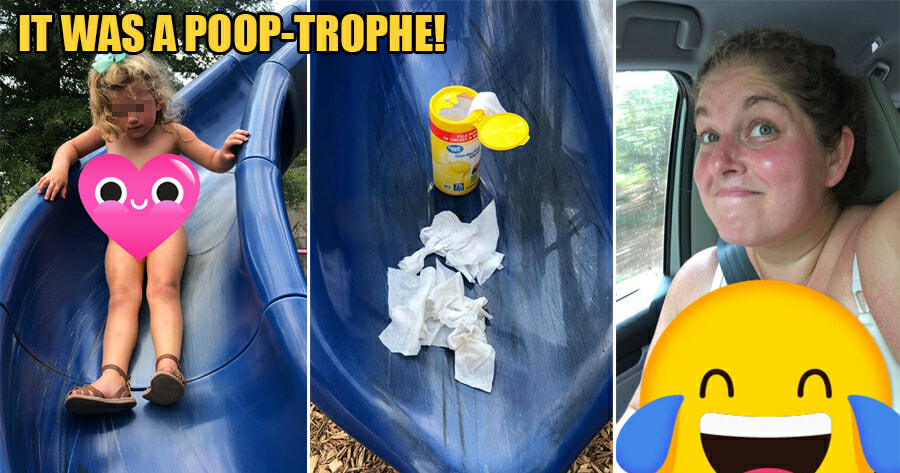 Taking care of a baby is just a roller-coaster ride of endless encounters with poop and diaper disasters, but I wouldn’t know myself as I’ve only heard the tragic stories that mothers have shared.

Like this mother who shared on her Facebook about an embarrassing situation she was in and how she “failed as a mother on so many different levels”. The post already has about 329,000 shares since 1st October.

Brittany was at the park with her two daughters, Sadie and Layla who were playing on the slide. She then saw that Sadie had ‘wet’ shorts and thought, “okay she’s peed out of her diaper, no big deal.”

But the closer she gets to Sadie, she smells that it’s not pee, it’s poop! Still, “what’s a poopy diaper?” she thinks.

However, it wasn’t JUST a poopy diaper as she realises it’s a “poop-trophe”.

“I’m talking one of them poops you usually see in a newborn, where it’s all up their back and down their legs and you contemplate just throwing the whole baby away,” she wrote.

Brittany then gets a diaper and wipes, but realises that there are only FOUR wipes left!

She starts looking for wipes in her van, and at this point, Sadie is standing naked in an empty parking lot with poop in her hair, down her legs and even on her shoes!

However, there are no extra wipes, no extra clothes, no extra anything in the van as Brittany remembered that she had just cleaned out the van the day before.

That’s when she heard a “painful SQQQUUUEEEAAAKKKKK of skin getting stuck to a plastic slide on the way down.”

“I look up and yes, of course, it’s Sadie. She’s going down the slide, butt naked, COVERED in poop, leaving a long skid mark of poop allllllll the way down on her way,” Brittany wrote.

“At this point I just give up. I chase down Layla, wrap Sadie in a blanket and buckle them in their car seats and leave.” 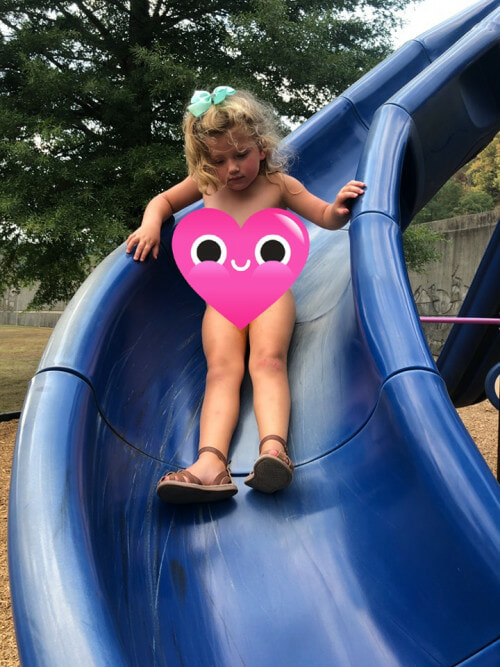 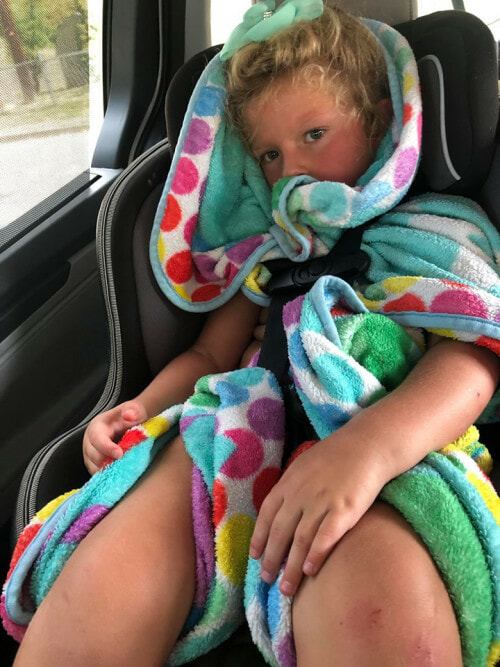 But Brittany wasn’t just going to leave the park with her child’s poop all over the slide. She reasons that one of her daughters was at home “deathly ill with a stomach virus” which Sadie might have caught.

“What if Sadie’s getting that virus? There’s no way I’m leaving my kid’s slug trail of possibly contagious feces on this playground so some other kid can get sick,” she wrote.

“We live maybe 5 minutes from the park, so I rush home grab Clorox wipes, that are conveniently on my porch because I had used them yesterday to clean a few parts on the van, then rush back.”

When she gets back to the park, no one else is there, so she leaves her van with her kids still in it and proceeds to clean the slide and rails.

But she then encounters a big problem. She was only able to reach the top and bottom parts of the slide while the middle part was out of her reach.

“I tried to climb up it, but was unsuccessful. Keep in mind I’m REALLY out of shape and just ran a mile and a half. I’m WEAK, uncoordinated. To say I was struggling would be an understatement,” she wrote.

Brittany then gets the “brilliant idea” to go down the slide and wipe it as she goes. So she goes down the slide feet first on her stomach to avoid the risk of getting a head injury if she were to go head first. 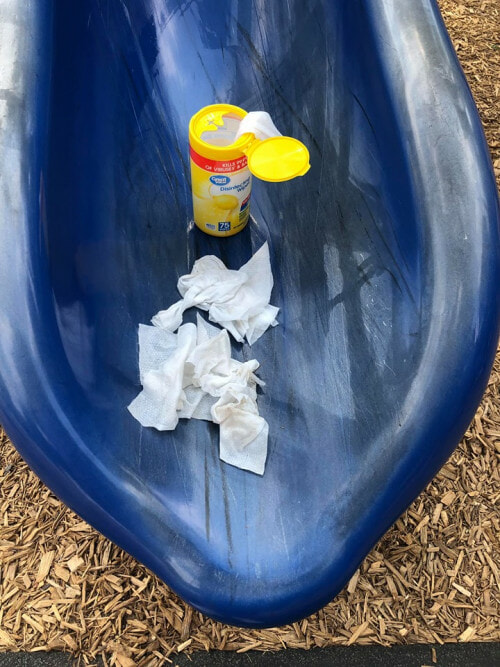 “(I’m) holding on to the side to slow myself down with one hand and wiping with the other. This was not easy. I did not look elegant or attractive, I’m sure,” she wrote.

“I’m 254lbs of sweaty fat flopping around this children’s slide like a fish out of water.”

Upon reaching the bottom, she’s satisfied with her cleaning job. But that’s when she turns around and sees a family glaring at her.

“I dunno how long they were there. I never heard them pull up. They never got out of the car. I genuinely think that we’re afraid of me, after all, I was an overweight seemingly childless adult, on children’s playground equipment,” she wrote.

“Now dying of embarrassment, I rush to throw away my wipes and get in the van. I look down and realise there’s poop all over my shirt. Of course, I went down feet first. My clothes got the bulk of the poop.”

Not wanting to get poop on her seat belt, nor wanting to put herself at risk of getting a ticket or dying from not wearing a seat belt, Brittany drives home in her bra! 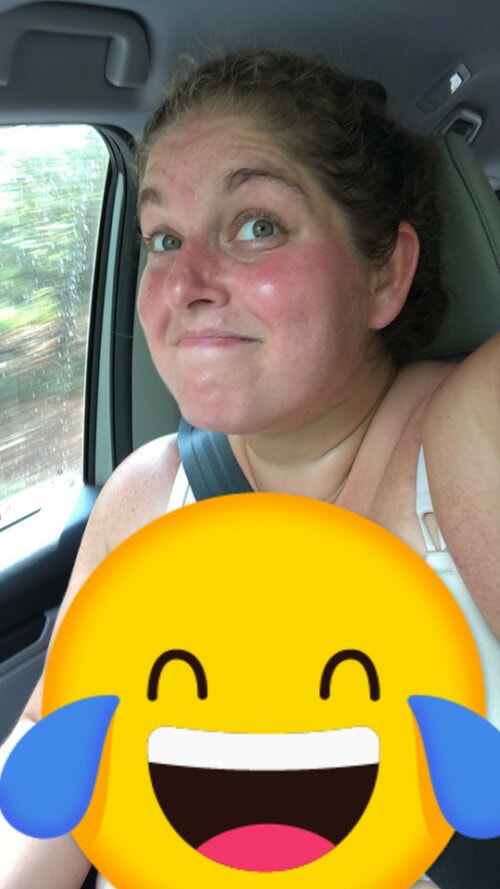 After getting home, she gets herself and her kids all cleaned up, although they’re all a little “traumatised”. She also shares a piece of advice that all parents can take note of.

“Always bring extra wipes, extra clothes, extra blankets, extra everything! 😂 Don’t clean out your car, ever. 😂 And if you aren’t mentally, emotionally, and physically prepared to roll around in another person’s feces… use a condom. 🙂🙃😂 You’re welcome! 😂,” she wrote.

I know what you’re thinking – this was such a sh*tty situation. I mean, what else is there to say about this? 😂

Also read: Woman’s Poop Has Been Leaking From Her Large Intestines Into Her Bladder Due to Rare Disease 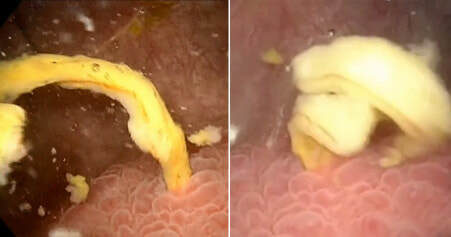