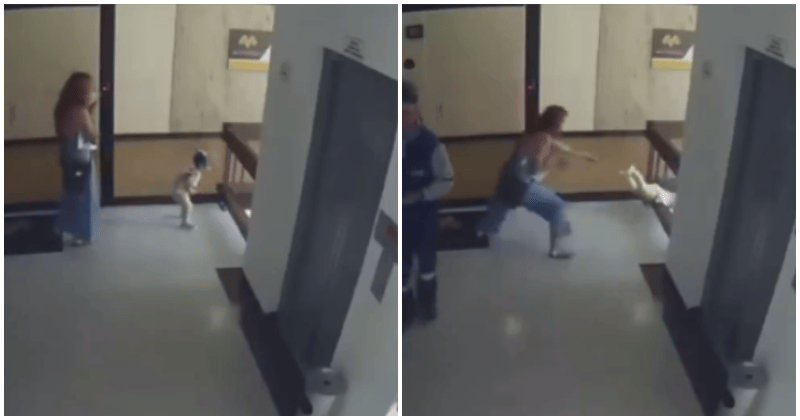 We all know mothers make our world go round because of the dedication and effort they put into raising us kids. We also know that sometimes, our mothers can get distracted by life in general, but they’ll always have our backs no matter what happens.

This mother, depicted in a now viral Twitter video by 999 Malaysia (@999Malaysia) proves that mums can be distracted but still have their child at the forefront of their thoughts. The incident, which happened somewhere in Malaysia, showcases the mother and her small child exiting an elevator with a postman.

She stops right outside an office lot while speaking on the phone with someone. She’s not holding her child’s hand, but it’s clear that her eyes are on her kid as her posture suggests she’s following his movements as he wanders towards the railing next to the elevator.

Within a split second, the kid trips and falls head-first through the railing and towards impending doom, but his (or her) mum springs into action (literally). Motherly instincts kicking in, she dives towards the railing and manages to catch her kid by the ankle with one hand. The postman can be seen running down the staircase, presumably to try and catch the kid from the bottom if he slips through his mother’s fingers.

Fortunately, his mother manages to pull him up as staff from the office lot rush out to help.

Netizens have since taken to the comments to share their praises of the mother’s quick reflexes while questioning the improper design of the building’s railings.

Let’s hope the maintenance team of the building, upon seeing this video, fixes the major flaw in their railing designs.

Waiting for injuries or even a death to happen before fixing a problem should not be the normal policy. 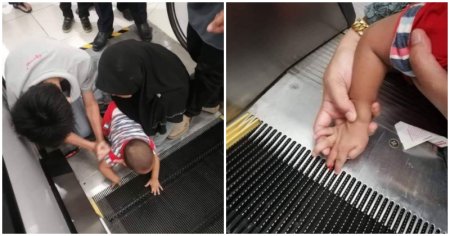