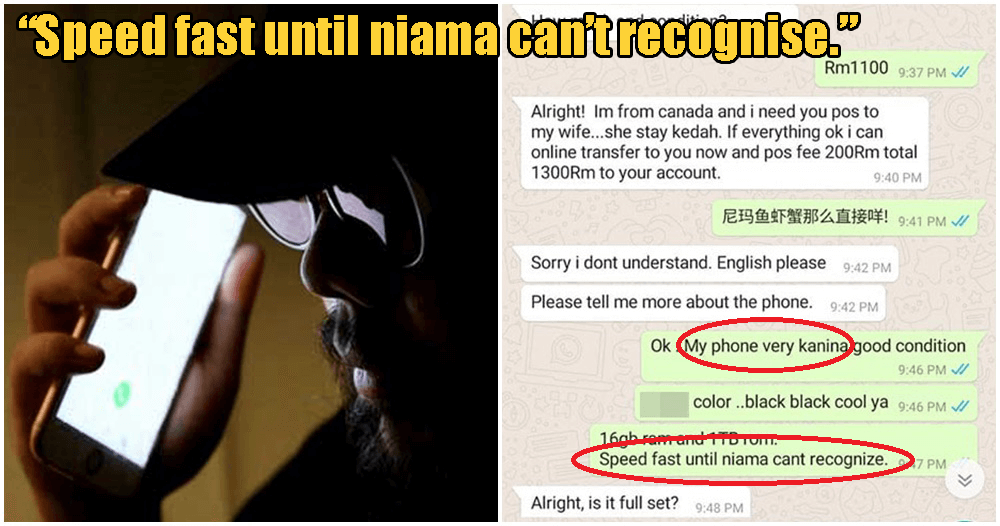 With all the scamming news going on lately that’s educating the public on the methods often used to scam people, you’d think these cyber culprits would be a little smarter with the way they operate their cons. Apparently not!

Recently, a Facebook netizen shared a series of hilarious screenshots showing a Whatsapp conversation between a phone seller and a potential ‘buyer’ who allegedly tried to shoot his shot at scamming.

The conversation starts off like any other normal transaction, with the buyer asking for the selling price of the phone. 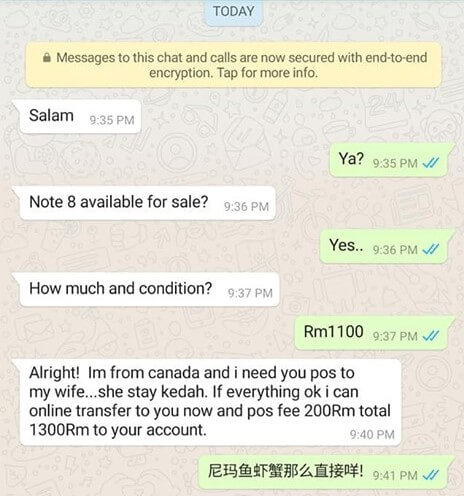 However, the seller could sense something was up when his “customer” requested for the phone to be delivered to his wife in Kedah before he deposited any cash to him at all.

Apparently, the buyer claimed that he was from Canada and was only willing to online transfer the cash when the seller agreed to Pos Laju the phone to his wife beforehand.

Hmm a bit sketchy la. The seller then even responded to a question in Mandarin, saying, “Walao why this guy so straightforward?”

As the seller began to doubt this guy’s true intentions, he decided to have a little fun with the “customer” who couldn’t speak Mandarin.

The seller started being very candid (to say the least) with his descriptions of the phone. “My phone very kanina (f*** your mom) good condition. 16GB RAM and 1TB ROM. Speed fast until niama (your mother) can’t recognize.”

Surprisingly this guy couldn’t take the hint. He still went on to ask if he was offering a full set for the phone! Maybe he really is from Canada 😂. 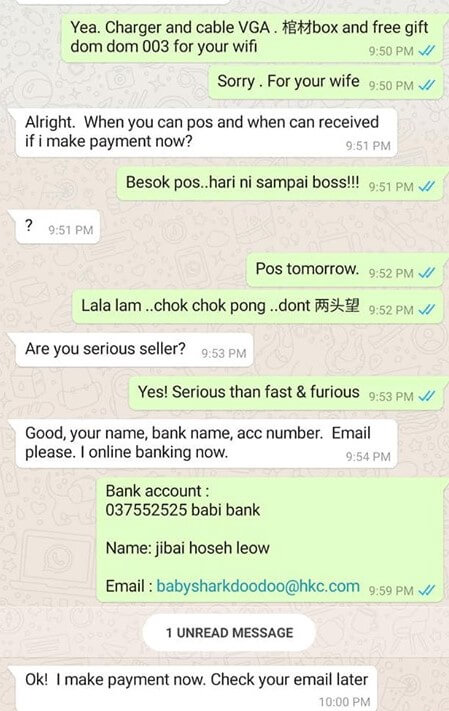 And this was only the beginning! Seeing as this “buyer” wasn’t willing to budge, the seller kept on with his hoax. “Yea charger and cable VGA. Casket box and free gift dom dom 003 for your wifi.”

What’s funnier is the fact that the buyer still remained (or perhaps pretended to be) clueless throughout the entire thing! Even when the seller started spewing nonsensical messages that didn’t make any sense! “Besok pos…hari ini sampai bos! (Tomorrow post, today will arrive boss)”

He even asked for the seller’s contact details because he was that INSISTENT on going through with the transaction!

The seller then replied to him with a bunch of ridiculous fake information about himself that had us in tears. 😂

What shocked us most about this story is the fact that the buyer had the audacity to say that HE WENT THROUGH WITH THE PAYMENT. 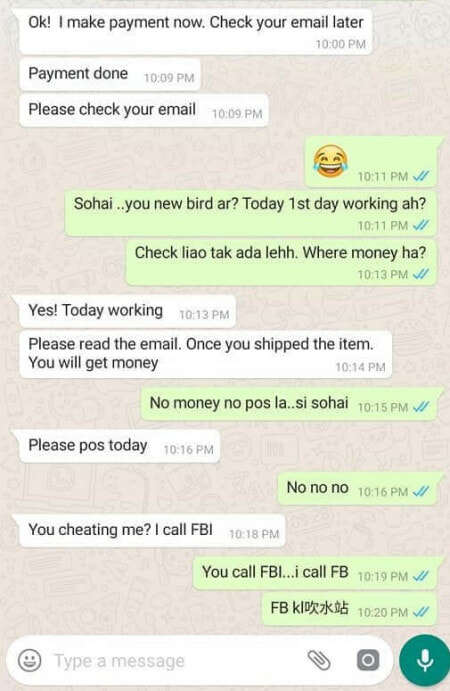 Obviously the email wasn’t even real but this buyer wasn’t letting it go! He even claimed that the seller was cheating him.

“You cheating me? I call FBI.” To which the seller replied, “you call FBI…I call FB”, saying that he will expose the buyer as a scammer to a popular Facebook group.

This buyer was relentless! In the end, the seller just gave up. He replied with “you’re so annoying” and proceeded to reject his calls and ignore all further messages. It was clear that this guy wasn’t going to break his act and there was no way he was going to sell his phone to a scammer. 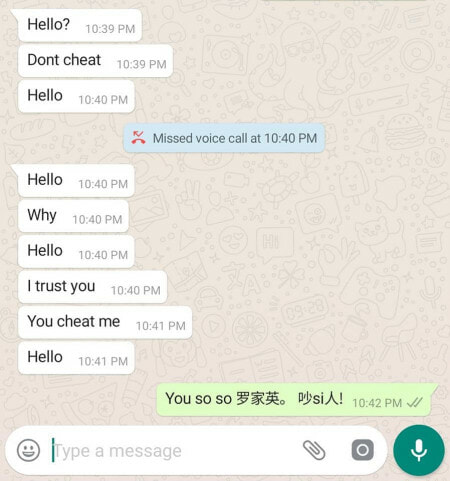 What a joke! Have you guys ever encountered scammers like these? Let us know in the comments below!

Also read: M’sian Scammer Who Was Actually Sent to Jail Before Now Identified After Other Victims Came Forward 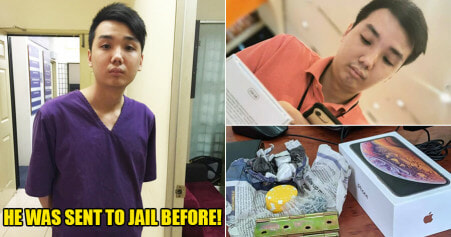