Success is for those who seek it and no one is too young for it!

While most of us are still stretching and warming up to life, young Naim Hamid had already taken flight and is only planning to go higher.

Focusing mostly on painting portraits and landscapes, this passionate 16-year-old received his education from Sekolah Seni Malaysia Johor (SSeM) and has produced 30 paintings up until now.

According to The Star, one of his paintings was sold for a whopping RM6,000! How many boba can you buy with that?

Currently, Naim is participating in the 2019 SPM Visual Art Exhibition (an exhibition that showcases the artwork of students who sit for art paper in SPM 2019) along with 17 other participants. 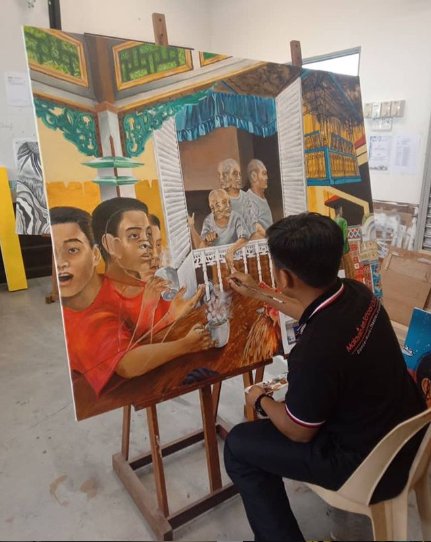 Naim’s explosive talent was acknowledged on the international level!
Among his most popular creations were the oil portrait of our lovable Prime Minister and his wife (cute)… 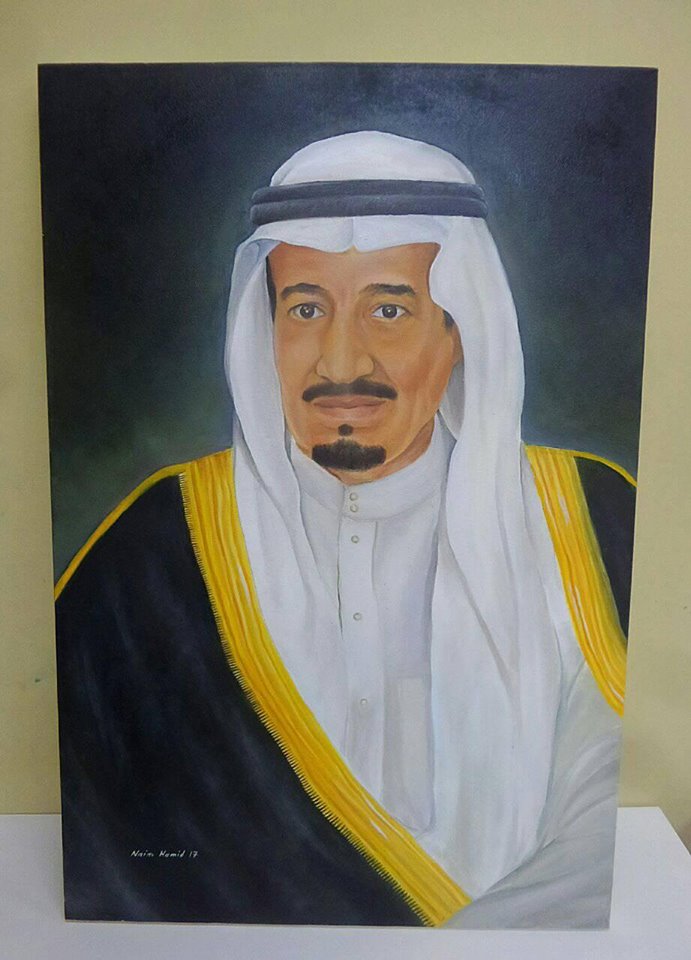 Naim was even able to personally hand over the painting to our Tun Dr Mahathir Mohamad last month at the Perdana Leadership Foundation office in Putrajaya and received great encouragement from him. #uwawww 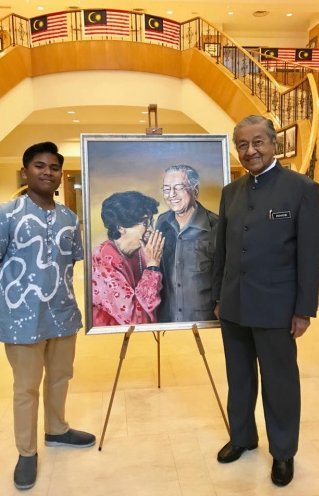 Not only that, two years back, he attended The International Book Festival in Riyadh, Saudi Arabia and his oil portrait of the king was presented to the Culture and Information Minister of Saudi Arabia at that time, Dr Adel Zaid Al-Toraifi by our Education Minister. 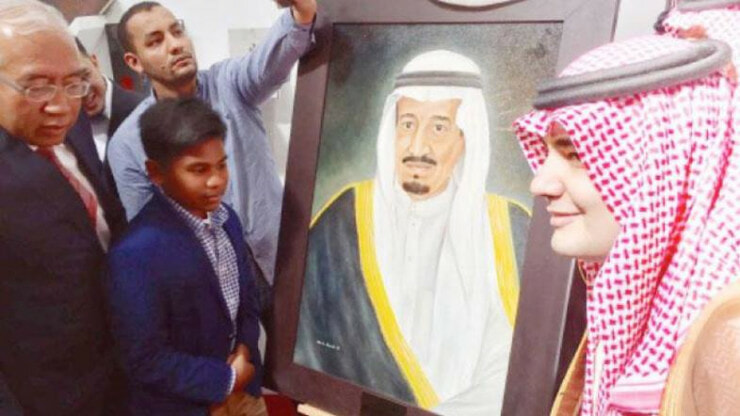 He even received The Recognition of Excellence at the 19th International High School Art Festival in Tokyo, Japan, last year! 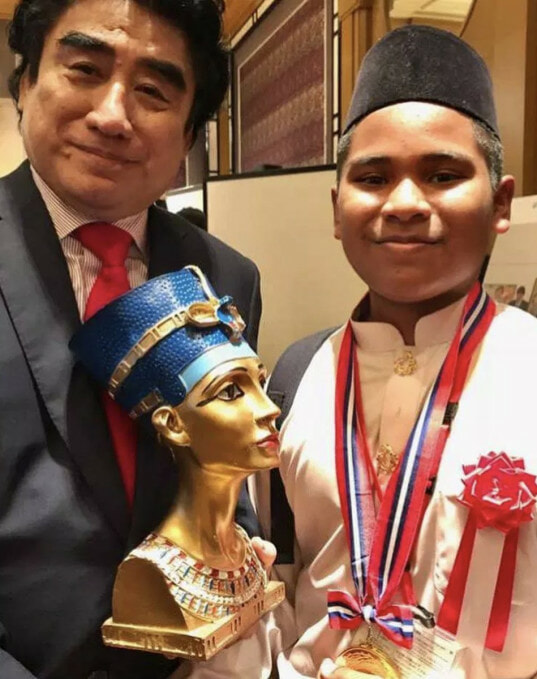 How did it all started?

His talent was discovered at the age of nine when a teacher spotted him drawing a pair of beautiful goldfish. 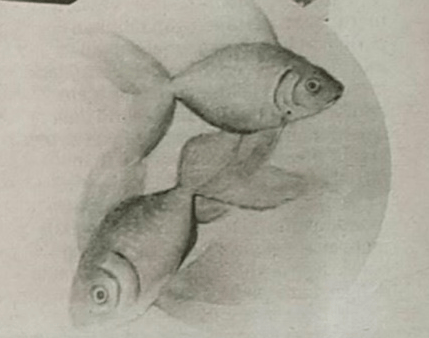 Before that, he would just draw Ultraman; the pair of goldfish was his first proper artwork.

“My teacher praised my work because it was detailed and he felt it was very good for a nine-year-old, and informed my parents,” he said.

Being attentive parents, his father and mother knew they have to do something in order for him to master the art. Therefore he was sent for art classes at Jomlukis! in Bangi, Selangor. Kudos to his parents for their quick actions.

As Einstein once said;

“Everyone is a genius. But if you judge a fish by its ability to climb a tree, it will live its whole life believing that it is stupid.”

His father, Prof Madya Dr Hamidin Abd Hamid, who is a lecturer at Universiti Malaya said that 80% of the profits from selling artworks will be saved for Naim’s education and another 20% will be donated to charities.

Naim undoubtedly have no problem in being an artist because he simple loves it. Inspired by a series of forest landscape painting by Jaafar Taib, Naim admitted that the local renowned artist is his idol and he would visit his studio often when he returned to Kuala Lumpur.

“He would always advise me not to give up and not to allow success to go into my head should I become famous someday. ”

Naim Hamid doesn’t plan to settle down here as he aimed to further his studies overseas or at Universiti Teknologi Mara.

Talent aside, Naim is very lucky to have such supportive and attentive parents. We are definite 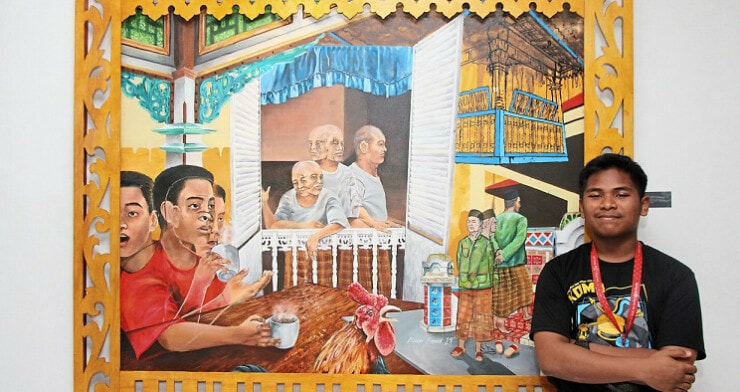 ly inspired by his story and hope that parents out there would do the same with  their own kids. Good job buddy! 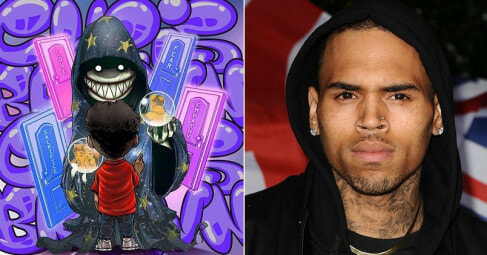 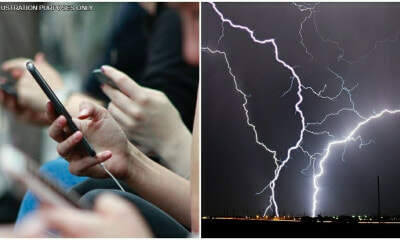 With the rainy season upon us and our neighbouring countries, we have been showered with not just rain but also... A mechanic was shocked after finding a six-meter long python on the car engine at a workshop in Kampung Batu... 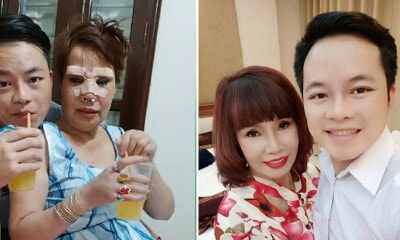 A 62-year-old Vietnamese woman who married a 26-year-old man recently went for plastic surgery and spent more than 100 million... 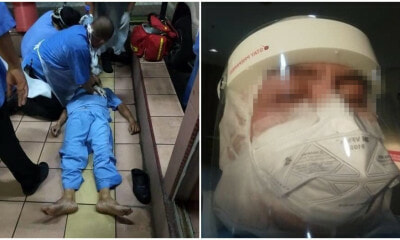 We’re reminded on a daily basis of what our frontliners go through battling an invisible enemy. They sacrifice their own... 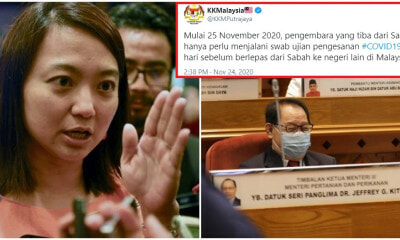 “If SOPs are changed to save yourself, will lawlessness be rampant?” Hannah Yeoh Calls Out Double Standards

On 24 November, several opposition MPs had questioned Keningau MP Jeffrey Kitingan on whether he had completed his mandatory self-quarantine...