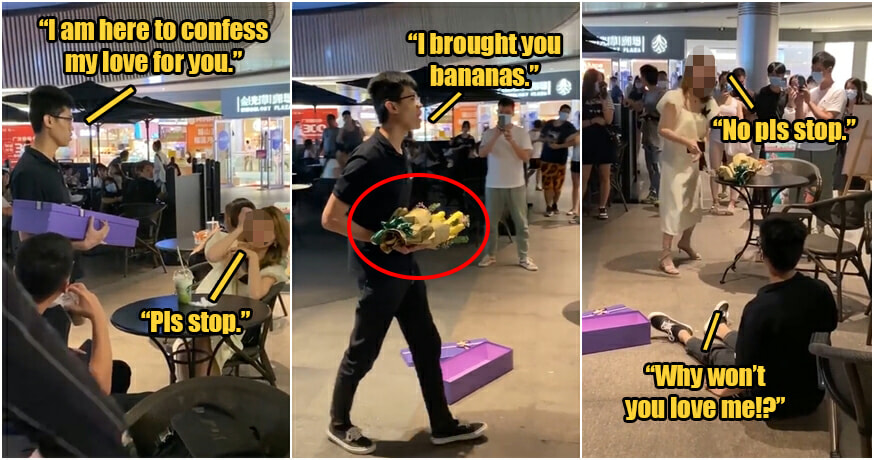 We’ve seen exorbitant displays of love and affection done by couples who truly can afford to splurge for the ones they love. Whether it be a bouquet of roses or a bouquet of RM100 notes, there will always be newer and more innovative ways that men and women alike will find to raise the bar.

Just recently, a young man from what is assumed to be China has gained viral fame across social media after video footage of him confessing his love to his crush was widely shared. However, it wasn’t so much the sheer cost of his gesture that caught the eyes of many netizens, but rather, his peculiar choice in the gift.

A bouquet of bananas.

Proclaiming his love for the young woman after having found her having coffee with another male friend at the atrium of a shopping centre, he unveils the ‘handmade’ creation before an audience of curious onlookers before going down on his knees.

“I brought you a very special gift, and I wanted to confess before everyone, the fact that I have had a crush on you for the longest time. I know you like eating bananas, so I made this especially for you.”

His crush, who initially appeared to be amused by it all, quickly grew increasingly embarrassed and aggravated by the display as he continued to pursue her approval with increasing tenacity. Standing firm, she turns away from his advances and tells him that she isn’t interested, which prompts the man to then lay on the ground and throw a tantrum. Agitated, she storms off.

The series of videos, which was first uploaded over DouYin, China’s TikTok counterpart, became a viral sensation with many florists businesses taking the opportunity to offer similar ‘banana bouquets’ as a joke. The man in the video eventually released a statement of his own, saying that he had intended for the whole scene to play out in the manner that it did.

“I believe that if you truly loved someone, you wouldn’t care what others think of you.”

The video has garnered mixed reactions from audiences, with some applauding the man’s courage for doing the things he did, while others condemned him for harassing the clearly uncomfortable young woman and going to the extent of throwing a tantrum.

Guess he really was ‘bananas’ for her, huh?