The dust from the political coalition has just started to settle but it looks like the chaos is far from over. Several people have been arrested for leading protests and posting defamatory comments against the 8th Prime Minister, Tan Sri Muhyiddin Yassin. Not satisfied, some even took to questioning the Agong’s judgment which is a criminal offense and those who did it were subsequently arrested. Amongst all the backlash, the comment left by this woman seemed to take it a step too far.

A Malaysian Facebook user, Penny Tai, has been arrested after leaving threatening comments towards the eighth Prime Minister. During the live telecast of Tan Sri Muhyiddin Yassin’s swearing-in ceremony, Penny left a comment asking if she could hire any killer to assassinate the Prime Minister. 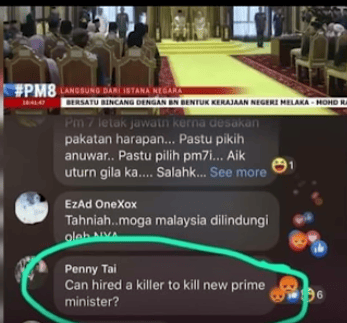 “On 2nd March 2020 around 2 pm, a woman has been apprehended at Ampang Jaya and we have even confiscated her handphone for investigation purposes.”

He added that the suspect was an assistant manager of a clinic in Singapore and didn’t have any political background. In fact, preliminary investigations revealed that she wasn’t even a registered voter. Datuk Fadzil further advised netizens to be careful with what they post on their social media and to take full responsibility for their actions.

Let’s get this straight before you make or leave any political comments, think a thousand times and remember that it won’t take long for you to be apprehended. Also, before making any comments, make sure you’re a registered voter!

Also read: 35yo Perak Man Arrested After Posting “F*ck You Agong” on FB Amidst Political Turmoil 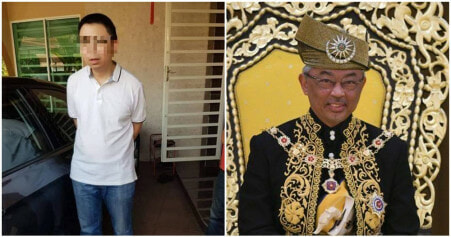