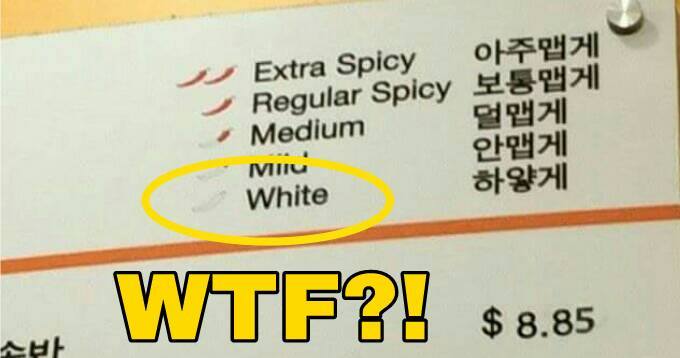 Recently, a picture of a ‘racist’ Korean menu went viral as it labelled the least spiciest level to be ‘white’, DailyMail reported.

There are multiple stereotypes about each race and one very common stereotype for Caucasians is that they cannot handle spicy food.

Of course, stereotypes are never true as just one thing cannot represent everyone of that particular group. So, saying that all Caucasians cannot eat spicy food isn’t true at all.

However, this Korean restaurant located in Toronto, Canada had labels for their levels of spiciness. And the least spicy one was unfortunately called ‘white’. 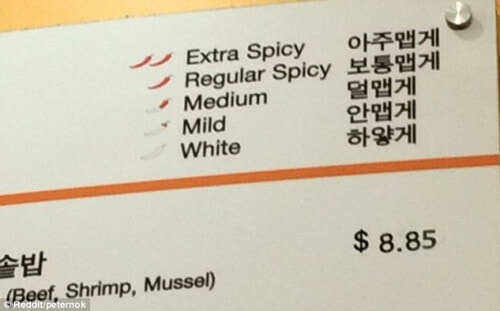 The picture was first uploaded onto Reddit and soon enough it went viral as people started to debate whether it was racist or not.

Many netizens were offended by the allegedly discriminating word. Many of them complained that they are sick and tired of all the jokes.

“It’s not funny anymore. I’m a white guy and I’m sick of all the jokes on Reddit about everyone else’s race.”

“As a white person when I go into an Asian restaurant and say I want spicy, it is never spicy. It’s like they don’t trust me.”

Meanwhile, other netizens tried to explain that typical Korean food that’s not spicy is usually white in colour. This is because the spicy foods there are ladled with chillies – be it in the form of paste, flakes, or the raw form.

Hence, spicy foods are usually red in colour. So, the ‘white’ in this sense is to describe the colour of the food. It is NOT the stereotype of white people being unable to consume hot stuff.

To further prove that it wasn’t meant to be a racist remark is the difference in the Korean spelling.

In Hangul, the Korean language, the spelling for a white person is “백인” (Baek-In). Meanwhile, the spelling in the menu is “하얗게” (Ha-Yah-Geh) which is white colour.

Another netizen enforced the truth in this word difference. She explained that even Chinese words to describe the colour white and white people is completely different.

“It’s only racist when you have a racist mind yourself. In Chinese we use the word white as plain too, just to describe the food, stop being offended by everything for Christ’s sake.“

So what do you think? Was it really just a simple language barrier or do you think that all Koreans are low-key racists?