Recent changes in the registration and online classes at higher learning institutions have been nothing but troublesome for students.

With many stranded in their dormitories, out of pocket money to make the journey back home and generally in 1001 hardships, it is always good to hear stories of individuals stepping up and lending a much-needed hand to those who are unfortunate.

Popular philanthropist, religious figure and businessman Ustaz Ebit Lew were among those individuals.

Understanding the plight of the students, Ustaz Ebit Liew decided to rent a bus to send the students of UPSI back home and even gave them pocket money to ease their burden.

In his Facebook status, he writes, “I feel saddened when a number of students texted me of their hardships.”

“I decided to lend them a helping hand by renting out a bus to send them back to the east coast. Other universities are also my target.”

But woe behold the story does not end there. Apparently, there were certain parties who were not at ease with the help given by Ustaz Ebit Liew. 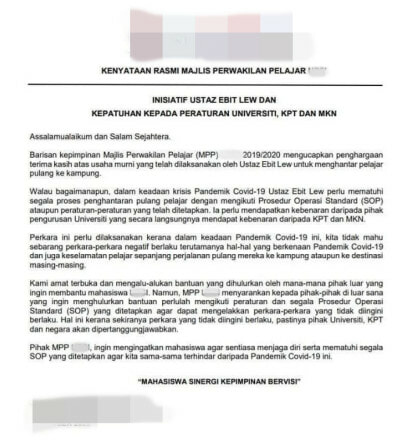 In the letter, Ustaz Ebit Liew was advised to follow standard operating procedures (SOP) when sending the students back home. He was also further ‘advised’ to obtain permission from the university and MOHE on the matter.

Not wanting to spread wildfire, Ustaz Ebit Liew issued an apology letter, stating that all he wanted to do was help. 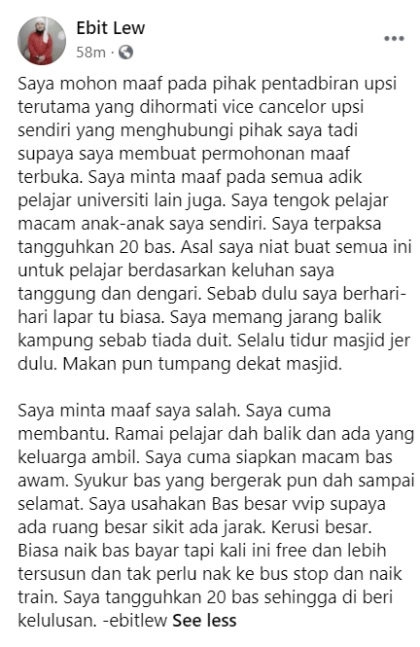 “I would like to extend my apology to the university as I view these students as if they were my own children.”

“My actions were based on the fact that I too once went on for days without food, was without money to go back home, slept in mosques and even ate there when I was studying.”

“I ordered a VVIP bus to ensure that social distancing is observed because of the ample space. For now, I have halted up to 20 buses in view of recommendations in place requiring me to obtain authorisation from all parties.”

Shouldn’t his efforts be met with a pat on the back instead of condemnation? What say you? 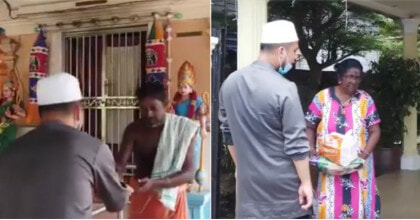