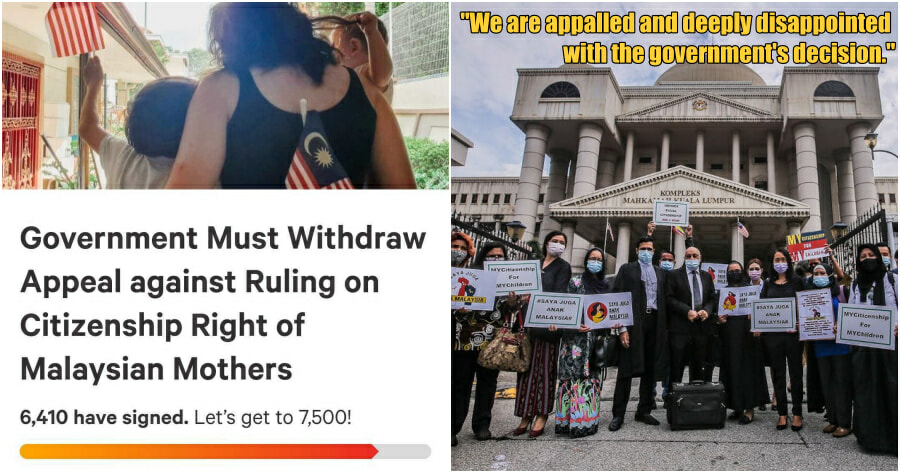 “We will not tolerate an administration that continues to defend archaic and sexist laws.”

Just last week, on 9 September, non-governmental organisation Family Frontiers Malaysia shared the good news that the Kuala Lumpur High Court had affirmed the right of Malaysian mothers to confer citizenship by operation of law on children who were born abroad. This would allow Malaysian mothers to be on an equal basis with Malaysian men.

High Court Judge Datuk Akhtar Tahir, who made the decision said that the word ‘father’ in the Second Schedule, Part II, Section 1(b) of the Federal Constitution must be read to include mothers.

This decision was made while allowing the originating suit, which was filed to seek a declaration that the children of Malaysian women married to foreign spouses are automatically eligible to acquire citizenship even if they were born abroad.

The decision by the KL High Court had received praise from several Cabinet ministers and numerous other organisations and human rights groups. 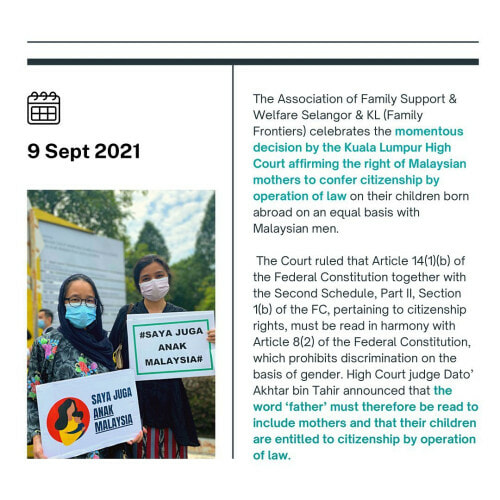 However, it was reported yesterday (13 September) that the government has decided to appeal the decision of the Kuala Lumpur High Court just days after the historic decision. The appeal was made despite the pleas of Family Frontiers along with a total of 116 other organisations and 52 individuals who urged the government to not appeal as it would only further perpetuate gender discrimination.

An appeal would also bar the expedition of registration of Malaysian identification documents for children born overseas of Malaysian mothers and non-Malaysian fathers. 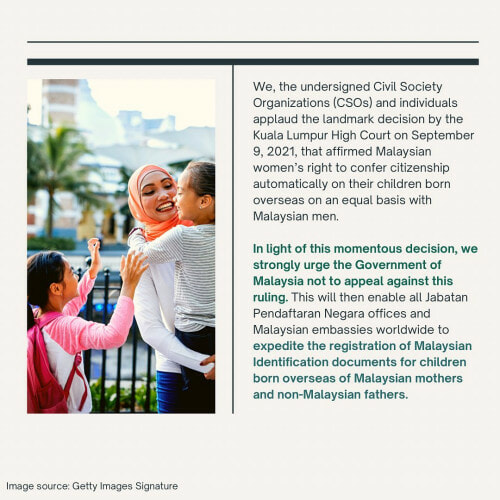 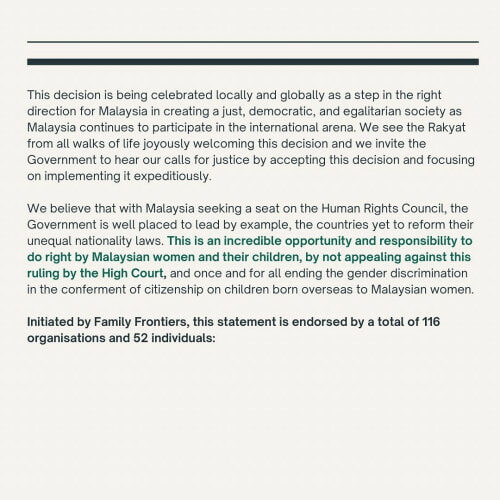 It was reported that Attorney General (AG) Tan Sri Idrus Harun had confirmed that a notice of appeal against the ruling made by the Kuala Lumpur High Court was filed yesterday, 13 September and that the Attorney General’s Chambers (AGC) will be acting for the government in the legal action to reverse the High Court’s decision.

The decision to appeal hit with anger

“Three federal ministers had openly supported the decision. We are therefore shocked at the government’s move to appeal, and we see this as a betrayal of the rights that are long overdue to Malaysian women,” they wrote.

“The government had an opportunity to embrace the decision, and move the needle towards greater justice and equality for its women citizens. Instead they have chosen to perpetuate this gross injustice.”

The statement further reads, “The judgement lifted the anxiety that plagued us with the uncertainty of our children’s status, well-being and future. The Government, by appealing against this decision, has delayed justice not just to Malaysian women, but their children and their extended families. Justice delayed is justice denied.” 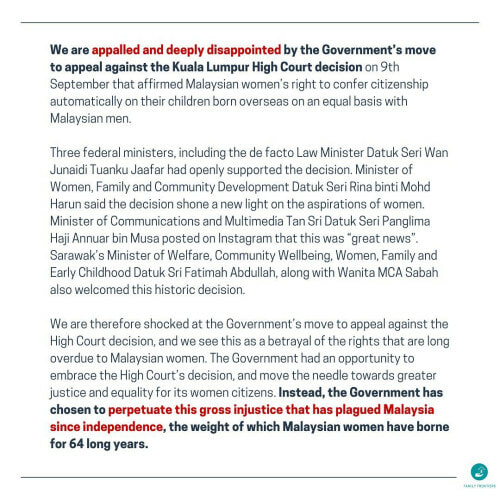 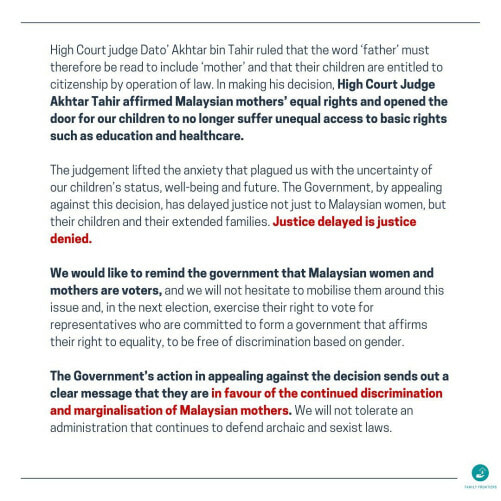 “We will not tolerate an administration that continues to defend archaic and sexist laws.”

Family Frontiers has also set up an online petition titled ‘Government Must Withdraw Appeal against Ruling on Citizenship Right of Malaysian Mothers’ following the news and after less than a day, the petition currently has over 6,000 signatures. 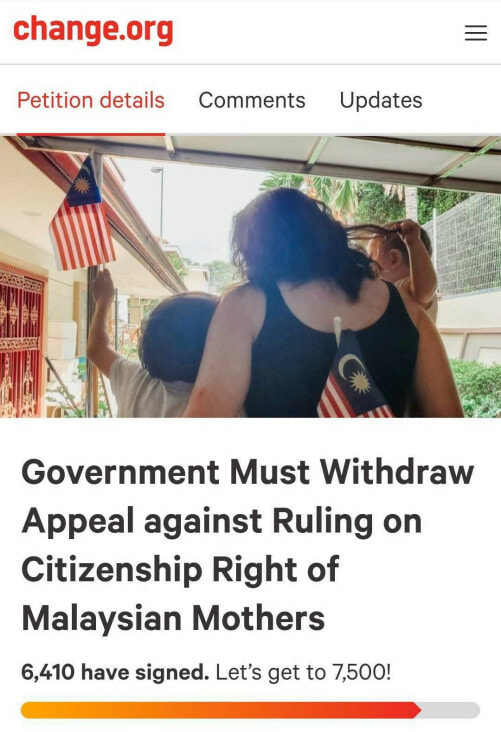 “I read with disgust the Perikatan Nasional government’s latest decision to appeal and to set aside last week’s High Court decision that children born overseas to Malaysian mothers are entitled to citizenship by operation of law.” 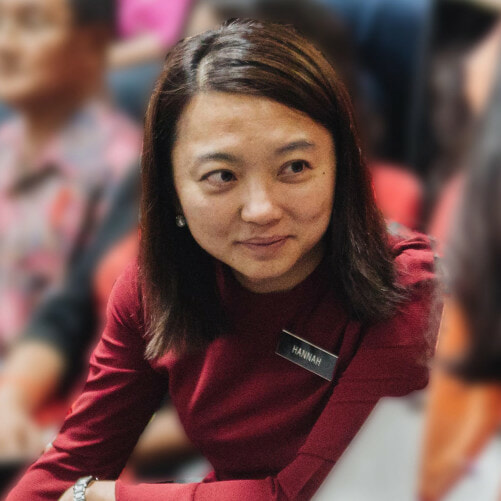 She pointed out that just days ago, Women, Family and Community Development Minister Rina Harun had publicly welcomed the court decision, “describing it as a new ray of hope for Malaysian women”.

“As the Attorney General’s action clearly contradicted that public statement by the Women Minister, one cannot help but wonder if this is a double-minded Government or is it just another case of the Women Minister’s being clueless about her responsibility to champion equality for women?”

Yeoh called for Ismail Sabri to urgently instruct the Attorney-General to withdraw the appeal and similarly instruct the Home Ministry to respect and implement the High Court’s decision.

“This is Ismail Sabri’s 100 days test to show he can tame his multi-headed Government and bring relief to these suffering mothers and their children,” she added. 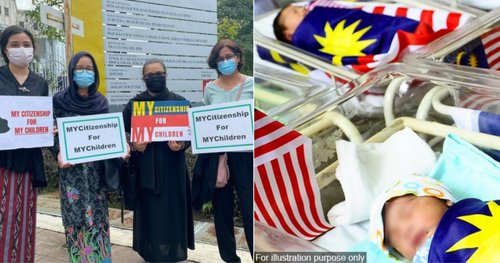