Eight prisoners were hailed as heroes after they reportedly broke out of their holding cell in the basement of the District Courts Building in Weatherford, Texas for a rather unexpected reason — to save the life of their guard, according to ABC affiliate WFAA.

Footage from a security camera on June 23 shows the inmates who were in shackles being held in a holding cell. From the lower right corner, one can roughly make out the image of a guard.

The lone guard had been chatting and joking with the inmates who were in a locked room when he suddenly slumped over his chair, unconscious in an apparent heart attack.

Nick Kelton, one of the eight inmates says, “he just fell over.”

“Looked like an act. Could have died right there.” 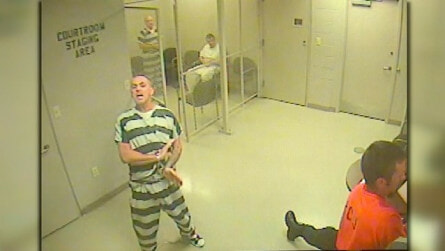 Aware of not just the trouble, but also the danger of their actions, the inmates decided against their better judgement and broke out of  their cell to check on their jailer.

“We were worried they’re going to come with guns drawn on us,” Kelton tells WFAA.

When they couldn’t detect a pulse on the fallen guard, the inmates began to call for help; they banged on doors and even screamed. Eventually, their cries caught the attention of other deputies that rushed over.

One prisoner, even tried using the radio to signal for help.

“We were going to call ‘Mayday’ or something,” says Kelton.

Parker County Sheriff’s Sgt. Ryan Speegle was the first to arrive at the scene. He admitted he didn’t know what to expect. 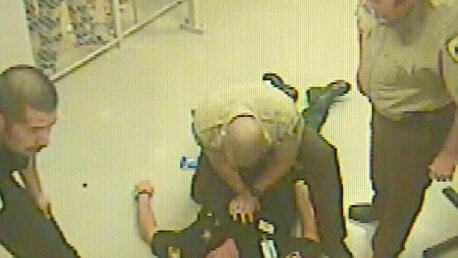 “He had keys, had a gun. It could have been an extremely bad situation.”

From the video, Speegle got the inmates back into their cell, while other deputies began administering CPR to the guard. Paramedics too arrived and shocked the guard to regain a pulse.

Nick Kelton is a meth addict, and this is his fourth time in prison, he says in the interview that he just can’t stay clean.

The guard who is back to good health, was scheduled to resume work in the week after the incident. Ever since then, Kelton and the other inmates have been branded heroes.

From WFAA, ‘Kelton and the other inmates went to court expecting to do time, not to give it.’

“It never crossed my mind not to help whether he’s got a gun or a badge,” Kelton told the press.

The news has gotten people everywhere to rethink about the ones who are placed behind bars. Not all are heartless, after all, they are still human.