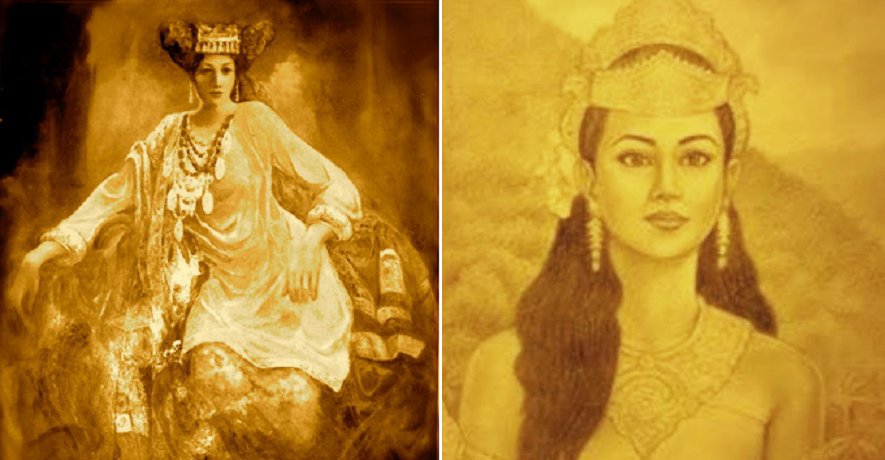 Growing up, we’ve all heard stories about Cinderella and Snow White waiting for their Prince Charming to find them for a happily ever after. Which is great (because everyone deserves a happy ever after), but did you know that our Malaysian princesses actually kicked ass and made the active decision to have their own happy ending?

In conjunction with International Women’s Day, here are some of the badass puteri of Malaysian folklore that prove Malaysians have their fair share of princesses, queens and damsels whose heroes are the ones in distress. 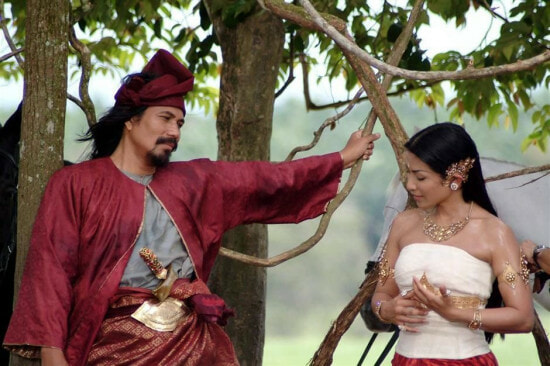 I’m sure this popular story is one all of us are very familiar with. Did you not watch the movie with M. Nasir as Hang Tuah?! Legend has it that during the rule of Sultan Mansor Shah of Melaka, there lived a fairy princess in the magical palace at the the peak of Mount Ledang. Tales of her beauty and magic powers travelled near and far, soon reaching the ears of the sultan. 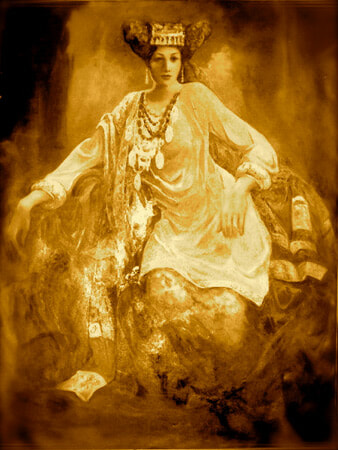 Determined to marry her, the sultan sent Hang Tuah and his group of warriors to retrieve the Puteri from Mount Ledang. Hang Tuah and his troupe found the Puteri and conveyed the sultan’s proposal. The Puteri then gave them 7 conditions for the sultan to fulfil – a golden walkway from Melaka to the mountain, a silver walkway from the mountain to Melaka, seven trays of mosquito hearts, seven trays of the hearts of germs, seven barrels of young betel nut juice, seven barrels of virgin tears and a silver cup filled with blood from the sultan’s son – before agreeing to his proposal. Of course, the sultan was unable to fulfil these impossible demands, though he did give it a shot but ended up leaving his kingdom in total ruin from his efforts. Legend has it the Puteri still lives in her magical palace on the peak of Mount Ledang to this day.

Now, she’s someone who knew how to make a man work for her! 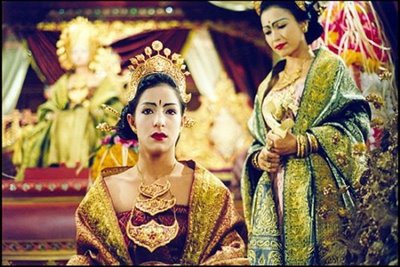 The story behind this mythical princess involves two sisters, an arrogant prince (of course this is a must-have), blood and the moon. The legend goes that the Sultan of Kedah had two beautiful daughters, Puteri Zaleha and Puteri Mariam. Zaleha was very beautiful and was said to have white blood instead of the usual red.

News of Zaleha’s beauty and rare white blood spread throughout the regions and caught the attention of the Prince of Acheh. The prince then waged war on the nation of Kedah, vowing to cease attacks only after the white-blooded princess agreed to marry him. Because the Prince did not know what Zaleha looked like, Mariam agreed to take her place instead and married the Prince. 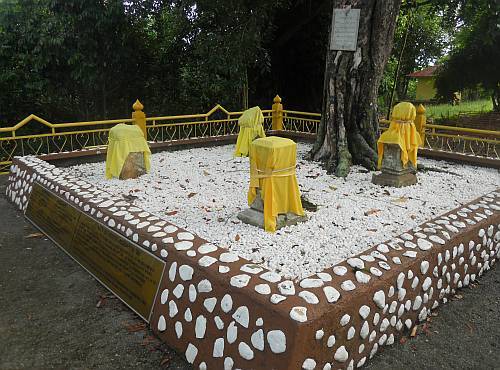 Their secret was discovered when Mariam accidentally pricked her finger and red blood started flowing from the wound. Angry at the deception, the Prince sent his army to Kedah to claim his true bride. However, Zaleha was nowhere to be found. Hearing of the attack, the sultan hid Zaleha deep in the forest, where even moonlight would not touch her. Hence her nickname ‘Puteri Lindungan Bulan’ (Princess Hidden by Moonlight). Her tomb sits on Seputeh Hill and it is said that the moon still refuses to shine on her tomb even to this day. 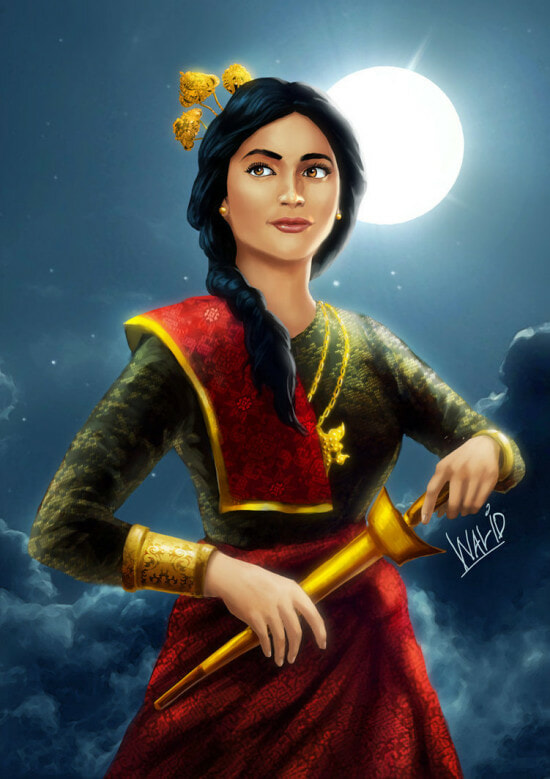 This story is very much a tragedy. Tun Fatimah was the daughter of the Bendahara of Melaka in the 16th century and her beauty had no bounds. During one of her excursions, she fell in love with a commoner and soon they were wed.

Although her father had no objections to the marriage, it was customary for the daughter of the Bendahara to marry the Sultan. This gave the Bendahara’s enemies an opportunity to bring him down. They accused him of treason and convinced the Sultan to slaughter all the men in the household, including Tun Fatimah’s husband. It might be good to note that the Sultan really wanted to marry her too.

The Sultan then took the women of the household under his protection at the palace and eventually married Tun Fatimah. During her rule, Tun Fatimah exacted revenge on all those who slandered her father and even led the fight against the Portuguese when they invaded Melaka. It is said, however, that Tun Fatimah never smiled again. We’re almost convinced that she started the RBF. 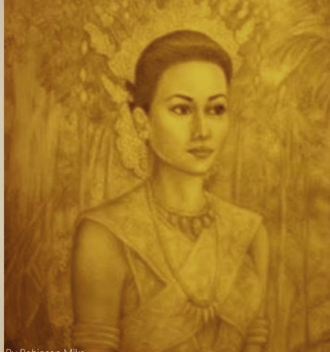 Illustrations used with the permission of the author of hikayat, ninotaziz

This is the story of two princesses, Santubong and Sejinjang, who hail from the Land of the Hornbill. The two celestial princesses were sent down to earth by Raja Dewata Mulia to settle a dispute between two villages. The raja gave the princesses one condition: they were never to argue with each other.

The princesses settled the dispute and helped the villagers prosper by teaching them the art of weaving and rice threshing. All was well until one day, when the two princesses fell in love with the same man and a violent quarrel ensued.

As punishment for disobeying him, Raja Dewata Mulia turned the sisters into the islands and mountains of Sarawak. If you travel to Gunung Santubong, you can see the mountain chipped on one side where it is said that Puteri Santubong’s cheek was cut. Puteri Sejinjing’s shattered head pieces, in turn, became the islands of Kera, Satang and Talang-talang. #MindBlown (pun not intended) 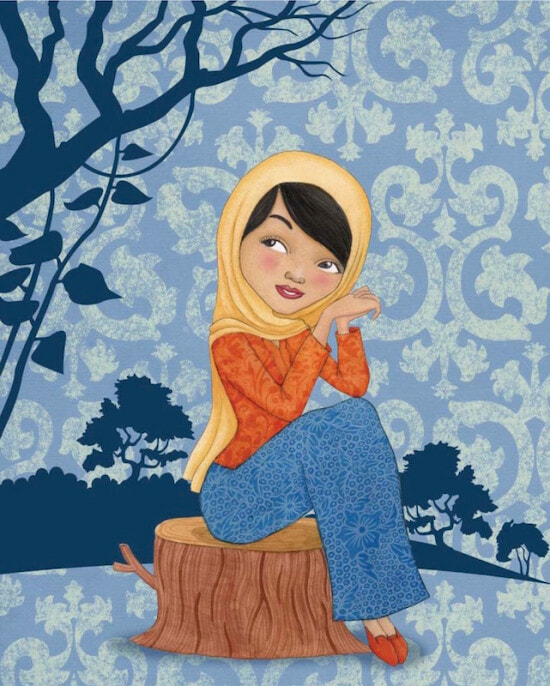 This is the story of a girl whose beauty made an evil queen so jealous she would cast a spell on her. Sound familiar?

The story goes that a kind and wealthy merchant had found a baby girl in a sampan floating in a river near his house. The merchant and his wife took the girl in and named her Bidasari. Of course, she grew up to be a beautiful young woman.

The land of Inderaputra was ruled by a handsome king and a very vain queen. She would send out her handmaidens in search for anyone who was more beautiful than her. One day, they came across Bidasari and took her to the queen. The jealous queen beat the girl and cast a spell on her where she may only wake at midnight but by dawn, she would fall into a deep sleep. And so, Bidasari slept all day and only woke at the stroke of midnight. 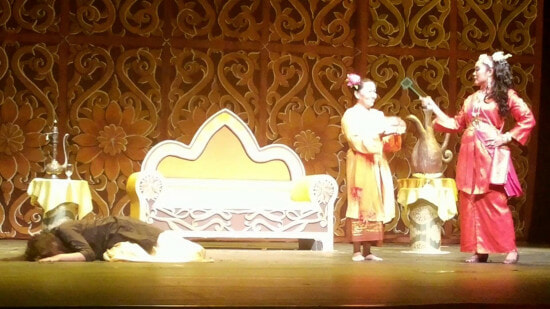 To protect her from the queen, the merchant and his wife built her a palace deep in the forest, so deep that it would take two days’ journey to reach. One day, the king came across the palace during a hunting expedition. Curious, he entered the palace and saw Bidasari fast asleep. He watched her until she woke during midnight. Upon seeing the king there, Bidasari told him everything that happened. The king then married Bidasari and they lived happily together in the magnificent castle. The spell on Bidasari was broken. Take that, evil queen!

And there you have it. These are a few of our very own princesses in Malaysian folklore that frankly speaking, deserve their own movies. I mean, wouldn’t it be cool to see a ‘demure’ Malaysian princess leading a fight against colonists? PS: Some of them were even real people in Malaysian history!

If you liked what you’ve read, look out for part two of this series as we list more badass princesses of Malaysian folklore.