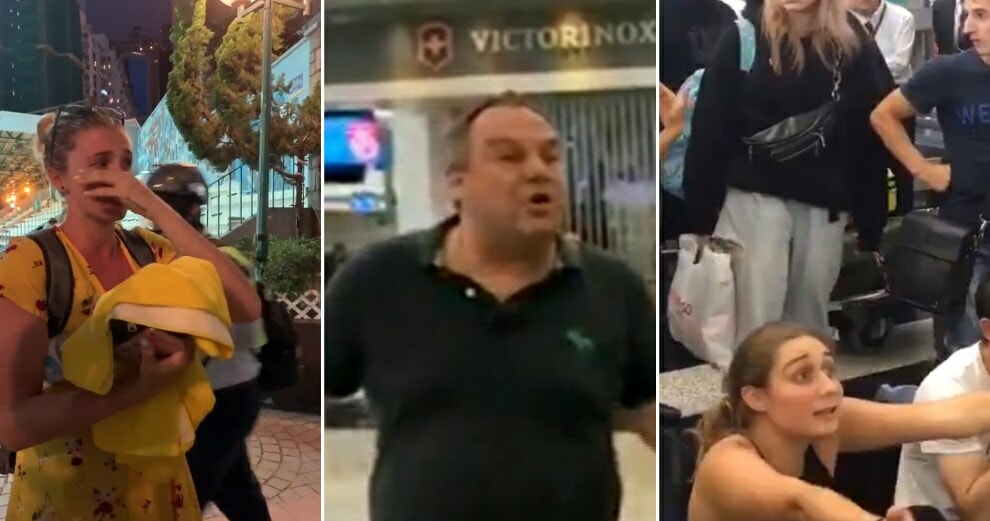 Earlier in June, protests began in Hong Kong in opposition to an extradition bill that has since been shelved. While the bill was suspended, Carrie Lam, Hong Kong’s Chief Executive, has still not formally withdrawn it.

Now, protests have expanded across the city, with Hong Kong citizens demanding an investigation into police brutality, democracy, and overall political reform.

Over the past two days, tensions rose once again after protesters staged a sit-in at the Hong Kong International Airport, causing hundreds of flights to be cancelled. However, the airport resumed operations earlier today (14th August) after clashes with police officers on Tuesday night.

Hong Kong Airport protesters – “We are Fighting for the Future of Our Home” pic.twitter.com/N9DIV4kO1R

As a result of these protests, many travellers were left stranded at the airport.

Videos of foreigners complaining about the protests soon began to go viral. Three videos, in particular, one of an Australian tourist arguing with protesters, another of an expatriate from South Africa upset over the protests, and one of a tourist from Turkey angry protesters at the airport, have been circulating on social media.

The video fo the Australian tourist shows him in a heated exchange with protesters. He can be heard telling them to “get a job” and that the protests would be bad for businesses and their economy, to which the protesters replied, “You are upset because your flight was delayed. We are upset because our system is corrupted.”

#HongKong protesters got in the way of a foreign tourist in #HK airport after all departures were canceled due to sit-in protests. The tourist fought back: "Hong Kong is a part of China!" "Go get a job!" #香港 pic.twitter.com/Ylso5Xykfx

Netizens soon began to criticise the Australian man for not understanding the reason people in Hong Kong were protesting in the first place.

Translation: “I’d like to do business here; now can’t you pesky kids roll over and accept a dictatorship, that would be way easier for me to make money. And then when I’m done I’ll go home and enjoy my freedoms in #Australia.”

Guy from free country tells young people to go live under an authoritarian regime, because it inferes with his business and travel. What a selfish *****.

So a foreigner, who doesn’t live in the country where he travels, wants to give « moral lessons » to locals about democracy and their lives in their country?

Another video that went viral shows a South African woman tearfully expressing her distress over the protests, saying that she moved from her country to avoid a similar issue happening there. She can be heard saying,

“South Africa has this, I don’t want this. This is not the Hong Kong I’ve learned to love. Everyone in Hong Kong is so welcoming to all foreigners and then to experience this, it hurts me. It really hurts me.”

“I appreciate what everyone is fighting for, but this isn’t what it’s supposed to be like. This is not the Hong Kong I want to be in. I would rather go back to South Africa if this is what I’ll be living with for the next few years. It’s unacceptable.”

She said she lives in the area, and explained: “I came from South Africa to move away from this… I don’t want this. This is not the Hong Kong I’ve grown to love.” pic.twitter.com/q8rO0Jxnbo

This video was also met with comments from netizens criticising the woman’s reaction to the protests, calling her privileged and entitled.

These are the type of white people who say they love diversity but don’t actually want to understand or know what it’s like to experience the issues of diverse cultures.

She wants people to stop fighting for their rights so that she can feel comfortable in a country she’s not even from?😂😂😂

I’m a HK expat of South African descent and this woman is an embarrassment. If she loves Hong Kong so much she should understand what the protesters are fighting for. She should leave if she’s so unhappy/clueless. And yes, I hope she reads this.

The video of a tourist from Turkey who was stuck in Hong Kong while in transit to Thailand is also circulating. The woman can be heard blaming the protesters for causing stress to travellers.

A group of tourists have been stranded at the #HongKong International Airport since Monday. A 21-year-old female, who came to the city in transit for Turkey from her trip to Thailand, said it is the protesters who causes all the stress and all the fight. pic.twitter.com/JafMrxdT0Q

I feel ashamed for this woman . She doesn`t care about the normal peoples search for freedom and human rights. She only cares about her own holiday trip. I hope she never visits germany, we dont need people like her. #HongKongProtests

Of course it’s “the protester’s fault” she’s upset! If they would all just get in line and bend over to your government then she can go continue on her merry way in peace!

How dare a fight for freedom interrupt her travel plans!

How dare Hong Kong protest for their rights! 😠

Stay tuned for more updates on the situation in Hong Kong. 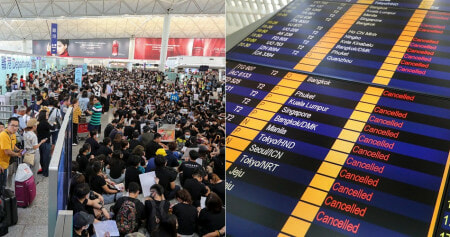