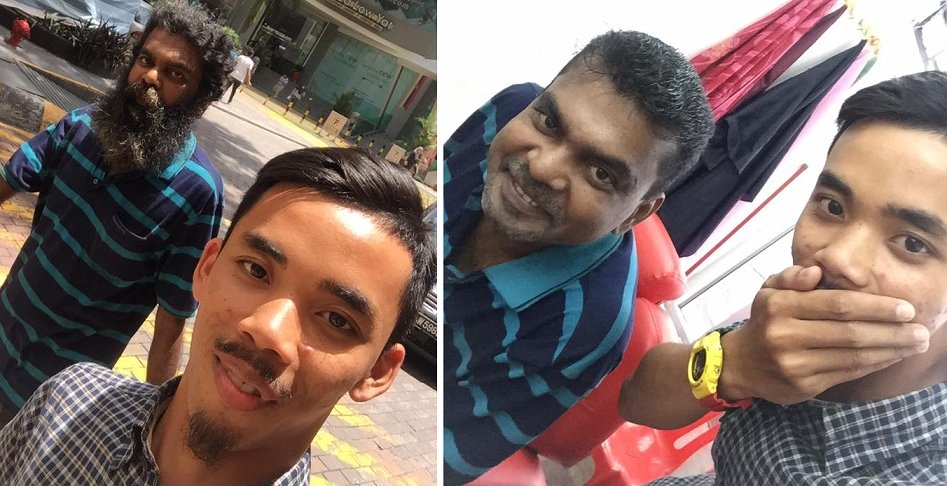 If you’re familiar with the streets in Kuala Lumpur, you would know that there are plenty of people who call the streets their home. Most people are afraid to even go up to them, let alone be friends, but things were different for Muhd Khairul.

The dispatcher/mail man took to Facebook to tell a story of him and his homeless friend, Ashuk Kumar.

Khairul wrote about the day he took Ashuk to his much needed haircut. Since Khairul couldn’t track his friend, he sat on his motorcycle and waited.

“Suddenly I felt someone pinch the side of my waist. I turned to my side to find this ‘crazy man’. I shouted, ”Where did you go? Aiyoooo…” Ashuk just laughed. “He didn’t know how worried I was because I couldn’t find him.” 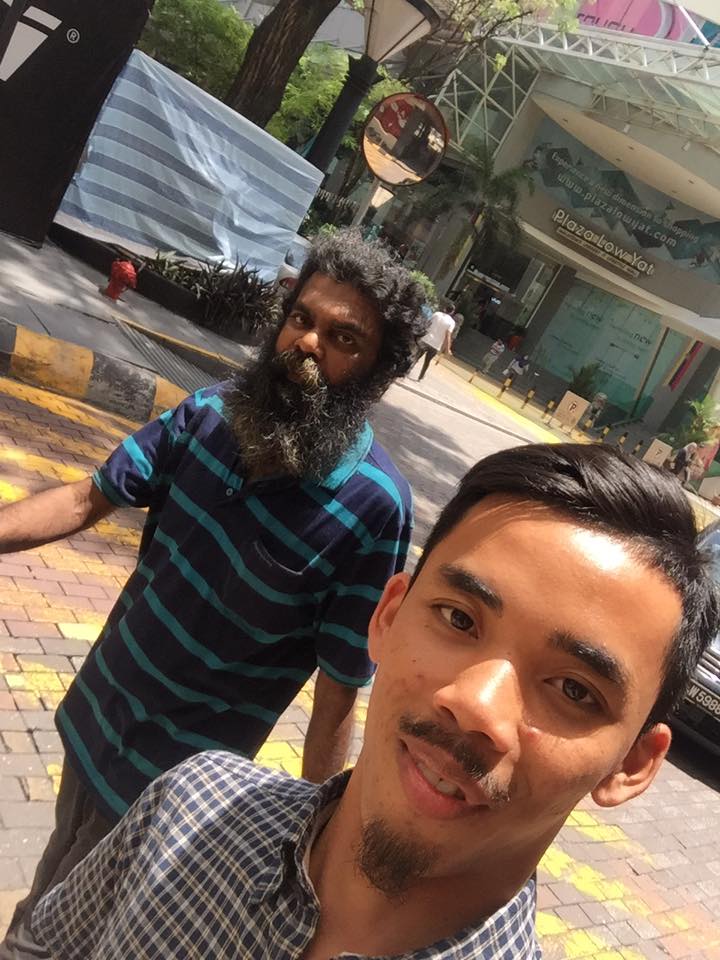 Although Ashuk refused in the beginning, Khairul still insisted to take him, causing Ashuk to relent in the end.

“While we were walking, I noticed people looking at us. It was as if I was the crazy one in their eyes. Who cares!!”

“We talked while walking there. I felt so at peace that time. Ya Allah!! Only God knows! I felt really happy even though lots of people were looking at Ashuk and I. I managed to take some pictures for memories sake. My friend Ashuk!!”

Things almost went downhill for them because the barber’s was about to close for lunch break, but Khairul had a trick up his sleeves.

“So I had no choice but give my most “gangster” face… though it didn’t really work. “Hey bai you cut my friends hair first la, you can go eat later,” I said. Ashuk couldn’t stop laughing, till he was in tears. The man straightaway agreed to cut his hair. When Ashuk was cutting his hair, I took some selfies because this is a memory that I will never forget.” 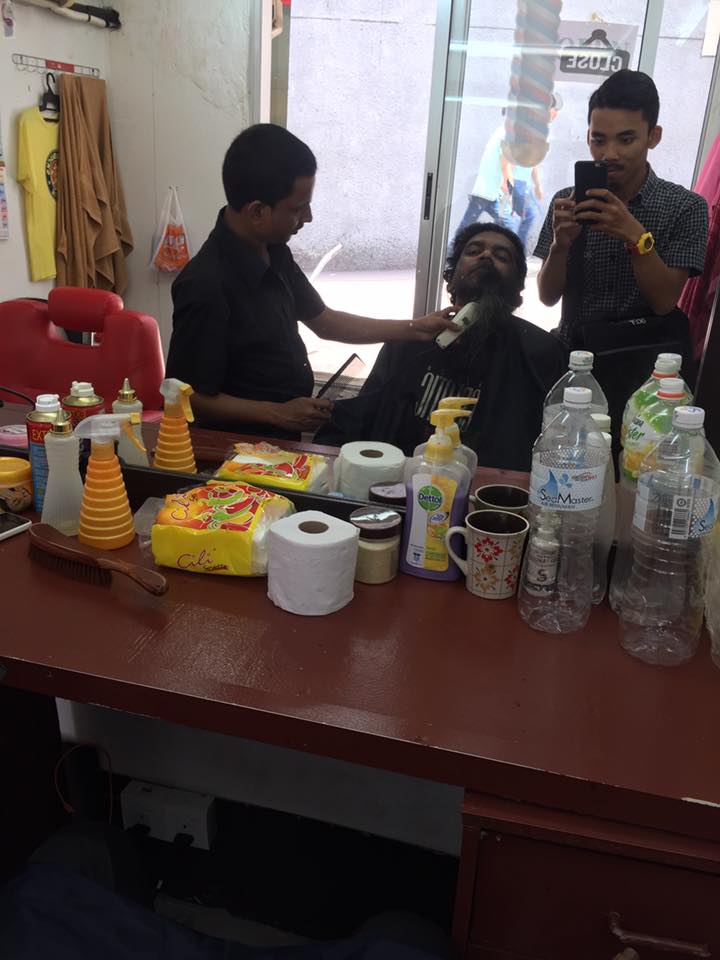 Once they were done at the barber’s, they walked around talking about anything and everything.

“Ashuk said he was going to look for a job. I didn’t know how I could help in that aspect. I’m so sorry Ashuk. He said he’ll walk around to find any vacancies. I started worrying about where he was going to bathe later. But he convinced me that he can bathe in the public toilets here.” 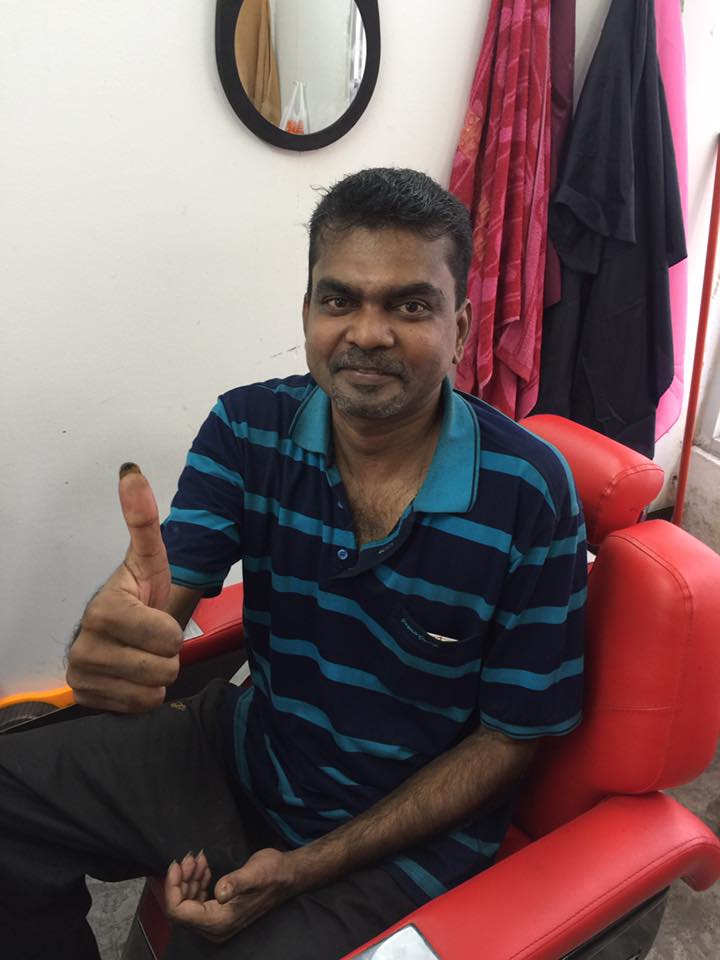 Khairul’s lunch break was almost up and he had to get back to work and Ashuk understood that.

“As usual, before I leave I pass him a few notes straight into his pocket for him to get soap, comb, toothbrush, food and all. But he declined it a few times.

““Don’t make me sad Shuk…” I said and in the end he took it. He got scared that I won’t come again to see him so he gave me a piece of paper and asked me to leave my number. Alhamdullilah.

“He hand his hands on his chest as if he was saying thank you. I smiled.

“I don’t know how to return your favours,” Shuk said while bowing.

Khairul assures Shuk that whatever he did for him is sincere and he just needed Shuk to repay him by praying for him. 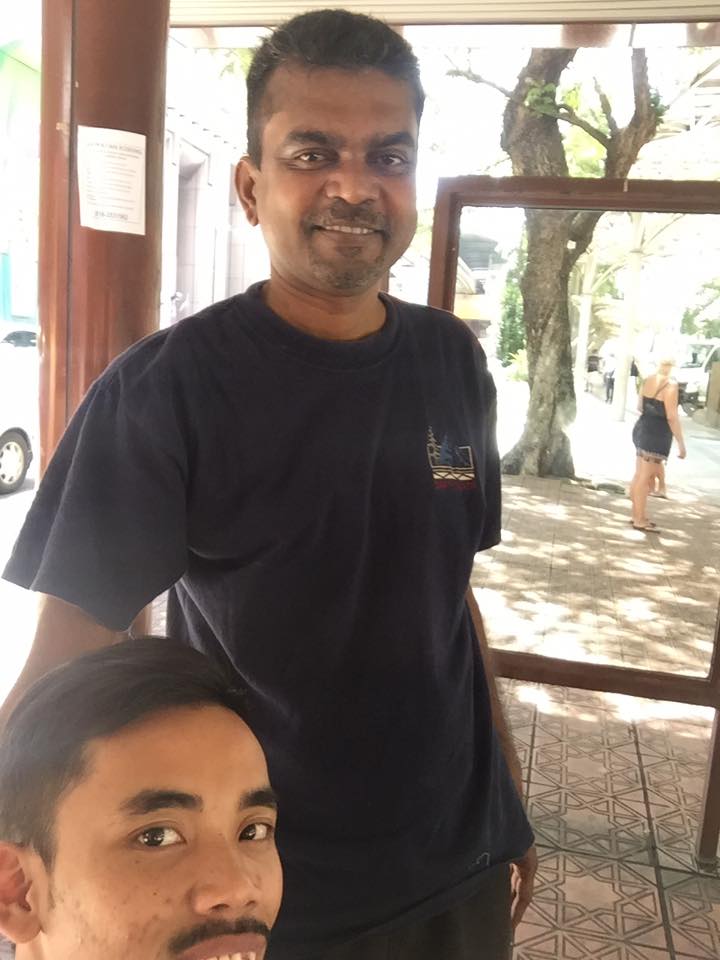 In his post, Khairul also asked if anyone knew of any job openings for his friend. Stating that the job doesn’t matter, as long as Ashuk is working.

“He just looks tough but he too sheds tears. I choked up writing this, the story of me and my friend Ashuk Kumar. Try to understand the lives of those who have less. Be grateful…

“I share these videos, pictures of Ashuk before and after is transformation. He is my friend Ashuk Kumar. God willing if given the opportunity I will continue to tell the tales of me and Ashuk Kumar. Pray he gets a job. He sends his regards to all.”

The deeds done by Khairul deserves to be praised as not many are able to do what he does. Bless the both of them!