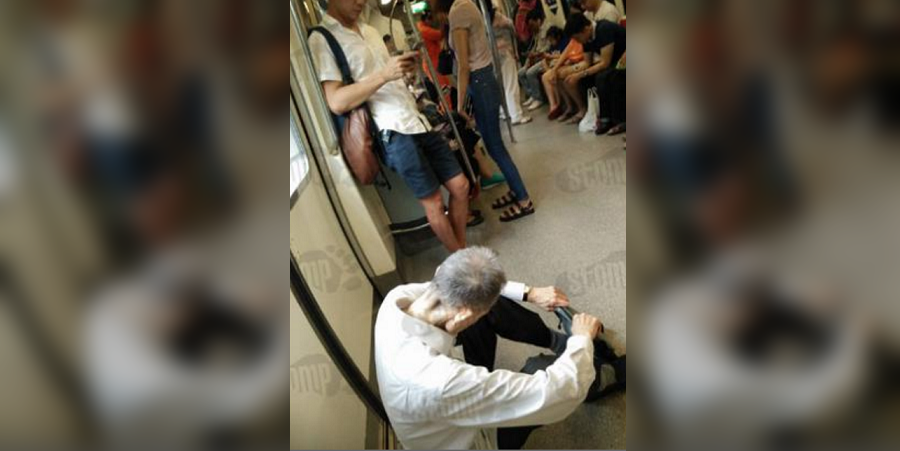 We grew up being taught to be courteous and considerate. This especially applied when we are to give priority to pregnant ladies, women with young children, the elderly and OKUs for seats onboard a train or a bus.

However, a Singaporean male by the name of Kelvin shared a truly heartbreaking post of an old man onboard the MRT train.

In the image, the man is seen slumped over while he sits on the train floor. 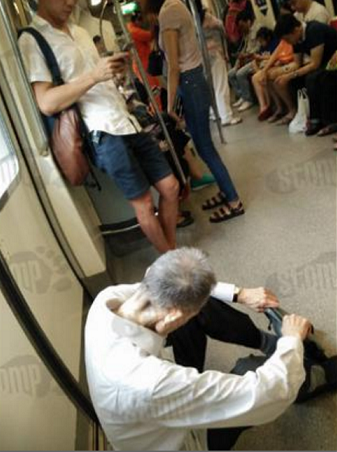 Apparently, the elderly man was forced to do so after no one had offer their seats to him. With no seats to rest his frail body, the old man sat himself down on the train floor to rest while he waited for his stop.

Kelvin had shared his post to Stomp, stating that the incident happened around 6pm, which was rush hour. It was on the train travelling on the East West line from City Hall to Jurong East.

It’s unclear if anyone gave up their seats for him afterwards, but the image Kelvin shared definitely broke hearts as the elderly man had to go to the extent of doing that since no one was considerate enough to give him a seat.

Netizens were outraged at such a sight, expressing their heartfelt sympathy for the man.

“Maybe everyone else on the train was paralyzed, that’s why they need the seat more than this old man!” one sarcastically said.

“See. Everybody is busy looking down at the phone… all very busy that’s why.” another user wrote.

However, it was revealed that an uncle later did offer the elderly man a seat but the man declined.

Any how, this just goes as a reminder for all of us to be considerate and aware. Some times we may get too engulfed in our own devices that we don’t realize what’s happening around us, even when there’s someone who needs help.