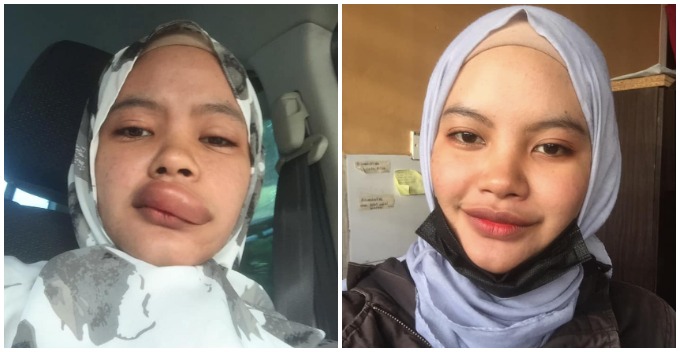 Insects bites and stings reactions usually result in a small, normally itchy swelling here and there, and probably a tiny scar from the bite. But little did this lady know that a small bite from an insect would cause a major reaction with swelling on her lips!

Facebook user Rambut Jelita, also known as Kak Ida, took it into stride and posted the unfortunate yet funny incident on Facebook. 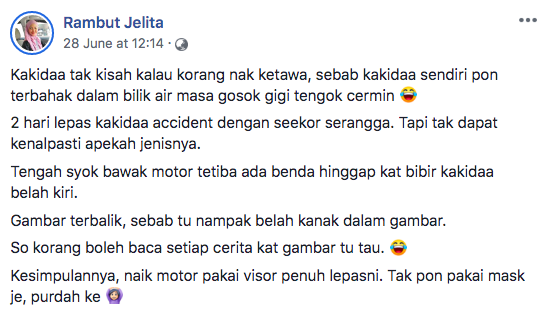 “I don’t mind if you guys want to laugh, because I, myself, chuckled looking at my own reflection on the mirror while brushing my teeth.

2 days ago, I had an accident with an insect. But I have no idea what kind of insect it was.

It suddenly landed on the left part of my lips while I was riding the motorcycle.

The picture is mirrored, that’s why it looks like the right side of my face looks affected.

Read the story based on my caption for each photo okay.

The conclusion is, wear a full visored helmet the next time riding a motorcycle. Or, maybe a purdah.” 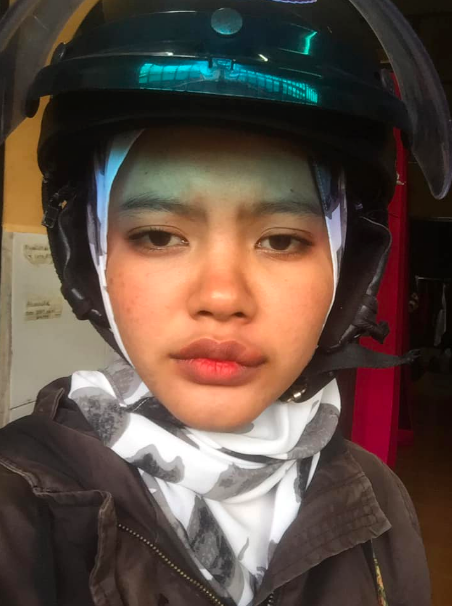 She started off by recounting that she was on her way to the salon she works at on her motorcycle. En route, she suddenly felt an insect land on her lips while enjoying her morning commute.

Arriving at the salon, Ida noticed the left side of her lips was slightly swollen. She didn’t think much of it first and proceeded with doing her job as usual. 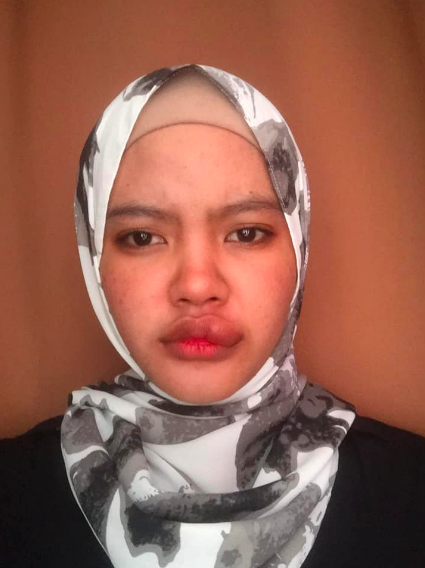 Several moments later after sweeping and mopping the floor, she realized that the swelling had gotten worse. Not only that, her armpit had started to itch, which she assumed was caused by her sweating. However, she then noticed that her arms were starting to itch too. 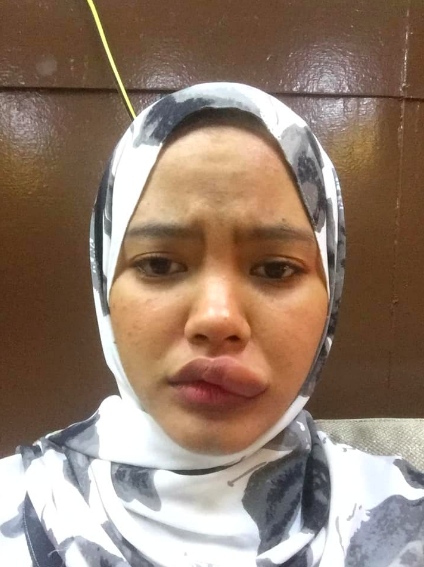 She continued working and noticed that the swelling had gotten even worse than before. The itchiness, on the other hand, was starting to become unbearable. At that point, she considered seeing the doctor. 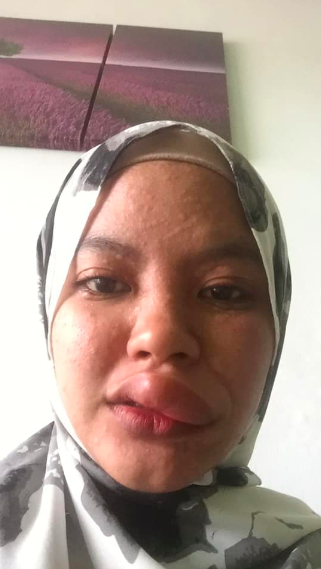 Kak Ida finally went to a clinic. There, she noticed that she had broken into hives and her lips were humongous!

After seeing the doctor, she waited in the waiting room for her medication. She felt embarrassed by the state of her face. Kak Ida also said that she felt uncomfortable and nauseous as the doctor had jabbed her with medication. And the itchiness? It was itching like crazy!

There, a guy conversed with her, telling her about the time he was stung by a bee when he saw her condition.

“I was already dizzy, and the man insisted on telling me his stories three times. I feel like sellotaping his mouth shut. But I guess it was fine. At least there was some entertainment during this very stressful moment.” 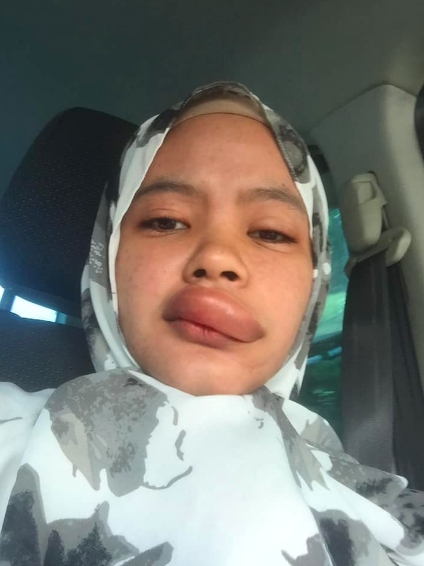 She got an MC and made her way home. Her eyelids were starting to swell as well by that point.

In this photo, she expressed that she was feeling stressed, as she was teased by her brother. She feared that the swelling would stay on her face for the rest of her life!

The following day, Kak Idaa decided to wear a purdah for her trip to the pharmacy as there were no masks at home. We wouldn’t get out of the house barefaced in that situation too. Yikes. 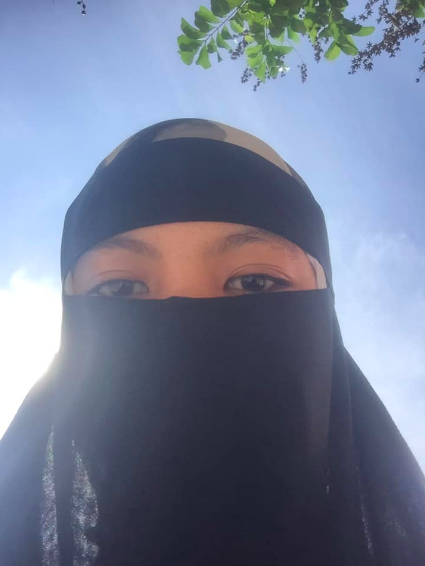 Later that same day, the swelling had remarkably reduced while she was out for work. Although there was still some swelling on the left side on her face, it was unnoticeable. Thank God. 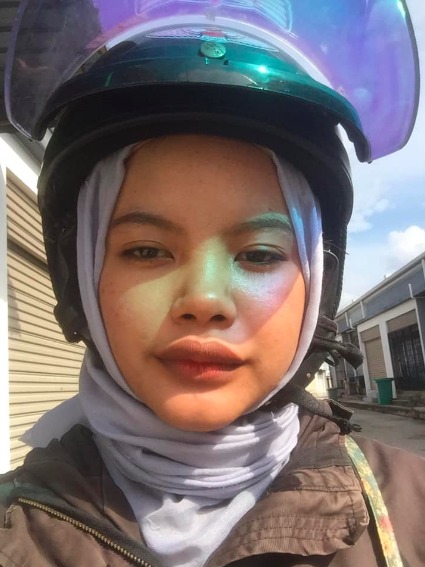 By the next day, Kak Ida got a whole lot better! 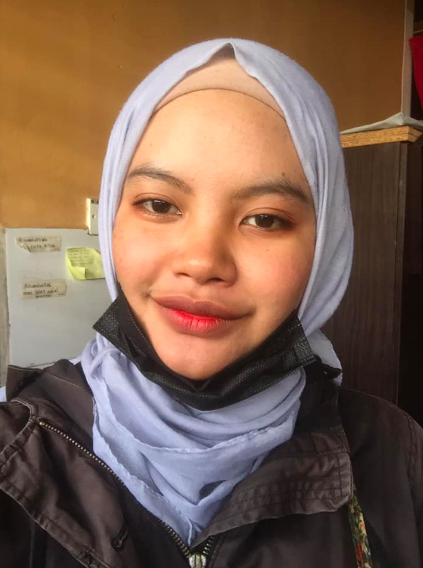 Her Facebook posts had netizens in stitches over the hilariously humongous swelling. Here’s some of it!

“I’m sorry, Puan. I laughed at this because it actually reminded me of Stephen Chow’s movie where he got bitten by a snake in Kung Fu Hustle.”

Fortunately for Kak Idaa, her allergic reaction was not life-threatening.

Remember guys, if you were to ever be bitten or stung by an insect, never forget to administer first aid care. If the condition has gotten worse, quickly go and refer to the nearest clinic or hospital available!

Also read: 2yo Boy Risks Amputation After An Insect Bite on Leg Gets Infected with Flesh-Eating Bacteria 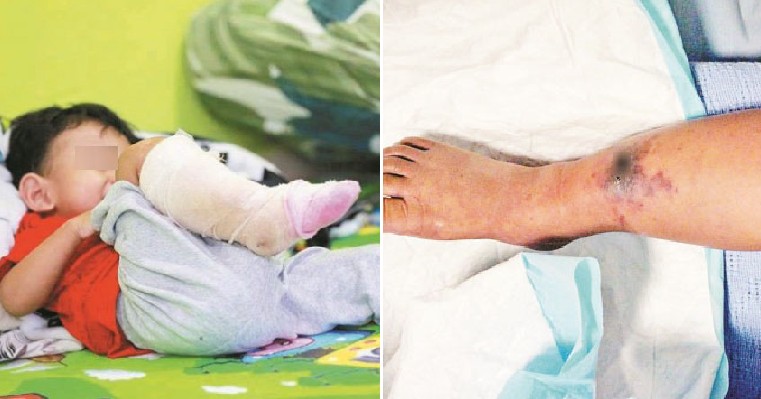