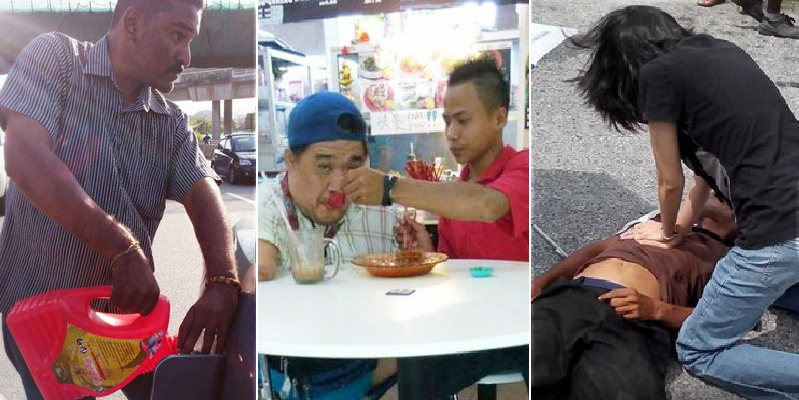 Heroes don’t always wear capes, badges, or uniforms. In fact, they reside in all of us and with a little courage, you’ll be surprise what you yourself can achieve. Be it a big or small deed, you may not realize how a helping hand and genuine heart could mean the world for someone else, and in turn inspire every one of us.

Check out these 6 courageous everyday Malaysian heroes who stepped up to help someone in need.

1. The Uncle Who Kept His Promise 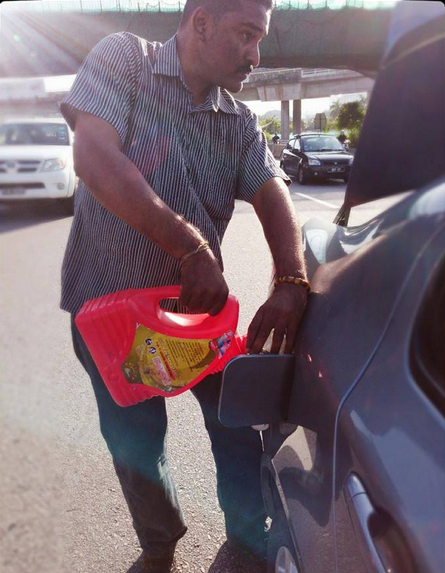 One selfless uncle Vaasu Thevan saw a young lady driver in distress as her car stopped right in the middle of Federal Highway. Unlike everyone else who just zoomed past, the uncle stopped his motorbike to help out, while she explained that her careless self didn’t realize her car was low on petrol.

Although he knows that there are some stereotypes about his skin tone, he bravely disregarded any bad notions anyone might have and said he ‘would always lend a helping hand regardless if people doubted him’.

Upon hearing her explanation, the kind uncle asked her for some money to buy petrol for her. He promised her “You tunggu saya. I mesti balik punya.”

In desperation, she trusted the uncle and gave him RM50. Time went by and he was still no where to be seen. The lady began to worry that she got cheated. But 25 minutes later, the uncle appeared with a bottle of petrol.

The most touching part was, Uncle Vaasu was actually on his way to work, but he sacrificed going into work on time just to help the poor stranded girl.

2. The Man Who Educated the Public About Touching Dogs 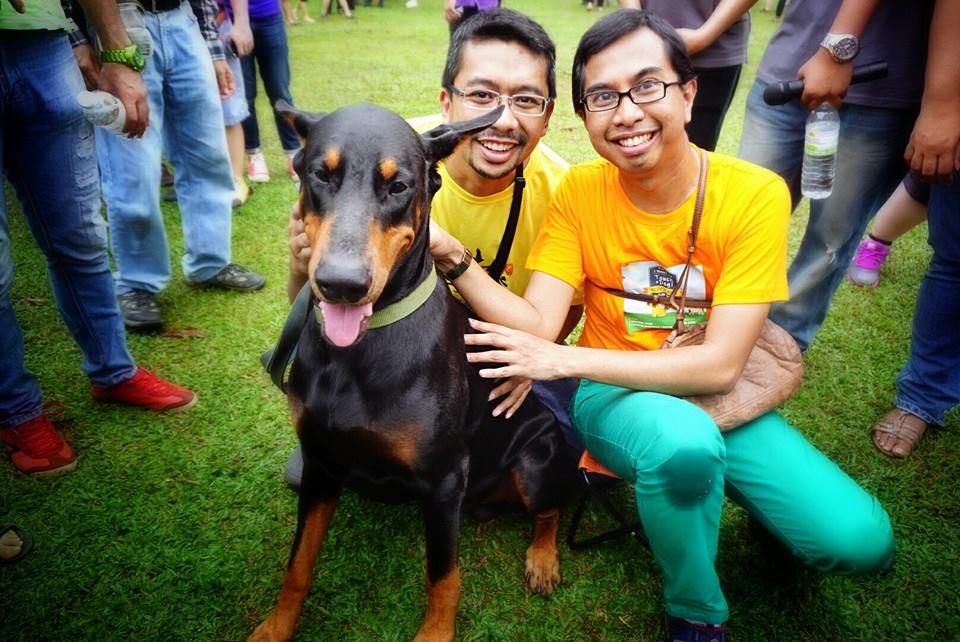 While touching dogs are considered a ‘taboo’ for Muslims, social activist, Syed Azmi Alhabshi wanted to teach the public especially the Malays to love these animals and that it’s okay to touch them as long as they properly cleansed themselves after (sertu or samak) – with earth then 6 times with clean water.

Despite knowing the trouble he might get himself into (from receiving a ton of criticisms to death threats), the courageous man organised a spontaneous ‘I Want to Tough a Dog’ event back in 2014 in Central Park, Bandar Utama that was very well-received by Malaysians, garnering over 800 attendees! The event was ultimately aimed to break the negative perception on dogs especially to Malays, and it did just that as attendees had the opportunity to understand and pet the dogs there.

“I don’t know whether people will now understand not to throw stones at dogs but we want people to know that if they are not knowledgeable or are curious about things, they should just ask.” said Syed Azmi. 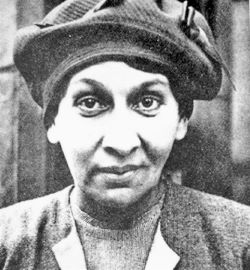 Astoundingly, Sybil Kathigasu was never once mentioned in our sejarah textbooks… yet Google and the British honored her in the best ways possible. This year, Google doodle spotlighted the brave woman in the Google homepage in conjunction with her 117th birthday, while the Brits gave her an award for courage called the George Medal – the 2nd highest award for civilian courage. WOW!

So what did she do to receive such an amazing award? It seems during the Japanese occupation in Malaya during WWII, Sybil and her husband Dr. Abdon Clement Kathigasu secretly supplied medicine and medical aid to resistance fighters!!! She even spied on the Japanese by secretly listening to the radio of overseas broadcasts and passing the information to Malayan People’s Anti-Japanese Army (MPAJA).

The couple were finally caught in 1943 and was imprisoned. She endured gruesome tortures to extract information out of her, of which included beating, burning from hot iron rods and having all her fingernails pulled out. She even suffered from partial paralysis from receiving strikes to her spine and a broken jaw from being kicked. Yet, she never once said a word. Amazingly, the hero survived, truly worthy of the George Medal.

4. The Teen Who Helped Others During His Own Tough Times 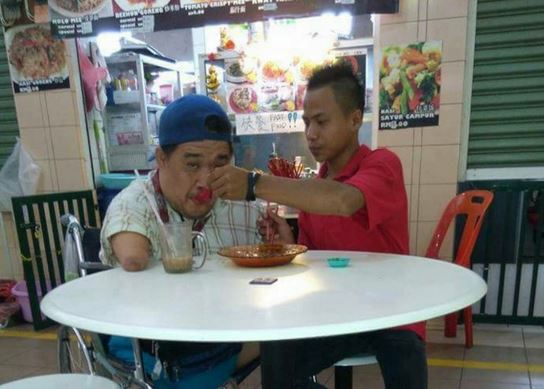 During the holy month of Ramadan, seeing food and drinks would stir the hunger and thirst in someone who is fasting. But one Malay teenager defied all temptations and whatever negativity that may befall on him by helping a disabled Chinese man with his meal.

Regardless of how hungry or thirsty he must have felt, that didn’t stop him from being a kind soul. He spoon-fed the man until he completed his meal, and he did it oh so patiently. Not to mention he proved the haters that ‘you-cannot-eat-infront-of-me-because-I-puasa” notion wrong, and that Malaysians of all races can indeed live in harmony.

5. The Girl Who Rushed To A Stranger’s Aid 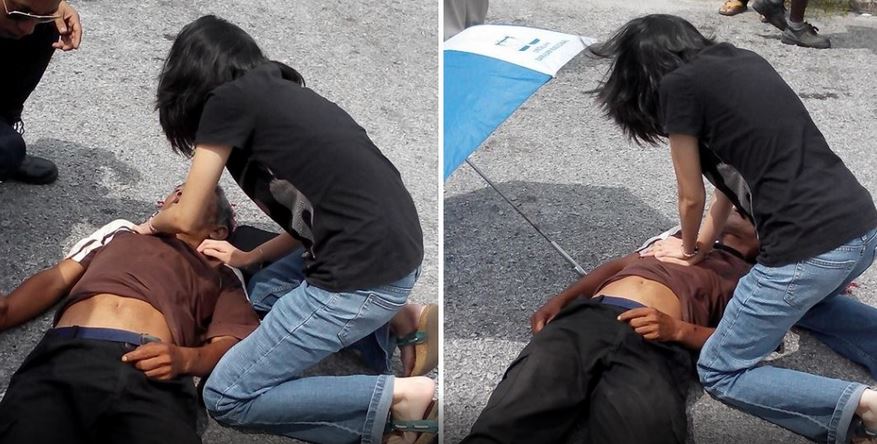 When elder man was run over by a bus, a brave young female student who was present at the scene rushed to his side without a moment of hesitation and immediately dropped to her knees and performed CPR on the unconscious man.

The uncle known as Pakcik Shah Petai apparently came out of nowhere and the bus could not avoid hitting him. Throughout the whole CPR process, the girl can be heard calling “Uncle! Uncle!” in hopes of waking the elder uncle up.

Unfortunately, Pakcik Shah never regained consciousness. Regardless, netizens were extremely touched by the girl’s persistence of helping a total stranger.

6. The Farmer Who Saved 8 Malaysian Airmen 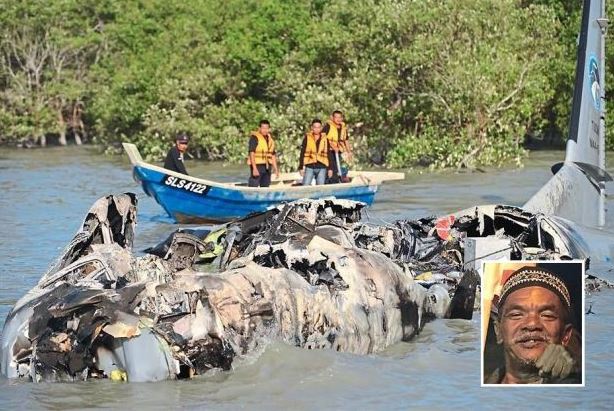 57-year-old Abu Hassan Abu Latiff was a cockle farmer who usually spent his time around the coastline of seas. He was working odd jobs around the coastline when he witnessed a plane, CM235, crash into the waters. Courageously, Abu Hassan tried to save all 8 people in the crash even though the aircraft was engulfed in flames and thick smoke.

The 8 airmen made it out alive but unfortunately for the hero, Abu Hassan never surfaced from the waters as his own foot got caught in the mud after saving the men. Now that’s a service above self.

Thanks to the selfless and courageous act of Abu Hassan, 8 men were able to live and the air force officers will always remember him as ‘hero’.

These 6 courageous everyday heroes prove that you and I are just as capable as anyone else. Got a courageous story you’d like to tell? Share it with us by submitting your story to Allianz Facebook Page Post with hashtag #HumansOfCourage and stand a chance to win 2 premium Adidas jerseys (that can be personalized with you and your courageous nominee’s name). 15 of the best stories will be selected so there’s plenty of these premium goodies for everyone! 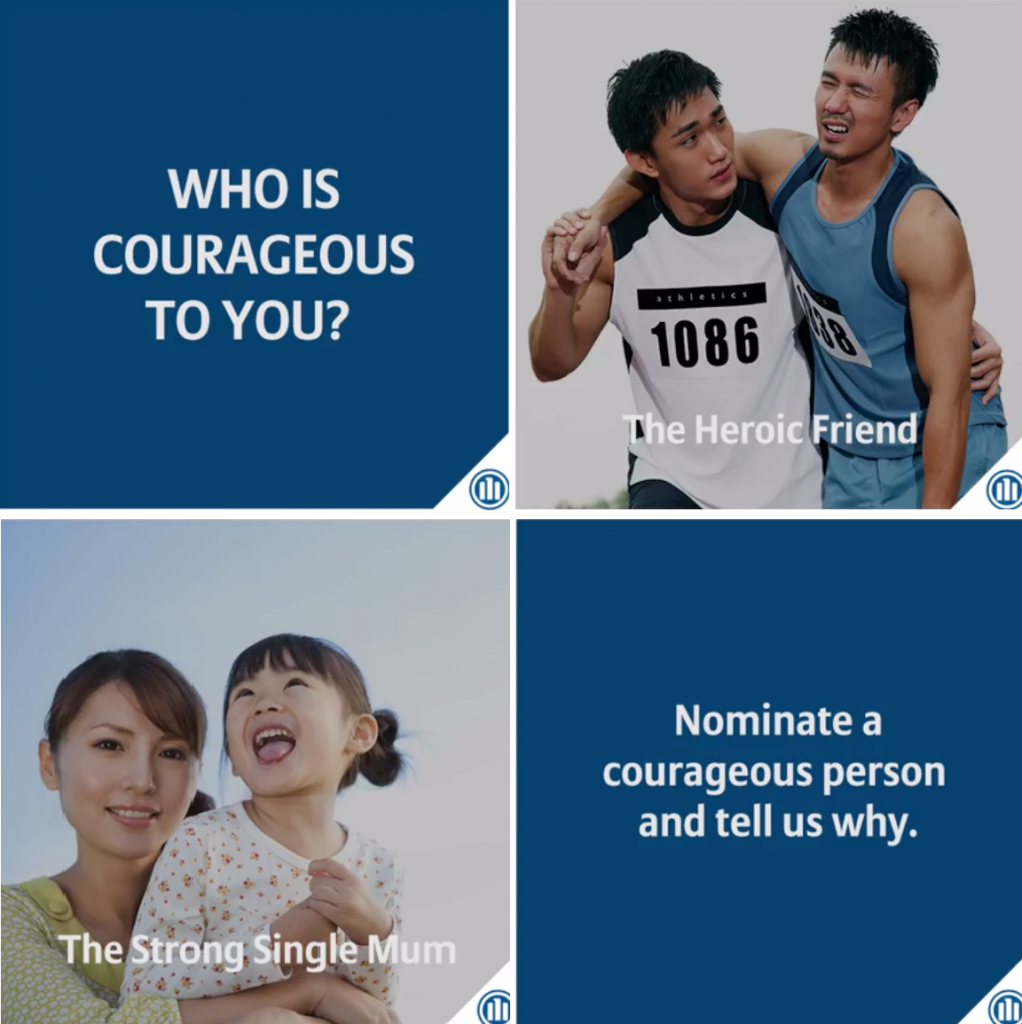 Dasrite, your story could be anything inspirational that you or someone has done. However small or big the acts may be, we want to hear them all from you! No need malu one. Share the positivity and inspire the nation by dropping your stories here now!