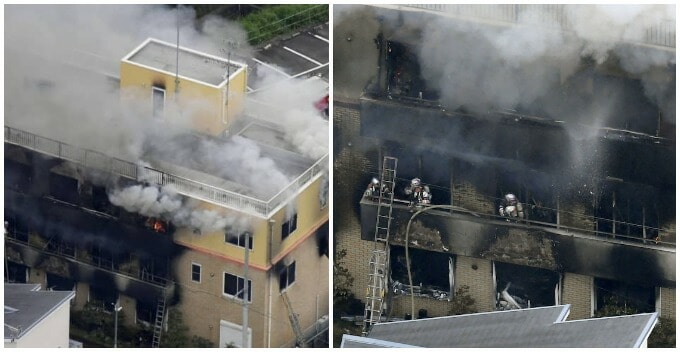 Heartbreaking and tragic news to all anime lovers out there! KyoAni, one of Japan’s most famous animation companies, was reported to have been the target of a suspected arson attack earlier today.

According to Mainichi, the studio was seen engulfed with smoke on Thursday (18th July) at around 10.30 am. A fire accompanied by an explosion occurred at the animation production company Kyoto Animation in Kyoto.

Police have said that at least 12 people have died of the arson attack and nearly 40 were injured, several of whom were unconscious. Many of the bodies were found on the second floor of KyoAni’s three-story studio. It was said that there were around 70 employees inside the building when the fire started. The Kyoto City Fire Departement also reported that 12 people had cardio-respiratory arrest, a term used in Japan to signify a victim’s death before it is really certified. It was said that there are other missing people and some still trapped inside the building.

Police said that there were some witnesses proclaiming that they saw a man screaming “Die” as he lit the fire. They had also found knives at the crime scene but it is not known whether they belonged to the suspect.

The 41-year-old man, who admitted that he was the one who set the building on fire by pouring gasoline-like liquid around the building, was among the injured and was taken to the hospital, according to the police.

According to Japan Times, people around the studio had heard a series of explosions and saw black smoke billowing out of the building. People were later seen carried out of the studio covered in blankets.

“A person with singed hair was lying down and there were bloody footprints,” said a 59-year-old woman who lived nearby.

“I heard a bang. The black smoke rose and the burning smell was awful,” said a hair salon manager in his 30s.

It was confirmed that one of KyoAni’s staffers, Yamada Naoko (Liz and the Blue Bird, A Silent Voice), managed to escape the ordeal safely.

Kyoto Animation, or widely known as KyoAni, was founded in 1981 and has produced numerous animations. Some of the popular anime series produced by the studio are K-On!, Suzumiya Haruhi no Yuutsu (The Melancholy Life of Haruhi Suzumiya), Koe no Katachi (A Silent Voice) and Violet Evergarden.

We hope that the Japanese authorities will get to the bottom of this terrible incident. Our thoughts and prayers for all the victims and those who are affected by this.

Also read: Look at Our ‘Jalur Gemilang’ Reimagined as a Badass Anime Character for Tokyo Olympics