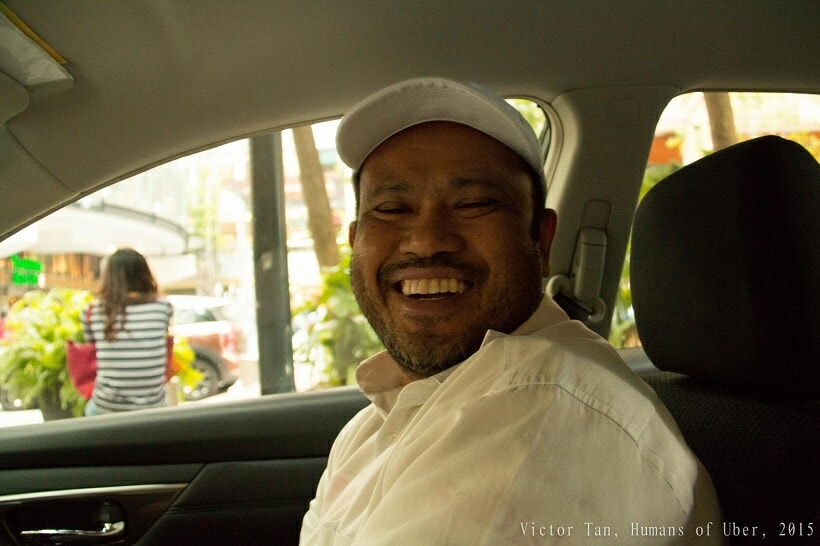 I only managed to take Uber twice (to and fro), and they were both moderate experiences. Don’t get me wrong, the ride was great! The car arrived very quickly, and inside was kept clean and fragrant which kept any passenger comfortable. However, the ride wasn’t what I imagined it would be, as I thought there were be more conversations going, and I would be able to understand more about each driver. As I tried to come up with some small talk, I found the drivers responding in short answers that didn’t really gave me anything to go on. Exasperated after a few tries, I sat quietly in my seat for the rest of the journey. Better luck next time I guess.

Although coincidentally my drivers weren’t the talkative type, some passengers had better stories to share!

Taken from Humans of Uber managed by Victor Tan, who’s a Malaysian student studying at The University of Chicago in the US, here are some of the stories of Malaysian uber drivers and passengers:

(Note: Humans of Uber is not exclusively for Uber partner drivers – It’s more to convey the spirit of ridesharing which includes passengers, Lyft and taxi drivers as well.)

1. This was on the way to a mamak stall

‘Andrew’ wanted to remain anonymous for the purpose of this interview because he didn’t want his friends to know that he was driving an Uber, hence the picture of his hands but not his face.

“I’m a pensioner. I used to run karaoke (KTV) lounges in Malaysia, many of them across the country. I did this business for fifteen years, and I had everything that a young man could ever want: Power, money, women.
I had all of those things, and more. I was a playboy, and I enjoyed it. It was a good life, but that age has come and gone: Now it’s time for the younger generation to have these experiences, to use their energy and fight their own fights and find meaning within their own lives.”

“Are you doing this to supplement your retirement income, then?”

“Actually no, whether I drive or not makes no difference: I’m a millionaire. We still own the karaoke bars; it’s just that my son handles the business side of things now.”

“What I’m trying to say is, I do this because I’m bored: There’s no other reason.” 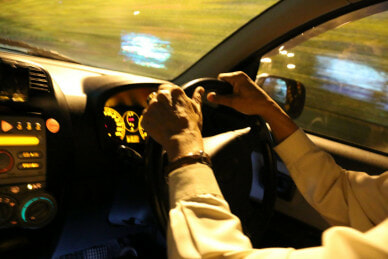 “I divorced several years ago! No wife, no kids… That’s freedom! *Laughs*

…But yeah, I used to be a chauffeur: I’d drive the datuks and datins as they’d go from place to place, and that meant that I didn’t have my own time. Now with Uber, I drive just a few days a week so I can support my mother; my schedule’s also more flexible now, so I can spend more time with her.”

“She took care of me, she gave me the opportunity to get an education: I would be proud if I could take care of her for the rest of her life.

That is the freedom which I choose.” 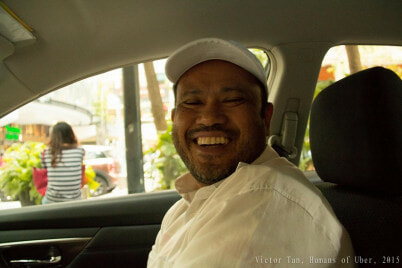 ..and you know, the kind of energy that you have at that age is insane: Then suddenly you hit your thirties and it’s all gone. Why waste time when you have it? Why listen to what other people tell you is normal? The problem with society is that people always assume that you cannot have more than one dream, more than one job – People always think to themselves that you have to be one person and not more. That is the wrong mentality, and I reject it.”

For the record, Hemant is: 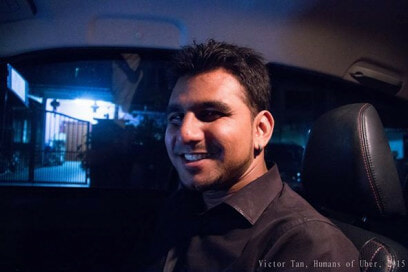 “Oh that? That’s perfume for the car. Lavender, you know? Very refreshing!”
“Interesting! Did you buy that?”
“Actually Uber sent it over – They do that sometimes. Keeps the riders happy, you know?” *laughs* 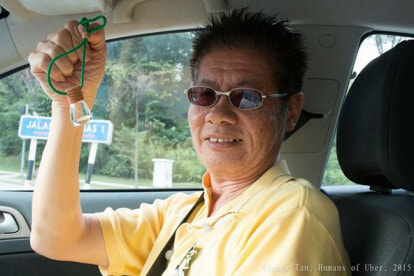 What’s your opinion on Uber?”
“What’s Uber?”
“Wait, you don’t know what Uber is? You don’t feel concerned that they’re stealing your livelihood, stopping you from living life properly? It’s all over the news dude, cab companies are fighting against it like crazy!”
“I mean, I’ve really never heard of Uber before so I can’t really comment, but all I know is, as long as you work hard, you’ll get money. That’s how it’s worked for me all my life, and that’s how I’m going to keep going.” 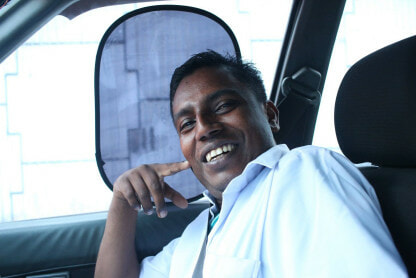 “I trade Forex for a living and have several positions open in Swiss Francs and in Japanese Yen. Each time I trade, I make several thousand ringgit.”

“Oh it’s a long story, but in short, my wife got sick of seeing me around the house: She applied for me. One day, I got a phone call, Uber told me to come in for an interview, and the rest is, as they say, history.” 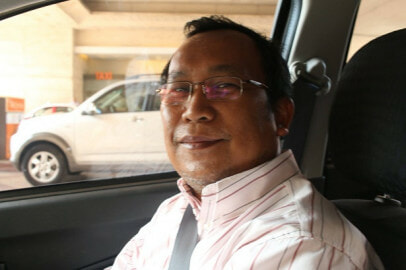 *As for some uber rider stories

7. “I graduated with a degree in accountancy many years ago, but I never really practiced.

Right now, I run a small business. I’m driving Uber so I can meet people, meet new contacts, and network with people.”

“Why didn’t you end up practicing?”

“That’s the same question that everyone asks me, haha! My dad had paid for the degree, and he was so pissed off when I told him that I wanted to go out there and do something else of my own: He phrased the question in a different way, and it went more like “Son, why won’t you just get out there and start working?!”

“Sounds intense. How did you respond?”

“Oh, I just looked him in the eye and said:

‘Dad, I can do two things. I can either listen to society and do accounts for years before getting bored and retiring from what is in my opinion a meaningless career, or I can go out there, build up my own life, and one day employ them:

Well, he let me do what I want, and it’s turned out well so far! *laughs*” 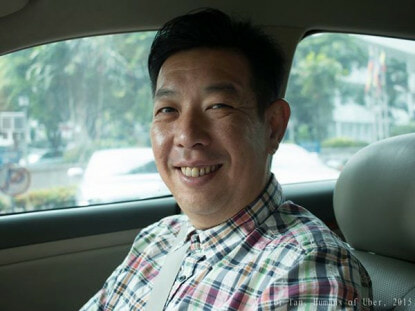 8.  Wait, you worked in Argentina? Interesting, how’d that go?

“It was great! The food was good, the people were nice, but inflation was just so damn high all the time.

You’d go to the bank, and one day the withdrawal fees would be fifteen bucks, you’d go the bank again the next day and the withdrawal fee would be thirty bucks. This would happen over and over again, day in and day out. You’d go around and around and wonder to yourself:’Why is this happening?!’ Too much money chasing too few goods, you know?” 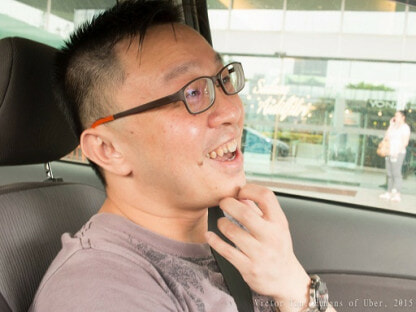 9. “Why are we going to the city? Oh, we’re running a social experiment!”

“So we work at a radio station, and the theme of our show today is ‘Random Acts of Kindness’. We’re going to go into the city today and give people compliments, do nice things and small gestures to brighten up people’s days: People don’t get enough of that in their daily lives, you know? It’s gonna be a great time!” 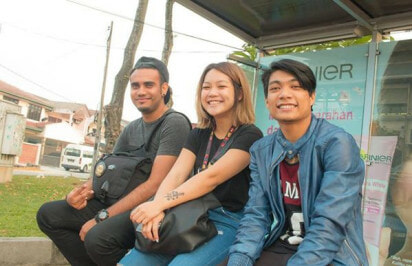 10. I’m from Denmark, and I came to Malaysia after getting my MBA from Harvard

“A bunch of friends of mine had persuaded me to come to Malaysia to work in the country’s startup community, and one of them was a Malaysian who had attended MIT Sloan’s MBA program and became my eventual boss.

My boss had put me in charge of a private equity outfit in the region that was the most unprofitable amongst all the companies that we owned in the region. I came here and at some point they made me CEO, I met my team for the first time, and I realized that there were no results although the team had been working on the project for a number of months now: I was just shocked at the entire situation, and I had asked them, “What exactly are you doing?”

“What exactly were they doing?”

“And what did you eventually come up with?”

“I decided to make a gamble. I went up to my boss, and I asked: “Can I fire everyone in the company?”, and his reaction was: “Yeah, you’re the CEO, you can do whatever you want.”

So you know what I did? I went up to all of them and I said:”Thanks everyone, but you’re fired. Tell everyone in your family that you had a good time in this part of Asia, but guess what? It’s all over.”

You could hear a hair drop in the room, and really, you just had to look at the shock on people’s faces: Some people were panicking, and some people were turning pale. They spent the next hour trying to convince me otherwise, and eventually they all agreed to stay on board after making me dozens of promises to generate results: They started working harder, smarter, faster. Right now, we’re no longer bleeding cash: We’re one of the most profitable companies in our group, and I’m proud to be leading it!”

“Yeah, sometimes you just really have to bluff. That’s the only way. *Laughter*” 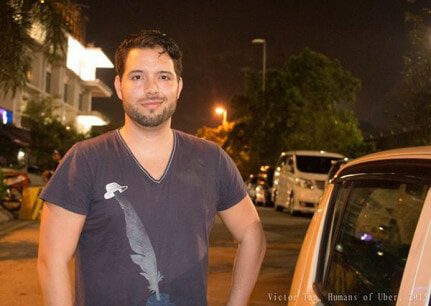 11. I came to Malaysia for work

Japan was stressful, the company offered to pay, and I jumped at the opportunity because I wanted to live a little, to try something new. The next thing I knew, I was on a flight, halfway around the world: At the end of the day, as I fell asleep in my new apartment after a company meeting, it dawned upon me that I was living and working in a world that was very different from what I had left behind.”

“How do you think the two societies are different?”

“The difference is, I see Haruki Murakami’s name in the bookstores, and his words are written in a different language. Music plays on the radio, and it’s played to a different beat, by different artists: The food here is spicier and oilier, there’s a little more zest to it that I sometimes can’t take…But you know what? At the end of the day, I find it easier to escape here.”

“I don’t know as many people here, and the country isn’t as homogeneous. It’s a little wilder here, there’s a little less order, and I like that – I like not being put in a box, not being disciplined and defined and made out to be a certain kind of person: I like defining my own life for myself. That’s what living in Malaysia has given me the freedom to do.” 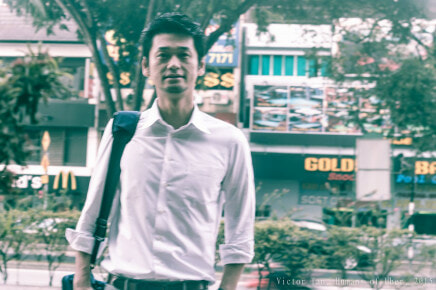