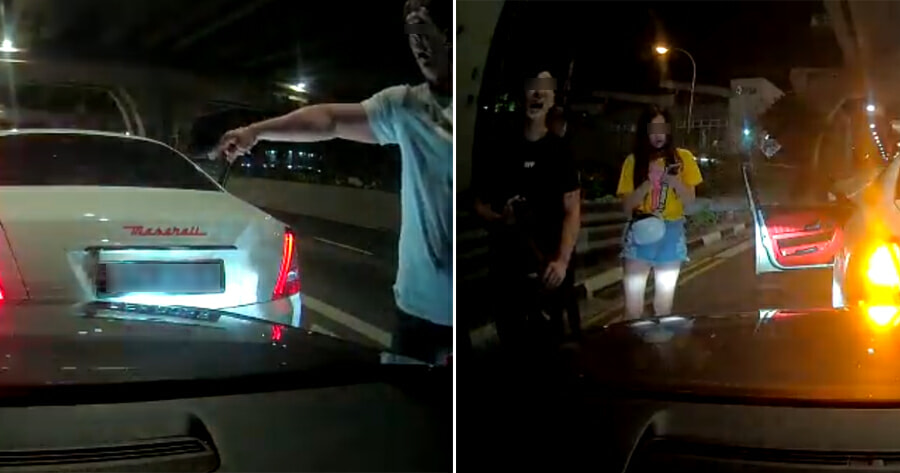 There are many mean drivers on the road that will do anything to get their way, but this one just takes the cake.

A video posted on Facebook shows a Maserati cutting in front of another car and suddenly braking, causing the car behind to collide with it. And as if it wasn’t obvious enough that it seemed to be done on purpose, the Maserati driver gets down and immediately starts yelling at the driver.

Other passengers from the Maserati also get down and start taking pictures and videos of the car like it was all pre-planned. What’s strange is that random people, who did not get out of the Maserati (guy in a black shirt), appeared out of nowhere and started yelling at the driver as well.

The timestamp on the video shows that the incident happened on 18 July at 2.49am. From the number plate of the Maserati, the incident most likely happened in Singapore.

In the caption of the video, the poster writes that these people could be causing accidents on purpose to gain money from other drivers and warns others to be aware of people like these on the road. He advises others to make a police report immediately if the same situation happens to them.

Netizens also seem to think that this was done on purpose.

“It is a case of fraud from the beginning…that lady in yellow the way she conducts herself is too obvious…too eager to take pictures and that makes people suspect there is a collaboration going on already to make a claim by staging an accident…that is a very serious offence by the way.” one netizen commented.

“It’s obvious, the moment you hit him, all jump out so fast. Normally, people will take some time to react, I felt should report to police to stop these people,” another commented.

If you see a car behaving strangely on the road, please be extra cautious as they might be up to no good. It is also always advisable to have a dashcam just in case accidents like this happen.

Also read: Watch: Motorcyclist in Puchong Kicks Car For Blocking Him But Loses Balance & Falls Down